Silver Member
I suspect it has something to do with keeping certain players from earning the points, while allowing American players to start earning some.

Gold Member
Silver Member
Ok maybe I'm wrong but wasn't the 9 ball portion of the DCC a points event as of a few years ago? They changed it from race to 7 to race to 9 for this reason.

And the zuglin event, I thought the "next" one is for points, not the one that just passed.

iusedtoberich said:
Ok maybe I'm wrong but wasn't the 9 ball portion of the DCC a points event as of a few years ago? They changed it from race to 7 to race to 9 for this reason.

As far as I know, you are correct. Maybe they have to confirm it every year?

Silver Member
Thier is a criteria they have to meet so untill they have the full paid entry list they don't know if they meet the criteria ,, they also have to pay for that it's not free , it's on the WPA web site

leto1776 said:
I suspect it has something to do with keeping certain players from earning the points, while allowing American players to start earning some. 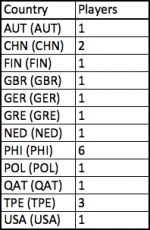 itsfroze said:
Thanks for the number, I'll save it so when I see the BCA do
something good for Pro Players I can call and congratulate them.
Thanks
Click to expand...

I think the pro players should do something for themselves.
Forming a legit professional association to raise standards, standardize rules, and thwart the Barry Behrmans of the world would be an excellent start. The BCA and Simonis have both offered to help with this and guess what happened?

I had Justin ask Shane about the formation of an association on a TAR production and his answer was : we don't need one.

Earl says pool is dead and nothing comes out of derby city but thieves and the flu.

Rodney complains about having to adhere to the same deadlines as everyone else.

Hear about Scott Frost insulting Oscar and Deseret over a tour turf war?

Players bugging and begging tournament promoters to cover their expenses just to show up and Grace us with their presence...?

Players refusing to show up for player meetings and opening ceremonies opting to stay in bed instead?

Players showing up in shorts and flip flops?

Yeah I don't think the BCA is the biggest problem the pros have.

As a matter of fact , the BCA might be smart to avoid the bullshit that many of these players pull on a regular basis. Herding cats comes to mind. Teaching a pig to march comes to mind.

Silver Member
It is tardy slow dissemination of information and communication by BCA
Points will help some to get top 24 automatically qualification seats for next months Manny's W10B
http://www.wpa-pool.com/web/rankings
Right now players nearby like Jason Klatt #24 , John Morra #31 would need points to stay top 24
Players outside US not going to make it with such late announcement
I

What time is it?

Silver Member
I am your teacher


watchez said:
That would sorta make sense IF they did the sanctioning when the tourney was announced and they started to take entries. But the field is now full so now it only benefits the pockets of the WPA.
Click to expand...

Teaching a pig to march comes to mind.


That's perfect for the BCA, thanks.

I know how you feel about the BCA and I really do understand why, but here's the thing, the board is made up of industry reps and manufacturers, and they are the ones with the money to make things happen, not the BCA itself. They are the ones who waste time looking out for themselves and splitting hairs. They are the ones who can't see past the ends of their noses. The BCA can and would do more if their funding partners would collectively pull their heads out. So again, I can totally understand your concerns but at the same time, the "blame" can be narrowed down to individual persons more so than the body as a whole. If " we" want to see them change their modus operandi, we should be addressing the root of the problem, which is the penny pinching politically motivated nitwits. In other words, the car is not at fault, it's the driver. And as small as the industry is, its not like we have hundreds of people lining up to take their places.
I