Gold Member
Silver Member
Here are some aggregate break statistics from the 2021 9-Ball Shootout event played February 19-21 at Rack and Grill II in Augusta, GA with pay-per-view streaming by PoolActionTV.

This was a 48-player, double-elimination event. Races were to 15 on the winners' side and 11 on the losers' side. Fedor Gorst won the event, beating Jesus Atencio in the hill/hill second set of the Finals.

Conditions -- The conditions for the streamed matches included:

- Brunswick Gold Crown IV 9-foot table with generous pockets and well-worn Simonis cloth;​
- Accu-Rack racking template;​
- rack your own with the 9-ball on the foot spot and the 2-ball in the back;​
- no pattern racking allowed (a rule constantly violated by a few players);​
- winner breaks from anywhere behind the head string;​
- the break is illegal (and non-breaker has an option to shoot) unless at least 3 balls fully cross the head string or are pocketed;​
- jump cues allowed;​
- cue-ball fouls only;​
- no 3-foul rule;​
- no shot clock; and​
- all slop counts except spot any 9-ball made on the break in a foot pocket.​
The 14 streamed matches (15 sets, 316 games) I watched were as follows, shown in the order in which they were played. The stats are for 307 games instead of 316 as they exclude 9 games I missed on Sunday when the streaming started earlier than what I read was the starting time.

Legal, made at least one ball, and no foul:

Gold Member
Silver Member
Miscellany from the data for the 2021 9-Ball Shootout at Rack and Grill II
[This relates only to the 15 streamed sets I watched, not to all matches in the event.]

• The average number of balls made on all breaks was 1.6. On successful breaks (legal, made at least one ball, and did not foul), the average was 1.8.

• The match that was shortest in elapsed time, at 61 minutes, was Roberts d. Meyer 15-2. This match tied with the Stalev d. Delawder 11-9 match for lowest average minutes per game, at 3.6.

• About 24% of the games involved one or more safeties.

This Jesus Atencio kid can flat out play guys.

Be on look out for him to win some big events in the near future.

He had Fedor beat, he was on the hill in the 2nd set of the finals and rattled a ball that hung in the jaws that cost him the match at the end. 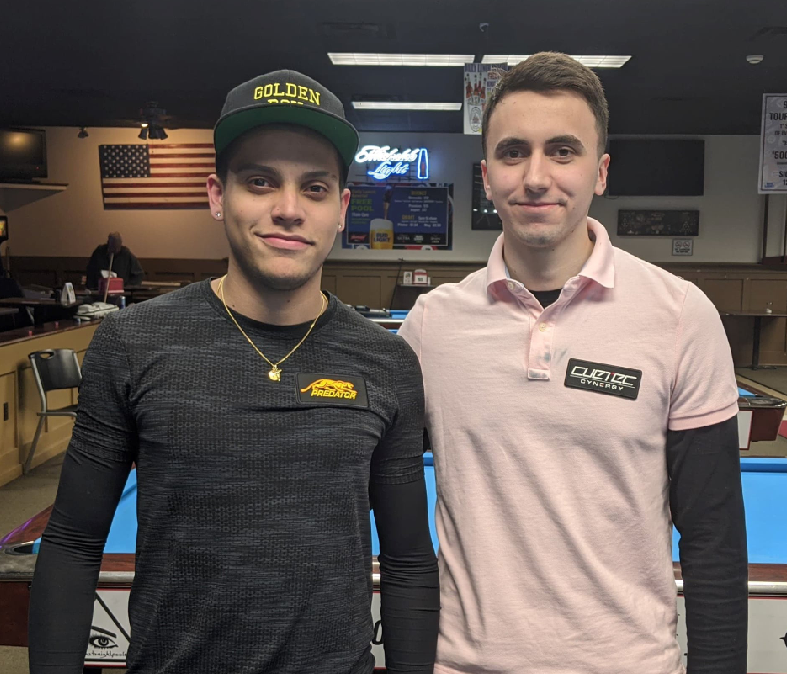 Silver Member
seems to show that on tables with bigger pockets and fast the best breaker will end up winner each set.

if the players are of run out caliber it makes more sense to not even shoot just play the break. thats the new 9 ball.
A

Be on look out for him to win some big events in the near future.

He had Fedor beat, he was on the hill in the 2nd set of the finals and rattled a ball that hung in the jaws that cost him the match at the end.
Click to expand...

Yes, indeed, Terry; Atencio's skills are way up there. I just looked up his FargoRate, and it is at 750 right now. I don't know whether that includes the results of this event. But I would expect him to break into the top 100 (now 772+) in the near future. And I think he could do well against most players on that list.

From what was said on the stream, Atencio is 21 now. So that guy in your picture in the pink shirt is even younger than Atencio. Wasn't there some other guy who used to wear a pink shirt quite a bit?

I'll take 2 the and break

Silver Member
Thank you for doing this, AtLarge.
A

Gold Member
Silver Member
Gorst, Atencio, and DeLuna finished 1, 2, 3 in the event. Let's look at how they did on a few measures compared with the other 9 players who appeared in the streamed matches I watched. [The top 3 finishers accounted for 16 of the 30 player appearances in these 15 sets.]

Successful breaks (legal, made at least one ball, and did not foul):