Gold Member
Silver Member
This entry in the 1925 patent digest basically confirms what we already know... 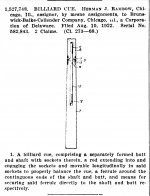 Chopdoc said:
Just a thought, but what about the patent lawyer?

If the firm still exists, unlikely I know, there might be a file.

But even if the firm does not exist, the descendants may have the old law office files.

You never know. There could be notes.

Then, was the patent ever challenged or defended? Where would such a thing be filed? What court? Maybe such a record is not online and is warehoused somewhere with a million other old court filings.

If there is a record of such a thing with the patent office, maybe it is not online? Maybe contact them for such a record if it exists?

Since Brunswick did produce the cue, there is a chance Rambow attempted to defend his patent or perhaps even Brunswick challenged it?

His patent attorney was Fred Gerlach

Fred Gerlach, 87, a Chicago patent attorney for 50 years, died last night in Passavant hospital. He lived at 2150 Lincoln Park West, and maintained an office at 105 W. Adams st. Back in the 1890s Mr. Gerlach was president of the American Wheelmen, an organization of bicyclists. Surviving are two sons, Norman H., and Gelendon T. Gerlach; a daughter, Mrs. Mildred Jaklon, and four grandchildren." Source: Chicago Tribune, May 13, 1958

"Memorial services for Norman H. Gerlach, 75, will be at 6 p.m. Friday in Our Lady of Mt. Carmel Catholic Church, 690 W. Belmont Av. Mr. Gerlach died Monday in Rush-Presbyterian-St. Luke's Medical Center. A native Chicagoan and world traveler, Mr. Gerlach was a graduate of Kent College of Law. He entered his father's law firm, and practiced law in Chicago for 53 years. He was a member of the Patent Law Association. He was the youngest member ever elected to the Adventurers Club. He was a member of the Explorers' Club of New York and the Saddle and Cycle Club in Chicago. He is survived by his wife, Joanna; a daughter, Mrs. William McCormick Blair Jr., of Washington, D.C., and five grandchildren." on 27 February 1980


I can try to find living relatives but it wont be easy.


Rambow's family is unsure if he had a will, so I will be visiting the court clerk office soon to pull his probate file and see if there is any info in there.

Silver Member
I just saw this:

Chopdoc said:
I just saw this:

I am intrigued by the pin in this cue. I don't think I have ever seen the pin of a hub cue. I am wondering if had a lathe center that would utilize the odd tapered point?