Decision to Get Custom Made "House Cues" for Our Gameroom

Gold Member
Silver Member
This is my story about deciding between a basic cue package with the table I ordered or getting some production cues that were considered “better” and finally deciding to just get some custom made. I enjoyed the journey and especially the outcome. I can’t recommend Scott Gilmore highly enough.

When COVID hit in 2020, I was getting close to retiring (or semi-retiring), so I decided a pool table was in order. I spent a lot of time on AZB reading people’s experiences, and finally decided to order from Heath Manning of Manning Cues (excellent experience and service). I ordered a 9’ Diamond Paragon, matching light, dual ball polisher, cue racks, etc. Heath had a basic cue package that came with the table, or you could just get a credit for that, which is what I decided to do. The Diamond factory was closed until May 4, 2020, and Heath put in the order that morning.

While I’m reading AZB about production cues, I get my 2 Richard Black cues out of storage. It had been 25 years since I played competitively, and those and a couple others were in storage. After looking them over, it was obvious they needed a bit of refinishing and sprucing up. I looked on Richard’s website and found a letter saying Scott Gilmore was authorized for repairs on any of Richard’s cues. So, I looked him up.

He was just moving to a much larger shop and had a backlog of work for Richard. (Discovered he’d worked with Richard for the past 10 years building cues.) But, the refinish on my Bushka would not be difficult, so we agreed on a price. I picked it up, and it was once again perfect.

I saw a couple cues over by the pool table in Scott’s shop and asked about them. He said those two were the first cues he ever made, and his wife would not let him throw them away. I asked if I could hit a few balls. Dang. I had my Bushka out that Richard Black had made in 1989, and then hit some with Scott’s two cues. The hit and feel were remarkably very similar among the three cues.

I left the Custom Led Zeppelin tribute cue Richard had also made for me in 1989 for a refinish. That would take longer to restore with all the ivory and my desire to attempt to save the leather wrap that Richard’s wife, Ardis, had originally installed on the cue.

Heck, Wonder if I Can Cut a Deal with Scott Gilmore for a few Custom Made Cues for the Home Room

I kept thinking about how well Scott’s cues hit. I had an idea of the price range of better production cues, so I sort of figured out a budget and decided to discuss with Scott when I went to pick up the Led Zep tribute cue.

I asked Scott about the possibility of making 4 cues for me to use as House Cues. I told him my budget and that I was looking for basic cues but really liked the hit of his cues. I’d prefer to get them from him rather that just order some production cues.

Scott asked what I’d want for each cue to determine if the budget was reasonable. He also said it’d be a while before he could even start, due to still moving and setting up the shop as well as catching up on the already accepted repairs on some of Richard Black’s cues. So, I gave the following vague description:

That’s it. I said, “Just make something you think looks good.” We agreed that the price was fair, and I said if we go over a little, I’d square up at the end.

Home Run on the House Cues

I picked them up last Saturday. Scott knocked it out of the park from my perspective! I’m posting pictures of the 4 cues in individual posts following this one, with my “initial impression of a name” for each of the cues. I’ll enjoy playing with them as much as my friends and family will, I’m sure.

But wait! There are 5, not 4, cues! My wife, Julie, went with me on all the visits to the shop. Scott is such a great guy and my wife was from the general area, so they related well from the start. As a surprise, Scott thought she should have her own cue. So, he made her one, an inch shorter with a smaller diameter butt (Julie is 5’3”). He thought it would fit her better and it came out to be 18.25 oz. It’s the last of the 5 pictures.

I think I’ve made it clear that I like the man and his work. If you’re in the market, it’s definitely worth a phone call to Scott to discuss your wants/needs. He’s got the shop fully running now with a brand-new dust collection system, and I believe his turn-around time is getting less and less every month. Here is his card if you’re interested, followed by pictures of the cues. 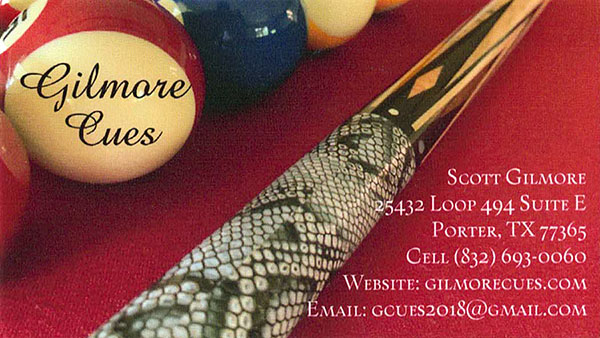 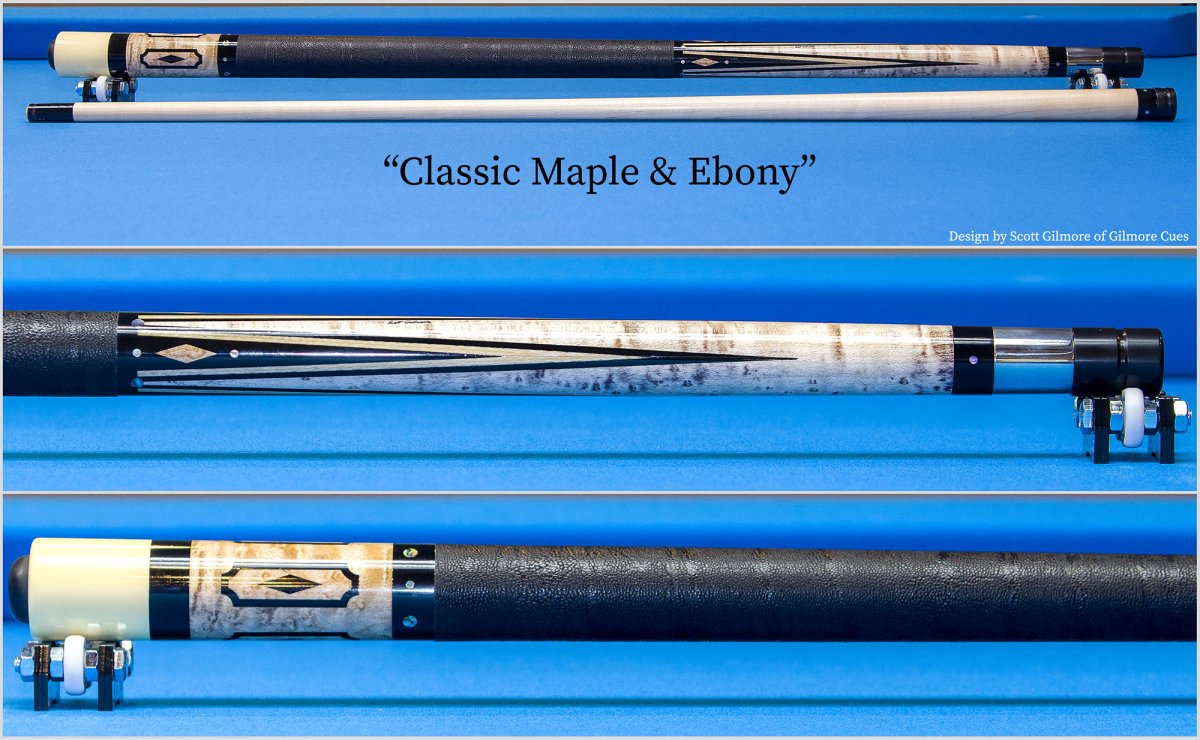 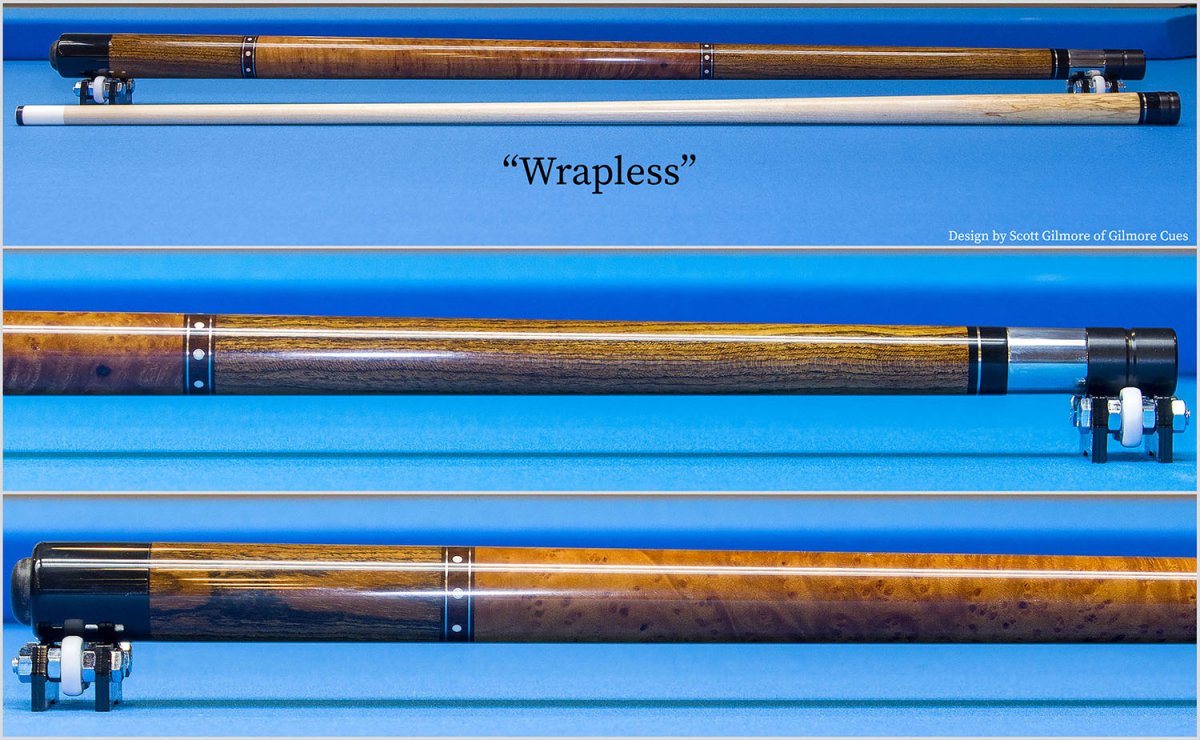 Gold Member
Silver Member
Cue #3: I call it Texas because that’s what it reminds me of. Six-point with American Burl Maple forearm and butt. The red veneers and Ostrich embossed leather help with the feel of Texas. 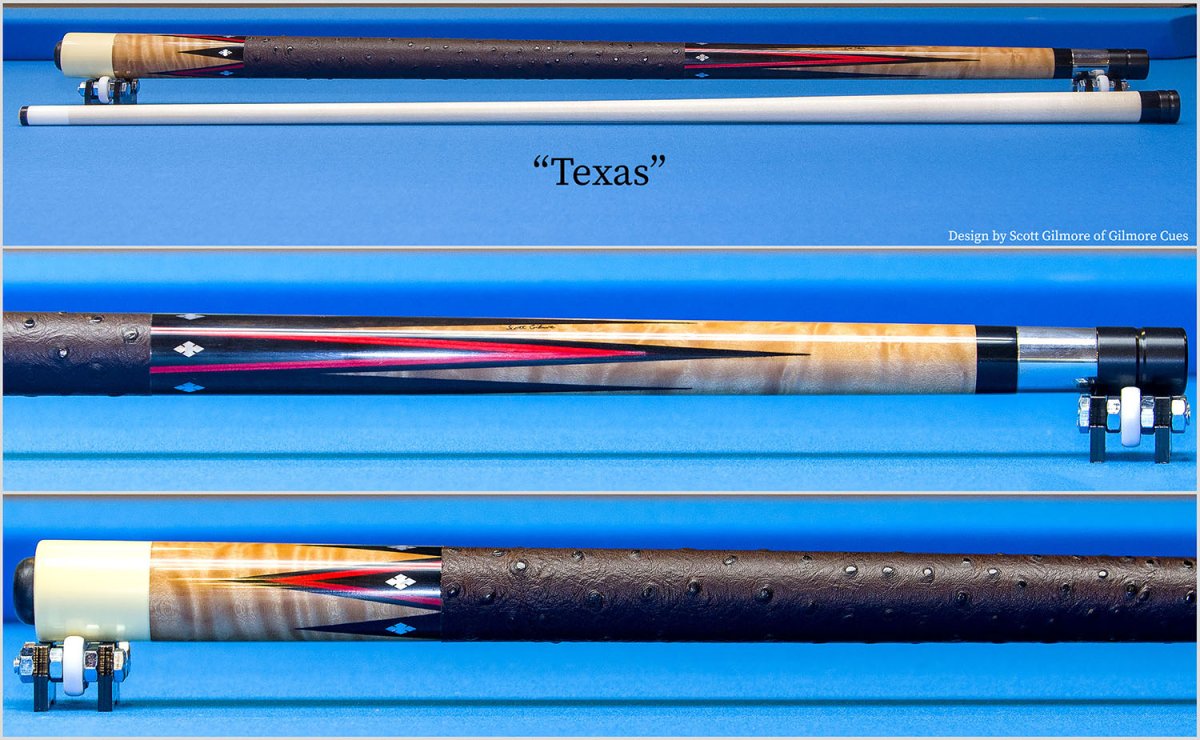 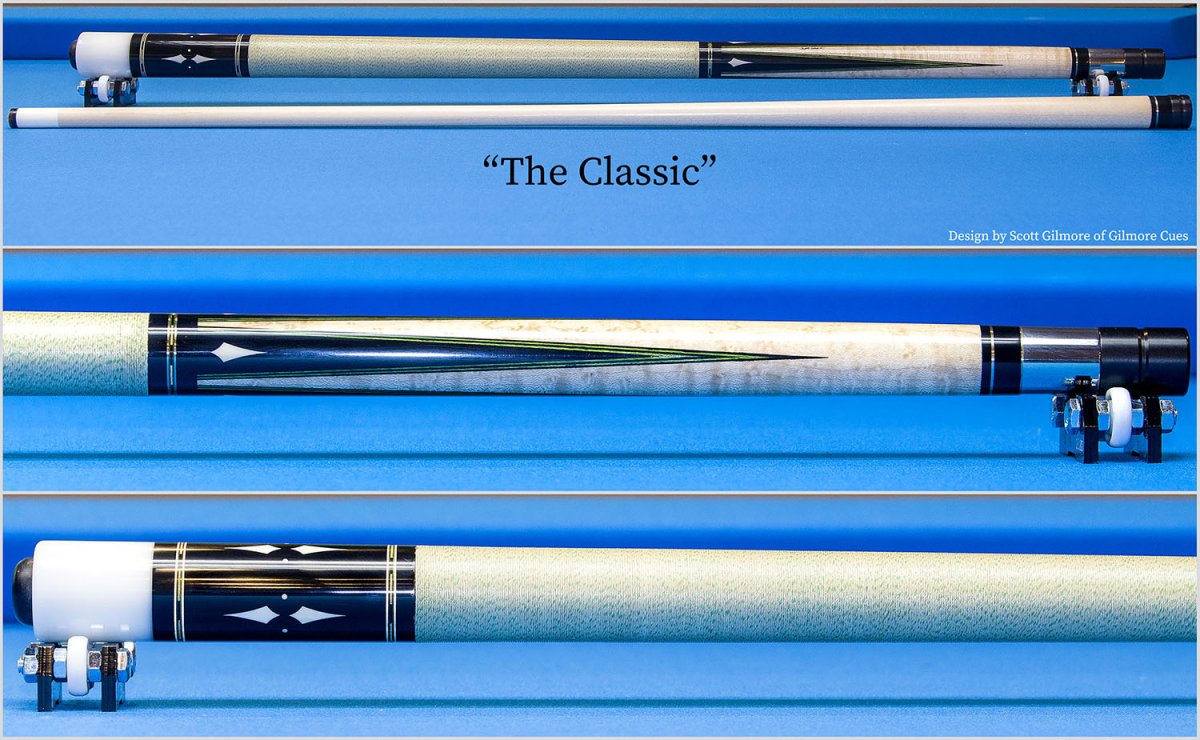 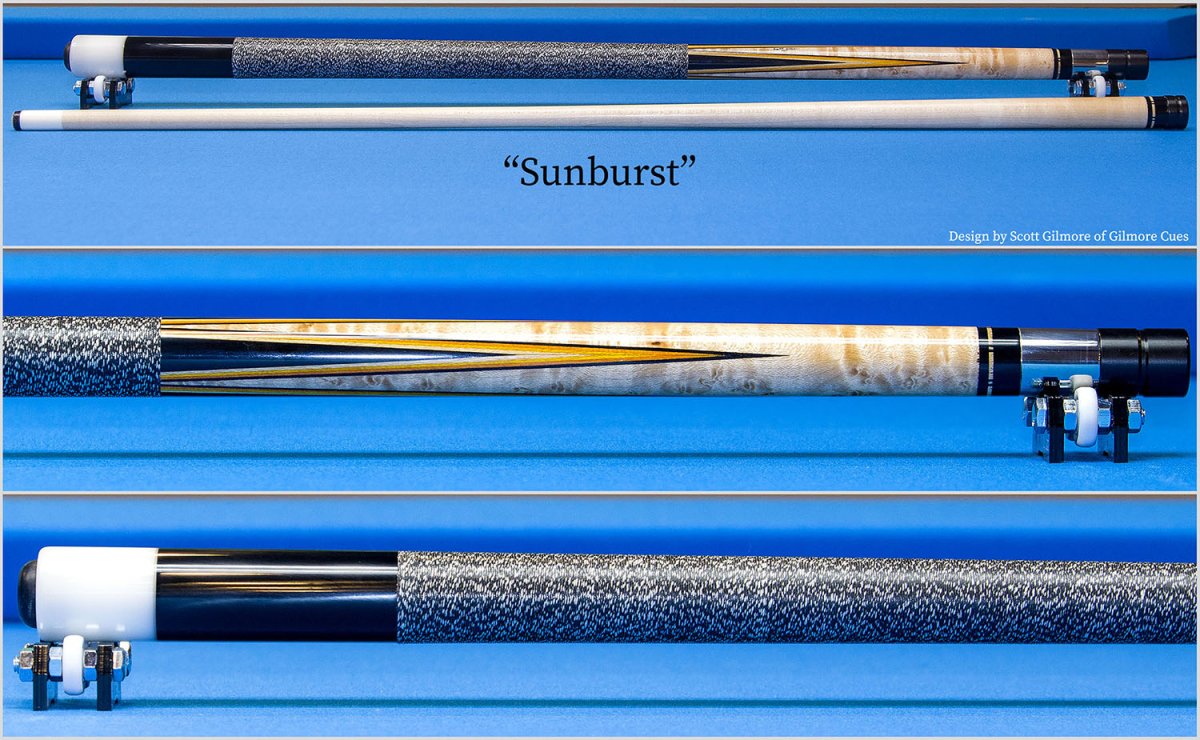 Gold Member
Silver Member
when can i come over to play?
beautiful cues
i like classic and texas best
you really know how to treat your guests....

bbb said:
when can i come over to play?
beautiful cues
i like classic and texas best
you really know how to treat your guests....
Click to expand...

If those are house cues I guess the Customs really rate

bbb said:
when can i come over to play?
beautiful cues
i like classic and texas best
you really know how to treat your guests....
Click to expand...

'Course, I'm still playing like a guy who took 25 years off and gained weight...

'Course, I'm still playing like a guy who took 25 years off and gained weight...

GoldCrown said:
How far are you from 33473.....
25 years off and gained..... My stomach was going down....... going down to my knees but I'm ok now. Interesting.. I have a set of Cents from 1998 on the table and new unused box of Aramith T. also. However my house cues are new skid row 1 piece'rs. Nobody can touch my customs without a small deposit
Click to expand...

Dang! I'm in Houston, a block or so outside the West inner loop. All the pool halls are way out in the suburbs, so I never get out to them. Would be nice to have some players in my area to help me get focused and back in stroke!

I'll be in Florida over Christmas, albeit a good 200 miles or so from you...

Silver Member
Now that's hospitality! Those are some gorgeous cues.

LC3 said:
Now that's hospitality! Those are some gorgeous cues.
Click to expand...