Silver Member
Call it what it was. One of the biggest come aparts you'll ever see. I feel your pain Larry.
G

Gold Member
Silver Member
You can never bet against Busti! He knows how to win!
A

jay helfert said:
You can never bet against Busti! He knows how to win!
Click to expand...

Bustamante was down 0-2 in games and 0-4 in balls in a race to 3. Nevel needed 1 ball for the title and Busty had nothing. Nevel took 3 shots at the win but scratched on the third try. And the rest, as they say, is history.

Silver Member
I was pulling for Larry, I'm in the Chicago area and I have seen him in local action, I have a lot of respect for him and his game. I also like Buste, he's an AAA player and a class act. 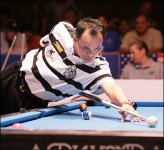 Silver Member
That comeback was absolutely epic. One mistake by LN and it just snowballed from there. Learned a big lesson this match from Busty. Never give up!

Gold Member
Silver Member
Anybody have the payouts for this division? Probably 10K for first.

sjm said:
Rack four is a strange one. Bustamante leads the rack 2-0, but the other seven balls are all on the spot!
Click to expand...

To double up the strange factor, at the same time, Nevel had pocketed five balls on the break against Shannon, and when his inning was over, all balls were spot up. So when we looked up at the big screen to check out the Kiamco/Busty match on the main table, the layout looked almost the same. Very strange to look back and forth to see the same lineup type of layout in the two semi-final matches at the same time.

MOJOE said:
That comeback was absolutely epic. One mistake by LN and it just snowballed from there. Learned a big lesson this match from Busty. Never give up!
Click to expand...

Snowballed is right. Nevel had I think four weird mistakes after scratching on th case ball. Oddly, Busty kept making balls on safeties giving Larry free straighbacks after spotting. It wasnt stellar play by Busty, but one of the most ground out bank finals ever.

Gold Member
Silver Member
I've been watching it for years, have commented on it here previously with video evidence, and still find it hard to believe.

I was fortunate to hit some balls with Busty in NJ a few years ago and aside from his magnificent locomotive stroke, I was watching as the highest knuckle on his bridge hand was getting painted blue by the chalk. I asked him about it and he just laughed about it and said "it's what I do."

On almost every shot he takes the tip disappears *way up* in his hand then as his stroke comes forward the tip bangs that knuckle and somehow makes its way to whitey in control and at world class speed. How in the hell is this possible? :thumbup:

It is especially evident when he is bridging on top of a rail and you can see the tip come back so far that it it actually no longer in contact with any part of his hand, the tip is only touching the rail as it starts to come back forward, into his hand then bangs the knuckle then arrives at the cue ball, well enough to win DCC Banks Division. :grin-square:

Gold Member
Silver Member
An encore presentation of the last approx 50 min of the banks final is on now.

Silver Member
Bustamante is, by far, my favorite to watch. Nothing boring about his game.

AtLarge said:
Bustamante was down 0-2 in games and 0-4 in balls in a race to 3. Nevel needed 1 ball for the title and Busty had nothing. Nevel took 3 shots at the win but scratched on the third try. And the rest, as they say, is history.
Click to expand...

Ouch. I hate those sets where everything you do is worse than your previous effort.