Neil said:
He died on Friday, day one. He was dead through Saturday, day two. He arose on Sunday, day three. "On the third day, He will rise again".
Click to expand...

This would be an interesting discussion, but in the NPR forum.
Happy Resurrection Sunday!
Let's get back to funny! 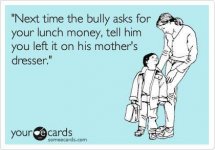 I'll have to post the picture once we have it downloaded from the CD of me holding a monkey here last week in Punta Cana...kind of a funny pic.

did you call that? It says I do not have permission to access this page...

Silver Member
Your brain, the a-hole

Silver Member
Translation: A hairy kitten can hide another one

cueguy said:
It says I do not have permission to access this page...

maybe you're banned & you don't know it yet?
just kidding - the thread got jerked. it was a picture that KK9 posted, of a lemur doing a gay dance of celebration cause the OP & CJ kissed & made up.

The kids filed into class Monday morning. They were very excited. Their weekend assignment was to sell something, then give a talk on productive salesmanship.
Little Sally led off: “I sold girl scout cookies and I made $30? she said proudly, “My sales approach was to appeal to the customer’s civil spirit and I credit that approach for my obvious success.”
“Very good” said the teacher.
Little Jenny was next: “I sold magazines” she said, “I made $45 and I explained to everyone that magazines would keep them up on current events.”
“Very good, Jenny,” said the teacher.
Eventually, it was Little Johnny’s turn. The teacher held her
breath….
Little Johnny walked to the front of the classroom and dumped a box full of cash on the teacher’s desk. “$2,467? he said.
“$2,467!” cried the teacher, “What in the world were you selling?”
“Toothbrushes” said Little Johnny.
“Toothbrushes?” echoed the teacher, “How could you possibly sell enough tooth brushes to make that much money?”
“I found the busiest corner in town” said Little Johnny, “I set up a Chip and Dip stand, and I gave everybody who walked by a free sample. They all said the same thing, ‘Hey, this tastes like dog crap!’ Then I would say, ‘It is dog crap! Wanna buy a toothbrush?’
I used the President Obama method of giving you something sh!tty, dressing it up so it looks good, telling you it’s free, and then making you pay to get the bad taste out of your mouth.”

Little Johnny got five stars for his efforts, bless his heart…

Here is his full length movie. Language is a just a tad bad. Who would have thunk that eh.

I have watched it before. Actually quite good. The entire movie is pretty much one bad Little Johnny joke after another.

With Kevin"Bloody" Wilson having his hands in on it, what else could you expect.

Enjoy, for at least as much as you can take in one sitting.

Lol. is that an air cleaner at the tip? 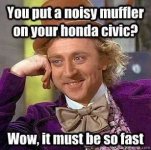