How do I find the spine on my pool cue shaft?

garczar said:
I think they finally gave up on the BD. To me it played ok just felt dead, lifeless. The MeucciPro wood shaft is a whole different deal. One fine playing shaft.
Click to expand...

I had a Meucci Pro wood shaft that Bob made for CJ Wiley.

After playing with for a while, it seemed a bit “mushy” to me on power shots.

Silver Member
The black dot shaft was plywood, flat laminated. I felt the dot did make some sense on that. On other types of maple laminates or natural maple shafts...well maybe not so much. From snooker I'm used to orienting my shaft a certain way, because the shaft has chevrons on it (ash). These work like natural arrows and are both pleasing to the eye and helpful for aiming. Also orienting the cue the right way is part of the pre shot routine. As far as spine effects, I doubt that is a big part of the perceived improvements from doing this.

It was like that when I had the black dot shaft, just a routine, though for the black dot I couldn't tell much difference, even though I probably should have. It was just a thing to do before I shot the shot.

The black dot meucci shot was not a very good product. They had a problem with warping, delaminating and other issues. Also they didn't play all that well IMO. For instance their advertised deflection was not close to the real life performance, where it was clearly outmatched by Predator 314. The black dot would vibrate in weird ways on power shots and generally not feel very solid. They quickly fell out of fashion where I live.

I have found the more "whippy" (that's what I call it also) a shaft is I can get more english out of it. Not sure what the science says about it but, if I pick up any of my cues with 13mm shafts I can't draw as well, pick up one of my 12.7's and I can draw much better, pick up my Huebler that is a bit more narrow the first few inches down from the ferrule and I can draw further than the others. I will say I am less consistent with that Huebler than the 12.7's unless I used it exclusively. It could be I'm just more used to it but I've been playing for a few decades now and I noticed that back in the 90's, it's why I couldn't get used to a new Pechauer I had purchased in the mid 90's.

The Predator can always find the spine

Quesports said:
In custom fishing rods it is known as the spline and very important to have it on the top or bottom of the blank. According to how the rod will be used while fishing and potentially fighting a fish..
There is a device called a spline finder which works very well it can also be done by hand on medium to lightweight rods..

I would agree there is likely one with shafts as well, especially carbon fiber.. How much it affects a pool cue is another subject since it loads differently than a fishing rod.
Click to expand...

Sorry, you're wrong on this one. Spine is the correct nomenclature.
Q

Jack Justis said:
Sorry, you're wrong on this one. Spine is the correct nomenclature.
Click to expand...

Respectfully I disagree. The term spline has been used by many folks for years.

For instance, page 130 of Wayne Cattanach Handcrafting Bamboo Fly Rods has several paragraphs under the heading, Finding The Spline.

You can also refer to Dale Clemens book Fiberglass Rod Making page 91 and page 92. There is a picture of Dale in a short paragraph titled Aligning The Blank. Dale is shown rolling a blank to locate the high side to locate the spline.

So I believe the usage of the word spline is accurate...

Silver Member
Spine tester. Should work fine with a shaft

Patrick Johnson said:
A shaft's grain is like the edges of a sheet of plywood - it bends easier across the grain than with it. The spine is where the layers of grain are mostly perpendicular to the shaft's surface - where the grain lines are closest together and straightest. For instance, with the shaft turned so the spine is straight up it will bend (very slightly) more horizontally than vertically - but not enough different to be noticeable.

With what Patrick said; keep in mind that with side spin you'll orient the cue one way, and with top or bottom, the other way. lol

Johnny Rosato said:
With what Patrick said; keep in mind that with side spin you'll orient the cue one way, and with top or bottom, the other way. lol
Click to expand...

A friend of mine bought a red-dot when they came out and we always viewed it as a way to maintain consistency. Yes, rotating it one way or another would/could change the hit, but if you always kept that red dot up then regardless of what you did, the hit was always the same for the same english being used.

It may not be the same from left to right, but it's the same if hitting the CB in the same spot - and that's all that really matters - consistency.

EDIT: I use the dings in one my old shafts to keep it in the same orientation. When I use a crooked bar cue I always orientate it so the curve puts the tip down and then I look for a spot on the forearm/shaft to keep an eye on, if none, I make one Has it helped, doubtful, I'm not making a living off banging balls

It's not the arrow, it's the Indian.

Quesports said:
Respectfully I disagree. The term spline has been used by many folks for years.

For instance, page 130 of Wayne Cattanach Handcrafting Bamboo Fly Rods has several paragraphs under the heading, Finding The Spline.

You can also refer to Dale Clemens book Fiberglass Rod Making page 91 and page 92. There is a picture of Dale in a short paragraph titled Aligning The Blank. Dale is shown rolling a blank to locate the high side to locate the spline.

So I believe the usage of the word spline is accurate...
Click to expand...

Yes, it was used incorrectly by many folks, including Dale Clemens, until it was discussed at length at one of the National Seminars hosted by Dale Clemens. Dale realized that "SPLINE" was the incorrect terminology and he corrected it to "spine" in his latest book, Advanced Custom Rod Building. 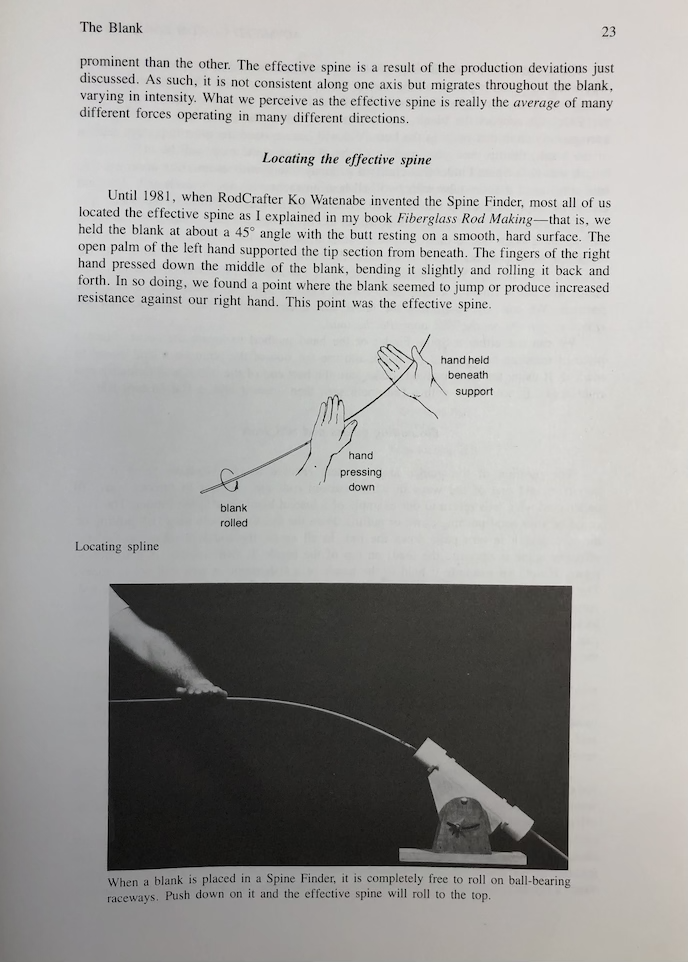 Silver Member
Thanks for the clarification.

Silver Member
Is it the part of the wood where there seems to be a "seam" of scales that run the length of the shaft ?
Last edited: Dec 15, 2021
L

Gold Member
Silver Member
I think the Meucci dots were/are used to mark the place where the crookedness of the particular shaft is up and down not sideways to help minimize the effect of the crookedness on shots.