Gold Member
Silver Member
Jay...Those are amazing accomplishments! Sounds like it was a great time had by all! Nick is a member of another exclusive club too...ACUI Collegiate back-to-back national champions! I'm not sure how many have done that, in the last 60+ years...but not many! Max Eberle, Tony Piazza, and Lars Vardeman are others. I just spoke with George Michaels' brother, and learned that George has been playing a lot at Crown Billiards. Maybe he'll get to play Nick or Johnny!


jay helfert said:
Nick competed! And very successfully I might add. He was a four time POY and won eight world championships in five different disciplines (9-Ball, One Pocket, Eight Ball, Banks and 14.1). I don't think ANYONE else has done that. Nick is also the only back to back U.S. Open champion.
Click to expand...

jay helfert said:
I was there last night for the "show" at Butera's Billiards in Moorpark, CA. Very cool new room with four 9' Diamonds and six 7' Diamonds. They are big on league play every night.

First Nick played young Brendan Crockett (he's all of 14!) a Race To Seven 9-Ball. If you think this was a 'just for show' kind of match you would be very wrong. This young kid can play! He has a great future in pool if he sticks with it. Nick quickly saw what was going on, that this kid wanted to beat him, and it evolved into a very good match. Nick was looking for "lock 'em up" safeties and played some very tight (and serious) pool. He managed to eke out a 7-5 victory over a tough opponent.

Next up was Johnny's match with owner Sal Butera. In case you may not know, Sal (who is HOF'er Lou Butera's son) used to play on the pro tour in the 1990's. He only came back to playing pool in the last year and already has three top five finishes in regional tourneys with strong fields. This was a much longer match, Race To Nine, Ten Ball. You could really see what a difference one extra ball makes. I sat next to Nick during this match and he commented to me how much better a game Ten Ball is than 9-Ball. He said that in Ten Ball "You have to make many more decisions."

It was neck and neck until the score reached 4-3 Sal. Johnny just took over at this point, basically shutting Sal down and taking complete control of the match. He put on a display worthy of a THIRTEEN TIME PLAYER OF THE YEAR, running out every time he came to the table and winning the last six games in a row. Did I say this was on a very tough (and tight) Diamond Pro-Am. While watching this onslaught of brilliant pool, Nick looked at me and said, "You are looking at the last great American player. There has not been another great player to come from America since Johnny. Before him was Earl and that's about it for the last twenty five years."

Nick went on to comment, "In my era we had several GREAT american players. I played against Sigel, Mizerak, Buddy, Hopkins and Rempe. All great pool players." (He forgot to mention himself but I will) "As far as I'm concerned I played in the golden era for pool in America." I swear he used those exact words. Nick went on to say that he thought Parica may have been the best filipino player he ever played, not Efren. In 1990 Nick was invited to play Efren a Challenge Match in Manila, a Race To 60. Nick won easily 60-42 on Efren's home turf!

I just wanted to share these interesting comments from a man who was there and competed against all the best players of the last forty years. Unlike me, who was more of an observer than a player, Nick competed! And very successfully I might add. He was a four time POY and won eight world championships in five different disciplines (9-Ball, One Pocket, Eight Ball, Banks and 14.1). I don't think ANYONE else has done that. Nick is also the only back to back U.S. Open champion.

I asked Nick what he thought were the greatest accomplishments he had witnessed in his years in pool. He said the absolute greatest accomplishment is Johnny's thirteen POY awards in an eighteen year period. Especially so because the game was predominately 9-Ball, which has a high degree of luck to it. The second greatest is Earl's five U.S. Open titles. He said no one would ever match that.

Anyway, the place was packed and we had a great time. If you're ever out that way, be sure to visit Butera's in Moorpark, CA. Thanks to AZ'er Mark Cantrell for putting this exhibition tour together.
Click to expand...

Jay, it was a great night for sure. This was not the usual Legends and Champions exhibition as we didn't do our usual show but did what Sal & Butereas Billiards wanted us to do. Everyone was glued to the matches and as usual I stood in the background and at 6ft 4 I still had a problem seeing around the great crowd. Buteras did a great job getting the word out for this and we appreciate there support.

Jay was a great MC for the night and although he took my job for the evening he did way better than I could have done and we really appreciate him just being there. I made a trade with him for a Legends tour shirt for one of his books and read it as long as I could keep my eyes open. A GREAT BOOK. Also JA got one who has said he just does not read too much was up way longer than he should have been reading it into the early hours.

Well we did the 6hr drive to The San Francisco Bay today and we have a pool school tomorrow morning and a exhibition the next day at Crown Billiards on San Ramon. I went there tonight to say hi to Kevin and Russ the owners and had a great time. What a nice pool room, very classy. Anyway thanks to Buteras Billiards and all their staff, thanks to all the spectators who came to the show and school and thanks again to Jay Helfert who actually said some very nice things about me while doing his MC ing. I really felt that any compliment coming form JAy is not only heart felt but also an honor from a guy who has seen just about everything in this game.

If anyone has pictures of the Nick and Johnny show from anywhere please post them up!

Scott Lee said:
John...Did George Michaels get to play either Johnny or Nick?

George did not. Paul Juarez played Johnny in a race to 9. Johnny won 9 to 4. Then they did a few scotch doubles matches! That was fun to watch.

I was there sitting table side for the WHOLE thing and I agree with ALL the praise made on this thread already.
Anyone who loves pool and can make it to the San Ramon event absolutely must go.

You will NOT be sorry.

Best Pool I have EVER seen!
BAR NONE!

Silver Member
And a good time was had by all. I just returned from The Ledgends and Champions Pool School at Hardtimes Billiards in Sacramento, Calif. Before i get going on the school i must put out info on Hardtimes. Before my class started there was a privous class of High school students (40 approx.) taking pool as an elective for P.E. Let me tell you i was just thrown back with the program, the kids were unbelievable, knowledgeable about players and some were strong players already. Anyways when Johnny and Nick walked in and gave up free time to spend with the kids answering questions and playing a few racks this was by far one of the greastest gifts a Pro can give to our upcoming champiopns of tomorrow. My hats off to the instructors i didnt get to meet them as the place was jumping with excitment. I think one was named Bart.
Now for my take on the school. AMAZING. Nick shared some aiming systems and kicking systems to us. Also we got into some 14.1 breaks. I could listen to that man talk all day. His voice is clear and easy. He is pretty funny also has some great stories for sure. Johnny worked more with us on alinment and bridge and stroke. Wow was i out of line amazing i ever made a ball.lol. after class we sat around and BSed signed shirts and anything else. Took a few pictures.
and in conclusion, i got say something about Mark. what a work horse, running from the time he got there to time he left. He made it happen, and i'll be looking for a tour next year. Thanks to Mark, Nick and Johhny. Also AZ rocks without this forum i would have never known about it.
S 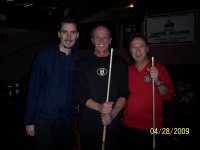 Silver Member
Nice picture, I presume that is you between Johnny and Nick...you fit in there nicely...hehe.

BigRigTom said:
Nice picture, I presume that is you between Johnny and Nick...you fit in there nicely...hehe.
Click to expand...