Gold Member
Silver Member
Well, we know that USA won't get shut out! Come on JJ! I'm pullin' for you buddy!

Nice! Hopefully DAZN and AWS get their ish together - I'd like to be able to watch this.

Silver Member
How much does predator pay to get them to use that abortion of a ball set?
I'm sick of that 4ball-colored 5 ball.
I'd like to set up a GoFundMe to raise the same amount of money to pay them to use a non-tarded ball set.
The cloth is stupid too imo.
Still fun to watch.

Did they get to pick these walk out songs I wonder?

jokrswylde said:
USA enter to "we didn't start the fire"
Euros come out to "jump around"

Did they get to pick these walk out songs I wonder?
Click to expand...

Silver Member
lambs to the slaughter

Silver Member
reinhold misses an easy cut into the side, leaving the table open for europe
B

Reinhold looks like a liability for this team already. Two shots, two misses, after a great jump shot by the steady Styer. Leaves an easy rack for Europe to run and they predictably take care of business, 1-0 Europe.

Silver Member
I am unable to resubscribe to DAZN. Tried a number of times, continue getting errors. Anyone else having trouble?
B

Styer makes the wing ball on the break, leaves a tied up 1 for Reinhold. Plays defense, leaves an opening (3 shots for Reinhold, all poor). Kaci thins the 1 to hide it on the bottom rail, Styer up to shoot. Foul shot on a kicked ball, not even close, ball in hand for Europe. Every single ball at the bottom end of the table, won’t be an easy run for Europe.
K

xianmacx said:
I am unable to resubscribe to DAZN. Tried a number of times, continue getting errors. Anyone else having trouble?
Click to expand...

yes, may be related to Amazon AWS issues?

xianmacx said:
I am unable to resubscribe to DAZN. Tried a number of times, continue getting errors. Anyone else having trouble?
Click to expand...

I had to so it through the Google play store. I think they're sick of us using them for 2 or 3 months. I'm thinking about keeping it this time.
S

I love the slow clothes, it's showing the flaws of some of the player's strokes where they used to roll everything with soft strokes.
B

After a few pots Albin leaves a very makeable shot for Kaci, but he makes contact on the 7 on the way to the corner pocket for a miss. Reinhold up, finally makes a ball but mostly hooks Styer. Styer thins the 6, leaving it on the rail up table for either a safety or long bank. Albin shoots what looks like either a badly attempted bank or an attempt to leave the 6 on the other end rail. Either way, bad shot, and Reinhold has a long shot on the 6. Strangely, he passes on the pot opportunity to play a cross-bank safe and tied up the 6-9 on the end rail. Kaci swings at it, nothing good, leaves Styer a pot on the 6 in the side, with every ball tied up on the side rail.

Styer elects to play safe and does a decent job, forcing Albin into a short kick into a cluster with the 6. He masterfully plays an Efren special kick stop, snookers Reinhold, who has to kick at the end rail. Makes contact but table is open now, still not easy though. Kaci with a terrible shot on the 6, makes the pot but hides the cue behind the 8 on the other end of the table. Nervy play thus far.

Forces Albin into a jump, who makes contact but leave the 7 hanging around the corner pocket. Styer makes it but leaves it very short on a 8 ball cut into the corner (or a bank potentially). Reinhold needs his best shot thus far, and he sinks it! Styer left with a easy 9 and sinks it. Ties it up 1-1.
O

jokrswylde said:
USA enter to "we didn't start the fire"
Click to expand...

...as a Bruce Springsteen fan, this post hurt.
It was "Dancing in the dark"
I
S 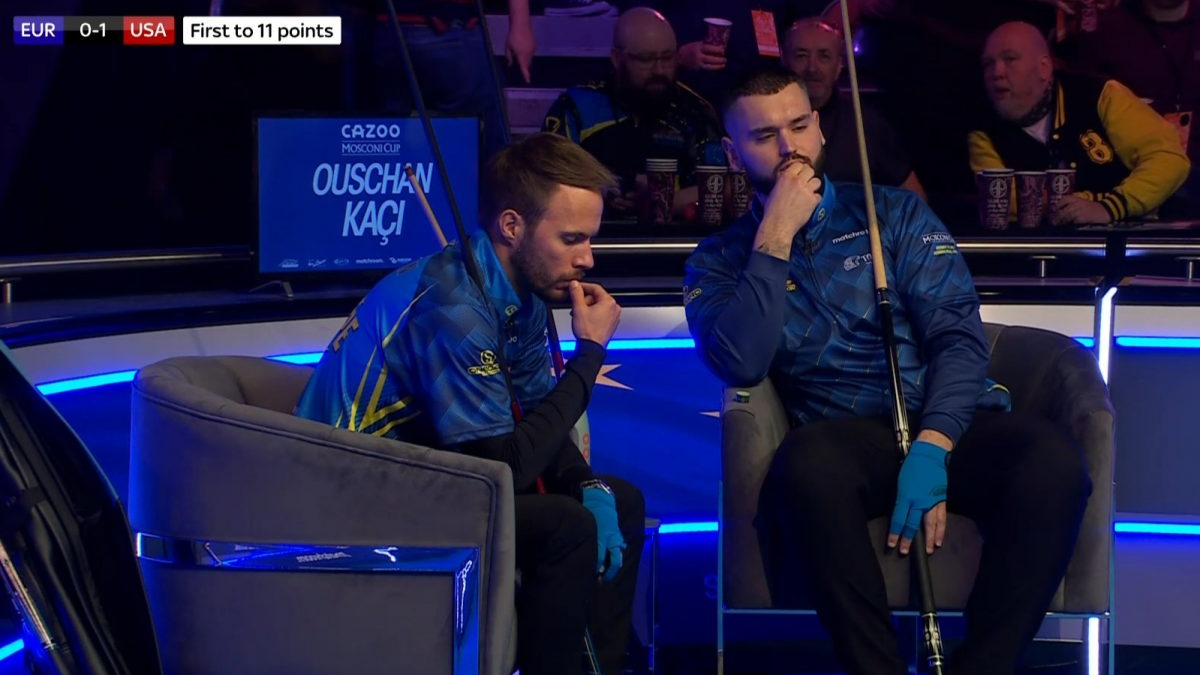