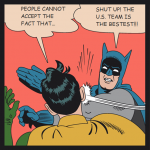 voiceofreason said:
So the USA manages to win it's own internal tournament that only has a few foreign competitors in it and claims a moral victory?

And I would hardly call that dominating anyway. What you mean is ONE player (SVB) has been able to compete at the elite level - but only in this one event:

What about at the elite level in the rest of the world?

I'm far from a SVB "nut-hugger". But looking at this year's US Open field, and claiming it only had a "few foreign competitors"

The word 'ignorance' comes to mind.

And the guy's right. To run an event that pays well, draws fans, and is also attractive to
the pro players (for reasons other than the pay)... you've gotta find a nice balance
between "Fair" and "Fun". They've achieved that.

So they allow slop because it adds a certain spice and randomness to the game,
even if it's a bit "unfair" that someone craps in a ball and gets rewarded after a miss.
Missed balls (much less missed balls that find a pocket) are pretty rare at that level.

But they do alternate breaks because it's TOO unfair if someone runs out the set.
5-packs from top pros are way too common.

A series of short races is mathematically SLIGHTLY less fair (if you think fair means
"the best player is guaranteed to win") but is 10x more entertaining for viewers
than a single plodding, lengthy race to 100.

Everything from the break box size, to the rack position, to the choice of MR or not,
is somewhere in that fair vs. fun spectrum. And Matchroom makes smart decisions
here and has come up with something that balances things nicely.

PS: I didn't notice the cloth or rails but I do like to see someone buck the trend of
tiny pockets. I don't think people are being honest with themselves when they say
"I like seeing top pros miss". Do you figure golf fans get mad like
"WTF that putt was waaay off to the edge of the hole and it fell in anyway!
They gotta get new holes on this course!"

Silver Member
Paul you don't have to patronize me....


Paul Schofield said:
Sorry, I thought it was clear. I do sympathize that some pool players wouldn't understand it.

All I asked was a question and was hoping for a response, to the question.
Click to expand...

Mr. Bond said:
I do not see shrinking tables and larger pockets as desirable for our sport,
Click to expand...

I re-read my post to be sure. My inference was not smaller tables and larger pockets. My reference is to the standards for decades prior to 2000 which were our sport's heydays. That would be regular and standard for me which is 9' tables, 4 3/4 pockets, and less lively rails. I am questioning the impact of the current trends here in the states (making the game harder to play).
Last edited: Dec 17, 2016
You must log in or register to reply here.
Share:
Facebook Twitter Reddit Pinterest Tumblr WhatsApp Email Share Link
Top