smallstonefan said:
Since I just came out of lurking to post on another thread I thought it was time to say hi. I am James and I'm from Papillion, Nebraska.

I'm 51 and though I've had a table for 17 years I really just started playing about three months ago. I had originally bought the table more as a piece of furniture because it fit the room (and I always had a table in the house growing up). Covid made me realize what I was sitting on and I started diving in deep and fast. The strategic aspect of shape is like playing chess, figuring out the english and power of a stroke is like solving a puzzle, and sinking balls is viscerally satisfying; I am LOVING the game.

Just had my table recovered and decided to have them come back and move it. I have a few tough angles that require a short cue. It's a big room so I'm having the table turned 90 degrees and I'll have minimum six feet on each side. My wife said "you're taking over the whole room!" and my son and I pointed out that I'm the only one that uses the room! lol

I'm looking forward to visiting my dad in Florida and playing him since he's played all his life.
Click to expand...

MurrayNevada said:
New old guy here from the Mojave Desert. Have not played in about 50-years and getting back into it with my young grandkids. Already learned a lot here and know I'll learn more.
Click to expand...

29 stumps? Spent a little time there back in the day...

Greetings Everyone from the Middle of Big Sky Country AKA Montana I've gotten back into playing pool after taking about 20 year's off from playing pool to spend time with my kids and help them get through school .
Now I'm a very proud Grandpa and a throat cancer survivor and a avid outdoorsman , I'm active in our local chapter of Walleye's Unlimited and I totally enjoy helping kids learn to catch fish so they can appreciate and enjoy their time outdoors .
But long before that I volunteered at the Billings Boy's and Girl's Club for a short time as a pool instructor then later on at the Hardin Corner Pocket .

I was fortunate to of met many very good pool players and called them my friend's and I learned a great deal from that time in my life as a pool player .
If I were to mention names some may say I'm bragging or that I'm lying ha ha the truth be told in many cases the wilder the story seems the more truth is involved .
Thank you for allowing me to be a part of this website !
Allan AKA Rusty
C

I registered a long time ago, but I haven't been using the website. Trying to figure out how the forums work, etc., etc., etc. On a personal note, I first picked up a cue stick when I was in high school, about 50+ years ago. I guess I could best describe myself as an accomplished amateur. I don't get to play much any more, but I still love the game and enjoy watching cue sports on YouTube videos.

Getting the first post out of the way. I used to play a lot of pool but it has been a while. I recently moved into a new house and just got my game room set up, complete with a table.
L

Guess I should post in the welcome thread. New guy here. Fell in love with pool playing 8-ball at a hotel in La Guaira, Venezuela, and played sporadically whenever I could, which was not very often. I built my house with a pool room and got a table in 2000. I've got a couple of McDermott cues and a Huebler that a friend has left with me for a couple of decades. Something about his ex-wife giving it to him. I like Kamui tips.

I recently bought a carbon fiber shaft from OB. I like to buy local, and their Plano store is 10 minutes from me. Amy was awesome and let me try a couple of different shafts on my own cue. The tip is the 12.3, and it's magnificent to hit. I tried a Revo CF shaft at Billiard Den but it wasn't a fair test. I think it was broken or something based on the sound and feel.

In a major coup last year, I convinced our CEO that we should shut the corporate office and all work from home, so now my office is three steps from the table. I come out at least once an hour to shoot a couple of racks. I get to play every day.

Oh, and I won a pool tournament a couple of years ago. The Richardson Corporate Challenge, which was 83 people who had basically never played before and a couple of guys who at least knew how to shoot a little. But I did win it.

New here from SE Wisconsin. Started playing pool in the late 60's when I was in high school. There was a plethora of pool halls in the Milwaukee area. Worked at one of them for awhile as well. Had a number of tables throughout the years when space permitted and recently acquired a 9ft GCIII black and thoroughly enjoy playing on it. I fully retired about 6 yrs ago.

Paulo De Leon said:
I've been checking this page out for quite sometime and would like to say hello to everyone. I used to play a lot when I was a teen but my work took over my life so I haven't been shooting pool as much as I wanted to.

I'm 32 from PI and just recently bought my first cue (Al Bautista) and looking forward to improve my game. Happy hustlin everyone!
Click to expand...

This is an outstanding site for everything pool related and some things not related to pool.

"shootin' from the hip"

Hello Everybody. New here from Texas. I have been a member for a few years, but took a hiatus from pool for about 7 years. M. Since i have gotten back into the swing of things, i have made an effort to work clearly on my stroke for now. I know everything else will come once i get a handle on that. But enough about me, i like to look at all the different post and see all of the variance of opinions on subjects. Keep up the good work guys.
M

Thanks for the acceptance to the group!! New guy from So Jersey been playing since I was a kid. Played in the APA back in the 90's. Just a casual player. I have a 4x8 Olhausen & go to the local lane's where they have some tables every couple weeks with my brother & nephews for old against the young matches. I like sticks & have a few. This is my jewel of the bunch. Dave K. 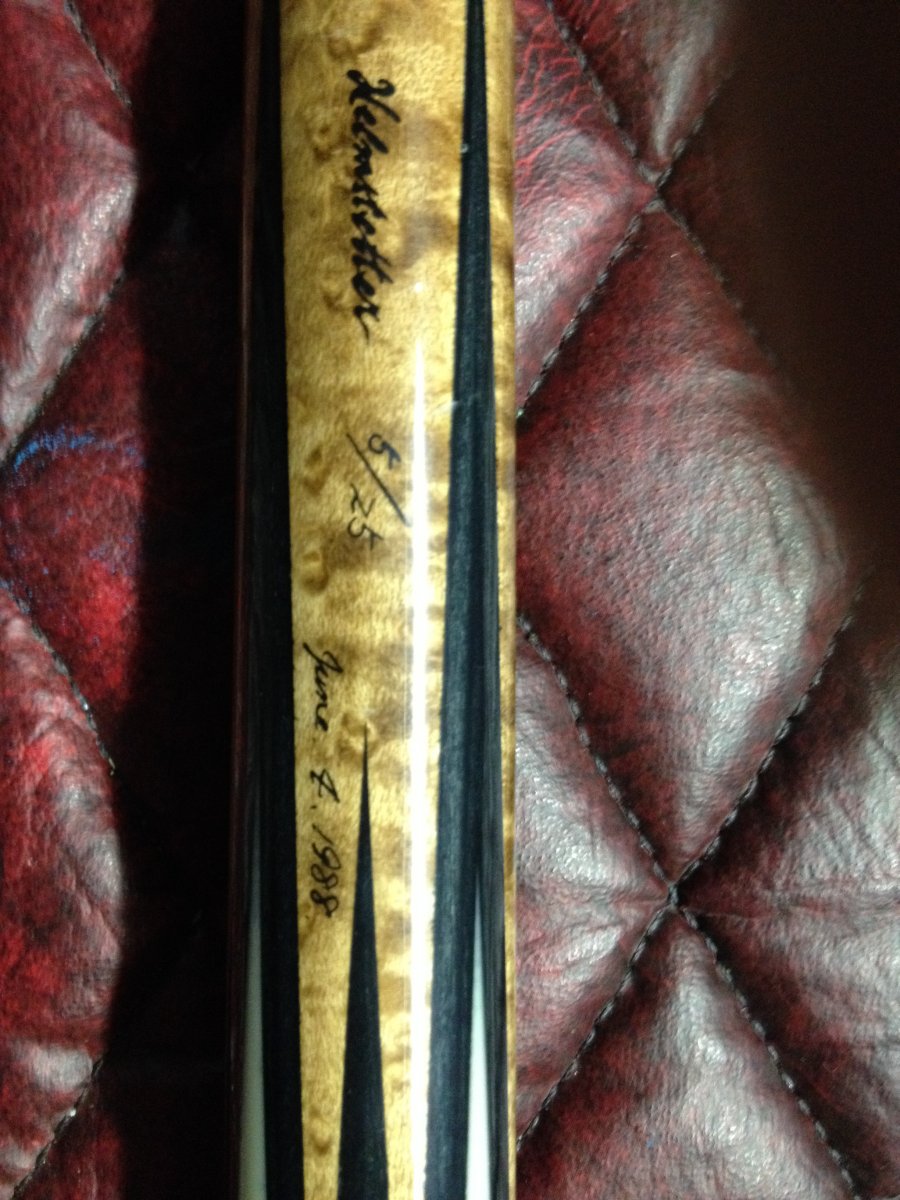 Starting to play pool again after 30+ years of none. Used to play a game in NH called "Around the World". Anyone else hear of it?

Didn't know anything of the diamond system or English (spin) until this last year. A lot to learn.

Anyhow, looking to improve my game and jumping on a league (APA and TAP) this month.
P

RMS said:
New here?
Introduce yourself, tell us where you hail from and a bit about yourself.
Click to expand...

Hi! I love playing pool (high 14/1 run=52 and snooker (high break = 82). I play in TAP leagues and have been to Vegas a few times with the APA (now no longer a member) I became a US citizen last year, but as I am originally a Brit, I love watching snooker on TV and am a huge fan of Ronnie O'Sullivan and hope to see him live someday. I saw Judd play when I watched him in the WC finals at the legendary Crucible in Sheffield. That was a bucket list come true. I love watching pool too of course and support Shane, Bustamonte, Appleton, Feijen, and Ortman, and also quite a lot of the upcoming 'newbies'. I am fortunate to have my own Brunswick 9' table as well. I am a professional musician (keyboards) and teacher of piano. I'm 15 years married and semi retired. Living the dream! Ambitions to at least play pool in the US Amateurs and maybe even the Open and (hopefully this year) see it live. Also some day make a hundred in Straight pool or snooker!
D

Hello, new here Been playing pool off and on since 2007 however past 2-3 months I started getting serious about my game. Have a 7ft Valley Table in my home and play/practice on it daily. I'm a 3 in APA 8 Ball League My record is 4 wins 1 loss currently(have 2 games left in the current session so I aim to be 6 - 1. I currently Shoot with a Lucasi LZD6 that I've had since 2014, I am currently saving up to get a Pechauer P08-K with P+ Pro 12.5 Low Deflection Shaft Upgrade. I'm excited to be a part of this community and hope to learn more about the game while here. I enjoy watching FX Billiards on youtube Bryan gives lots of great advice and some great drills to practice I highly recommend his channel to anyone. I also love watching professional billiards my fave players are Efren Reyes, Francisco Bustamante, Shane Van Boeing, and Thorsten Hohmann.

Greetings from south Florida!
I've been playing in APA for 4 years now and joined TAP just this year. I started out playing snooker and bar pool when I was younger, eventually met people after moving here who told me about APA. Rest is history!
I enjoy pool because there are so many ways in which you can make even a simple shot, and seeing other people's (and the pros') perspectives is great...!

New here live in South Carolina on Lake Marion, big into Bass fishing and used to be big into pool. I am originally from South Jersey. Used two shoot in two different league’s APA 6/7 in 8 ball. I have a 9’ Brunswick Ventura with new 860 and k55 rails and shot with a GB and a Meccui.
D

Hi, name is Joe, I live in the north east and have been playing pool on and off for most of my adult life which is quite a while.
Read the site over the years, first time registering.

dendweller said:
Hi, name is Joe, I live in the north east and have been playing pool on and off for most of my adult life which is quite a while.
Read the site over the years, first time registering.
Click to expand...

Welcome aboard. Careful what you post as the "Lord and Master" has a hair trigger on his ban ability.

Hello from Northeast Ohio. My name is Jim. I just got back into shooting pool after a 15 year break. A buddy and I joined an APA team. First time playing in a league and so far its been alot of fun.
You must log in or register to reply here.
Share:
Facebook Twitter Reddit Pinterest Tumblr WhatsApp Email Share Link
Top