Silver Member
It is with great sadness I announce the passing of Bob Vanover. Bob was known for his prowess on the pool table, chalking up numerous prestigious titles over his lifetime including 9 Texas State Titles, several national titles and a world record setting run of 9 consecutive racks in the finals of a state tournament. He was a dear friend of mine and I will miss him.

Gold Member
Silver Member
So sad the hear this news condolences to his family and friends that knew him well.

I am from Dallas so i was lucky to have had a chance to see Bob play many times over the years he was such a great player.

Here is a link to youtube video I took in 2011. The sound is not good but its Earl and Bob talking. I knew Bob for a few years played against him and several years later got to play teams with him on OB Cues in Dallas.
R.I.P Bob Vanover

jackpot said:
It is with great sadness I announce the passing of Bob Vanover. Bob was known for his prowess on the pool table, chalking up numerous prestigious titles over his lifetime including 9 Texas State Titles, several national titles and a world record setting run of 9 consecutive racks in the finals of a state tournament. He was a dear friend of mine and I will miss him.
Click to expand...

I am deeply saddened by Bob's passing.
A wonderful person, and a genuine monster of a player.
You have obviously been very close with Bob and he was fortunate to have you as a friend.
I will keep all of Bob's friends and loved ones in my thoughts and prayers.

Prayers and condolences to his family and friends.

Gold Member
Silver Member
Very bad news. No one ever had a bad word to say about Bob. He was a true sportsman on the table, generous to a fault, always ready to compliment his opponent and always gracious and humble in victory or defeat. What a gentleman! Bob had a big smile and greeting for everyone, truly glad to see you again.

Bob and I never spent a lot of time around each other but he still treated me like a good friend whenever I saw him. He would stop what he was doing and chat as long as I wanted. One of the truly nicest men in the game that I've met in my lifetime. Even though he rarely traveled because of job and family commitments, he was long recognized as one of the best players in the country. That is a rare distinction for a primarily "regional" player.

Thank you my friend for setting such a good example for others to follow. :grin-angelic:

Bob Vanover is a Texas legend, a gentleman in all respects, and a fierce competitor in 9 ball.

I saw him play in the 90's and he was not a young man. But his cue ball control was tremendous and he had great heart at the table.

I offer condolences to his family and close friends.
R

Silver Member
A Texas legend has left us......I and the rest of the world found out how good he really played back in the 80's. The River City Open in Austin, TX was held during the Rempe, Siegel, Miz, Hopkins, Varner era of domination and Bob finished 3rd losing a hill-hill match against Hopkins.

I remember it well, because they had a Calcutta, and Bob and me were listed together as they were selling groups of players that were considered second and third tier just to get some bids.

Bob offered me a share, but due to financial and time constraints, I had to turn him down. One of the worst decisions I have ever made.......he returned thousands to hisself and the bidders.

Silver Member
Sorry to hear the sad news. I didn't know him very well, only that he was the brother of Cigar Tom Vanover. Both were champion-level players. It's always difficult to lose one of our own in our pool community. May he fly with the angels.

Silver Member
Bad news indeed! I was just wondering how he was doing yesterday. Condolences to his family and friends.

Gold Member
Silver Member
R.I.P. Bob. It was truly a pleasure playing with you and knowing you for the past 25 years. You will be deeply missed
S

Silver Member
Sorry to hear this, a legendary player since before I began.

Silver Member
Rip to a nice man. Condolences to all his family and friends.

Silver Member
Sorry to hear this. Bob was a gentleman and a champion. RIP Mr Vanover


Sent from my iPad using Tapatalk
9

Silver Member
So sad to hear about Bob's passing. I had the pleasure to play against him for several years in BCA league. His game was incredible even though his prime days were behind him. I didn't know him that well but we talked several times during league or at league tournaments. One time, my girlfriend, Donna, and I had the pleasure of sitting with him for hours and listened to him describe the subtleties of the game while we watched the pros play the Ultimate 10-ball Championships in Frisco, TX in early 2011. I didn't know him that well but he was a very kind gentleman and was willing to share his insights with other players who loved the game. Latter that year, I drew Bob in our league tournament and played really well and put him out of the tournament. He shook my hand afterwards and said that I could tell all my friends that I put him in retirement. I was shocked at what I heard! He went on to explain how his game was going downhill for sometime and that he thought it was time to stop playing. I tried to convince him that he should still play since he still loved to play. A few weeks went by and I didn't see Bob at league anymore. The next league night came and I was happy to see Bob playing league again. He saw me and came up to me to apologize for telling me that he was going to quit. He said his wife told him to get back out there and play the game you love. Of course, I and everyone else were glad to see him back playing again. Below is a picture of us after I beat him in the tournament. Even with the loss, he showed great sportsmanship as you can see from his smile. RIP, Bob. My condolences to his friends and family. 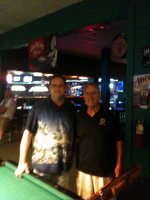