These guys will make you just about any pool ball and design you want.
http://www.epcobilliards.com

Many thanks for the EPCO link, DLT, I reckon they might be gaining a customer in the near future.

I'd be interested to learn if anyone has a set of Epco Billiard balls and could enlighten us to their quality, appearance, finish, etc? Are they comparable to Aramith?

K2K is probably our man on that score. His Lucky Irish set from Vigma (posted a page or so back) got me thinking about the different types of resins used in billiard balls and the subsequent lustre each different material produces. I'm aware of three resins: kobi, partek and phenolic. I stand to be corrected but believe Vigma employ the kobi plastic which, to my eye anyway, doesn't quite achieve such an attractive finish as Aramith's phenolic. I think the Guinness balls I recently purchased were probably made in China, too, as no amount of polishing seems to get them as shiny as some of my other sets in the collection.

Welcome to the thread, sir, and many thanks indeed for the pictures of your collection. Heartwarming to see your grandfather's passion for pool being passed down through the generations.

And you've treated yourself to a beautiful set of Cyclops balls, I see.

Gold Member
Silver Member
Hello, GDC - beautiful showing of balls and cabinet you have there, sir!

If I am correct, I see a set of vintage Hyatt "Fancy O" Clays on the top (circa 1930's) followed by the ever classic Aramith Premium set and lastly the Cyclop television tinted set with the new Cyclop Red Dot cue ball. A fine, fine collection (near perfect offering actually) on any wall - but especially yours, sir

Thank you for sharing your treasures with us.

All of the "stock" image designs are limited to 100 sold

They also do logo's and such.

K2Kraze said:
If I am correct, I see a set of vintage Hyatt "Fancy O" Clays on the top (circa 1930's) followed by the ever classic Aramith Premium set and lastly the Cyclop television tinted set with the new Cyclop Red Dot cue ball. A fine, fine collection (near perfect offering actually) on any wall - but especially yours, sir
Click to expand...

Spot on, on the bottom 2 sets. The top set of clays however, I will have to take your word for. If you look in my avatar, those same clay balls are what is being used. We (all grand and great grand-kids) used those until I took possession of the table/equipment about 10 years ago.

gdc25 said:
Spot on, on the bottom 2 sets. The top set of clays however, I will have to take your word for. If you look in my avatar, those same clay balls are what is being used. We (all grand and great grand-kids) used those until I took possession of the table/equipment about 10 years ago.
Click to expand...

I am quite certain they are indeed Hyatt clays - the resolution for zooming in on the picture was somewhat fuzzy but the colors and pattern and font style match the Fancy O's. A beautiful set for sure. I have one set exactly like those and still play them once a month. Love the sound!

K2Kraze said:
As RC mentioned already, the Prestige ball set is the unnumbered pool set that would fit the bill. The quality isn't Aramith, but they do play quite nicely for the reasonable offering price AND the gentleman that had those manufactured does a fine, fine job of personalized customer service that I can vouch for personally

Here the balls are again striking a pose... 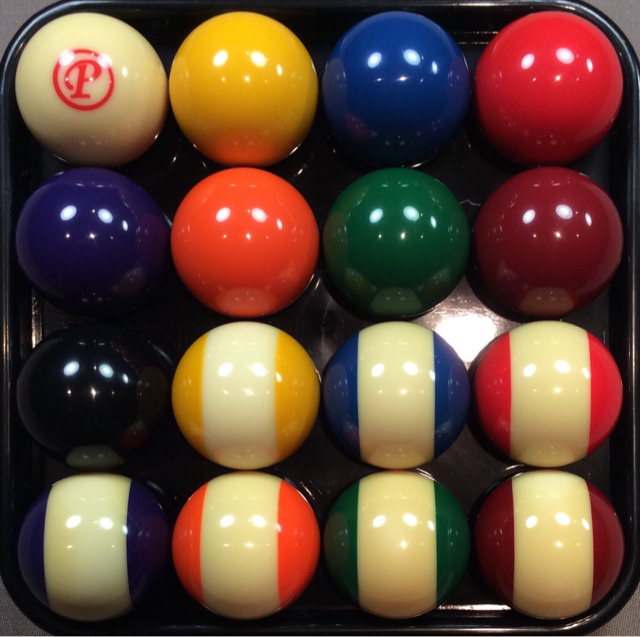 being very VERY color blind... these would do nothing more than piss me off! :smile:
B

I have a set I kept when I sold my snooker table a few years ago. Just like pool balls but smaller. I also have a pool ball antique rack similar to the last posters picture showing a couple sets of pool balls. gdc25 was the poster and the picture was about five posts before mine. Would sell it to best offer. Do not know the value of the snooker balls but they were with an Anniversary table approx 1950. May also sell them.
B

Have five sets of 3C balls. Only one set is ivory. One is bakelite or clay? One Aramith, newer. One super Aramith set older and very yellowed. One set made in Belgium probably 60s or so. I know the value of the ivories, but do not know the market value for the rest. Would trade all for a nice cue.

Pour a dram of your favorite whisky first. Perhaps a full ounce if you intend to stay seated for more than say, 10 minutes, since a dram is a wee bit and precisely 1/8 of an ounce. Neat is usually best. May I suggest a sip of simple, pure, room temperature water between sips to really unlock the treasures that await....

Do we have any Scotch whisky cue sports fans out there in AZB Land?

How about Johnnie Walker......which "officially" started as a blend of relatively crude local whiskies in the Walker family store around 1860....and 150+ years later is the largest distributor of Scotch on the planet. Award winning with over 20 labels. So far.

How fitting then to have a dedicated billiard ball set to share with a visiting friend over a friendly cue game and an offering of your preferred Johnnie Walker pour. The Platinum seems to be a favorite in my pool room.

Perhaps a small wager on this next set (or single game if you dare with your new-found courage of late) of Johnnie Ball to replenish the Scotch which has seemed to vanish before our eyes..... 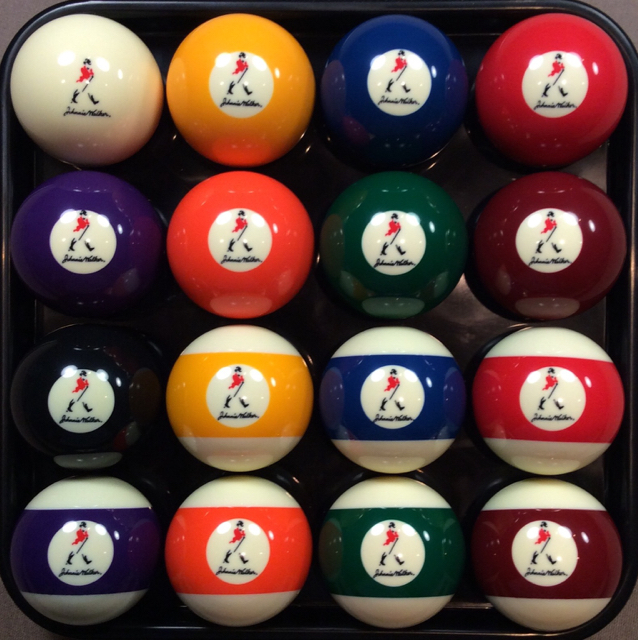 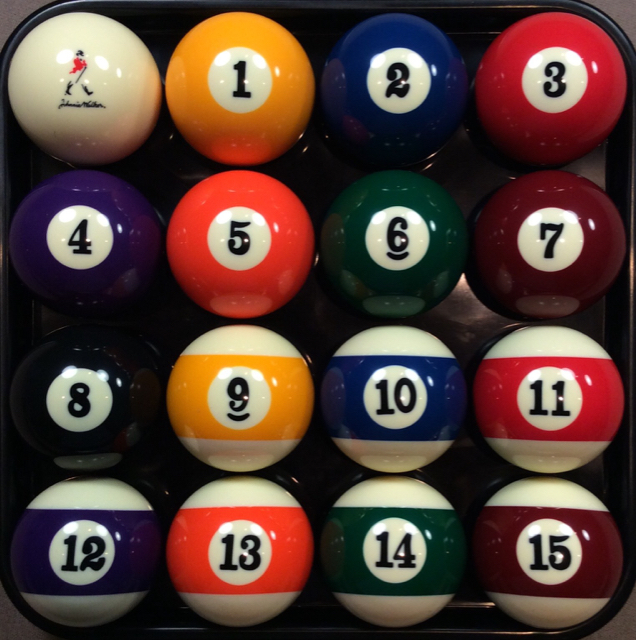 
Sent from my iPad using Tapatalk

Gold Member
Silver Member
Anyone recognize this set from those amongst my snooker collection by chance?

Introduced as a "new" game in 1959 at the News of the World Snooker Plus Tournament by none other than Joe Davis, the dominant snooker player that went undefeated from 1927 until 1940 in the World Championships. He won of course.

The game never caught on. 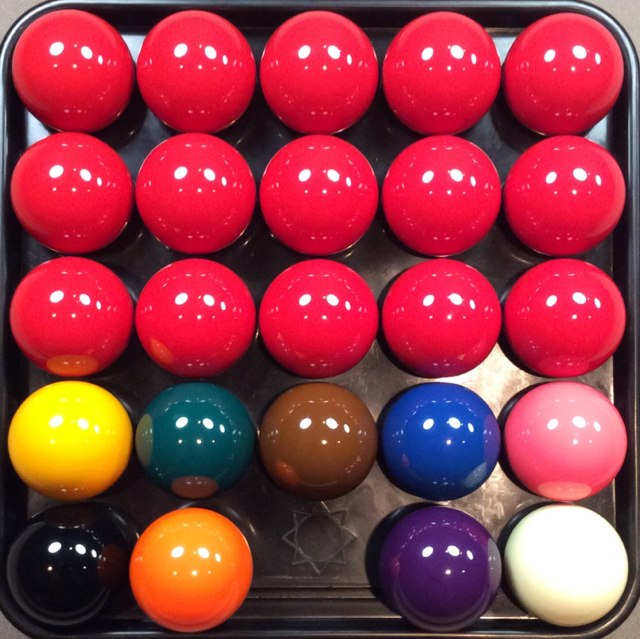 A beautiful set of Snooker Plus balls there, K2K.

Featuring two extra balls: the orange (worth eight points) and the purple (worth ten points) the basic rules are the same as for normal snooker, with the order of colours in sequence: yellow, green, brown, blue, pink, black, orange and purple. The orange was spotted between the pink and blue, the purple between the blue and brown. Joe Davis made a break of 108 the first time this game was unveiled in public. The highest recorded break was 156 by Jack Rea, well short of the maximum 210 (or 221 in a free-ball scenario).

Ah, the Johnnie Walker billiard balls. They appear to be in perfect condition, K2K, which makes them a very rare beast indeed. In the many years I have been collecting, scouring the internet and estate sales at every possible opportunity, I have only ever seen a handful of these wonderful sets in mint condition.

Speaking of which, has anyone ever glimpsed the apocryphal legends that are the Skinnie Magazine balls? Part marbleized, part solids, these phantom-like myths have become almost folklore amongst billiard ball collectors. Are they real or merely a romantic fairy tale? If only somebody could offer some conclusive evidence once and for all.

Gold Member
Silver Member
Ah, Rubick's - I knew you'd be keeping a scrupulous eye on the collecting thread. Good to have your attention and wonderful contributions as always....

Right you are, sir! Snooker Plus. What a fine addendum to the snooker rule book with the gleaming orange and pompous purple orbs added to attract one's greedy nature on the baize. I have played a slightly modified version of Snooker Plus on a 9' Gold Crown with all 2.25" balls using 10 radiant reds so as to not crowd the table - and it works beautifully! A few masterfully played shots on the orange and purple can secure a frame quite quickly if potting skills are up to speed

Now where in this world did you hear anything ever mumbled about the singular edition of Skinnie Magazine balls? I too have heard they are quite a find and quite possibly deserve a place amongst other collectible ball sets....

Gold Member
Silver Member
As promised. Back in a jiffy...

Rubick's, may I introduce you to the elusive Skinnie Magazine billiard ball set - the only set of its kind on the planet. No numbers. Adorned with two logo images on each ball, with the opposite side rotated a mere 90 degrees from the other, which provides a unique movie image quality as they roll down the table. 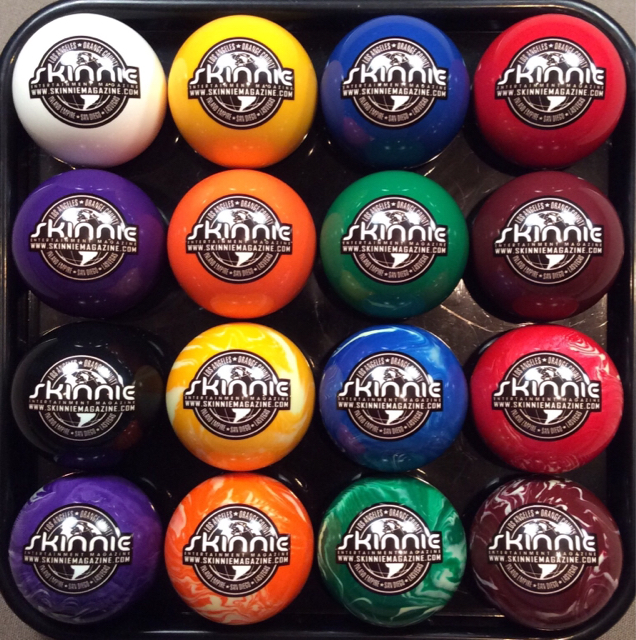 I am currently reaching out to the folks responsible for getting this one set crafted for the magazine to hopefully gather more insight as to their provenance and intended purpose - as well as why the decision was made to have only one set manufactured. I will report back as soon as I have anything worth sharing.

In the meantime, the quality of workmanship on this ball set is superb. The images are not silk screened onto the ball surface, but are actually part of the ball with a lustrous sheen. They play well might add They roll true and the individual ball weights are all within 1 gram of each other, which is something very few high caliber sets can claim.

I believe such a ball set warrants a special game - how about Skinnie Ball?

I am humbly honored with the responsibility to care for yet another fine ball set until such time as the next caretaker is summoned to take over one day. Until then, perhaps stop by sometime and we'll take the Skinnie's out for a roll...

Always good to hear from you, RC!

Staff member
Gold Member
Silver Member
This is on Ebay right now. They want $645. The 14 and 15 have defects. 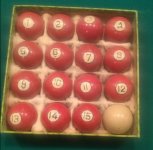 Gold Member
Silver Member
Thanks Bob - worth some investigation.


Sent from my iPad using Tapatalk