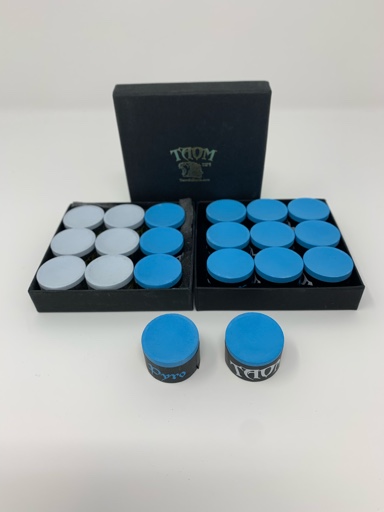 Silver Member
Rating - 100%
21   0   0
It is supposed to be the best for chalk neatness, longest duration for consecutive shots
without having to chalk, seems to last a really long time due to its composition, lotta folks
brag about it being superior to MC, BD, Masters (Pre-Flag), Kamui & all the other brands.

Despite that I refused to pay the going market price for Taom chalk to test drive it, I can
state with confidence that indeed, this is the best price I’ve seen anywhere for Taom chalk.
It’s not as well known as MC (2 pieces - 1 box) and costs more per cube, if that matters at all.

Silver Member
Rating - 100%
17   0   0
Literally the best chalk out there ( Pyro) No marks on the table or cue ball, and gets great action. No gimmick, and this price is very very good. GLWS
M

sos911 said:
i think there is nothing wrong with masters chalk. paying 20$ for a cube of chalk is... silly
Click to expand...

There is absolutely nothing wrong with Masters Chalk, or any of the other many brands.
Not to be redundant but Dr. Dave has settled this point about all chalks performing alike.

Some chalks need less frequent application to your cue tip and also are a lot cleaner too.
But as far as doing what chalk is intended to do, ain’t much difference in any brand chalk.

Now when you consider how much people invest in a pool cue, a case, gloves, tip shaping
accessories, tip replacement and considering how long chalk should last when applied right,
the cost on any chalk is pretty insignificant versus how much one spends on pool playing and
the things that go along with recreational pool, leagues, tournaments & owning your own cue(s).

I’ve learned it’s impolite to criticize a man for the cue he plays with or the chalk he uses, unless
it just happens to be red, or even black. Then the player should be told change the color or get out.
OMG.....red or black chalk........WTF........No, that should be banned just out of respect for the table.

let me know if you need some, I also have Fusion and Break/Jump tips

Gold Member
Silver Member
Rating - 99.3%
145   1   0
No difference that I know of. The Soft green version, I understand it's a little different than the rest. But between grey or blue, no difference.

I have a few chalks of each colors available right now

Nudge is as good as a wink to a blind bat.

Gold Member
Silver Member
Rating - 100%
3   0   0
the cleanliness side of it is why i want to give it go. I hate chalk dust on my equipment, and table. Canadian though, so there is no shipping to me. i am sure i will find it some day to try.