Who is this guy?

jay helfert said:
Everyone who said Harold Worst was correct. I always liked to say "Worst was best!" Probably the best pool player I ever saw. He didn't make any mental errors and didn't miss any makeable shots. He was 100% focused on every shot! Harold was totally composed at all times, with very little emotion of any kind. No big celebrations when he won, just satisfaction that he got the job done. Not one complaint if his opponent got a lucky roll, or even if he lost a match. He would compliment his opponent no matter what. He was like a train that just kept on running down the track. As close to the perfect poolplayer that I ever saw.

There have only been a handful of players who I would say could play a speed above the world. Worst of course. And then there was Denny Searcy in his prime. No one was even close to him playing Payball on a snooker table and no one wanted to gamble with him heads up at 9-Ball or Ten Ball. Mizerak had his time alone atop the Straight Pool world, with everyone else fighting for second. First Ronnie Allen and then Efren Reyes had a stranglehold on the game of One Pocket. Then Earl came along to play 9-Ball at a level never seen before. I used to say that he made a 9' table look like a bar table. But probably the second best player I ever saw was Jose Parica. Just flawless rack after rack, no one had a chance gambling with him. No one around like that today. That's my short list of the most dominant players I've ever seen
Click to expand...

Jay C"mon its Christmas we need another book
M

Silver Member
he was sick and dying at the time.

mikeyfrost said:
Times must have been really rough back then cause he does not look like a man in his 30s at all
Click to expand...

He had a terminal disease but he apparently didn't tell many people including close friends.

Gold Member
Silver Member
I'm gonna have to disagree with you guys. To me this looks like an old picture of Fats before he put on the weight and his hair grew all the way in.

Ask how my recovery from eye surgery is coming along...

Staff member
Gold Member
Silver Member
This picture looks like it could have been taken at the same tournament.

The complete edition of the New York Times published on Friday June 17, 1966.

timesmachine.nytimes.com
(I don't know whether you need a subscription to look through the NY Times archive or not.) 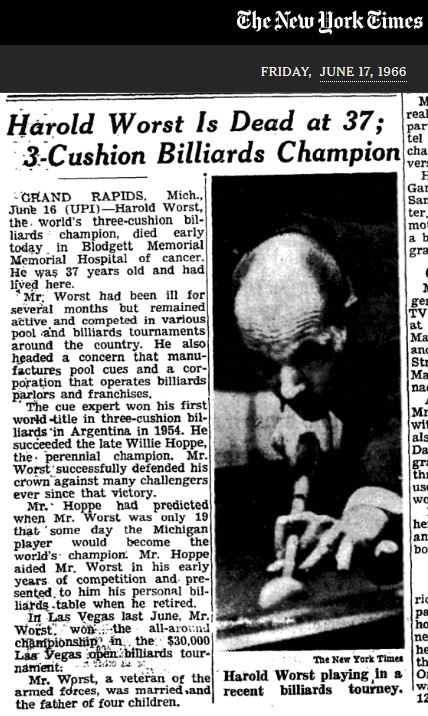 So far as I know the obit is inaccurate in stating that Worst defended his title.

This is from Johnston City, mid 60's. George Jansco hands Harold the trophy.

No handed breaks too

Very cool video. It must just be the video quality but it sure looks like Worst fouled the cue ball with his stick on the first break.

OneHandedBreak said:
Very cool video. It must just be the video quality but it sure looks like Worst fouled the cue ball with his stick on the first break.
Click to expand...

I think he had a lot of top on the cue ball.

Silver Member
I often regret never having gotten to see any of the old greats. I was born too late. I guess I am lucky to have found pool right after the Color of Money boom, so I at least had some fun with the game in my early 20's.
Show hidden low quality content
You must log in or register to reply here.
Share:
Facebook Twitter Reddit Pinterest Tumblr WhatsApp Email Share Link
Top