Silver Member
Greetings to all the Straight Pool Players on AZBilliards.

14and1.com has been working hard to introduce a program that is appealling to players of all skill levels, in order that they may compete on a National level.

I am not asking anyone to replace the league they are in now or to change the league format that they are already familiar with.

What 14and1.com offers most is the chance to compete with a handicapping system that will allow players the opportunity to win matches, no matter who they compete against, no matter where they are from. Plus, have a chance to move forward from their own League and compete on a National Platform for a respected title.

All that is asked is that if you enjoy 14.1 as much as I do, the format offered is well worth taking a risk and trying something new.

It works, if you work it.

The plan is for the National Championship to be held in November. So, now is the time to become involved in order to qualify.

Just visit the website at www.14and1.com to see the recent changes. 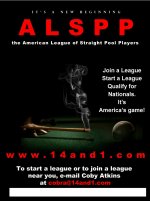