I Googled "pool halls near riverbend country club sugar land" and got this. 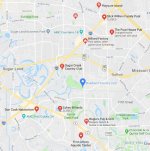 Silver Member
Most of those aren’t actual pool halls.

One place looks like it fits the bill: Sky Peak. Anybody know of that one? Is it a good one?

Gold Member
Silver Member
Wish I could help, but the last time I played on 9 footers was at Cue ‘n Cushion years ago. There were a number of good/great players there. I even remember a young 18 year old from the Baytown area (I think) who played pretty good. Name was Jermey Jones, but I have no idea if it is the same guy people mention here.

Looking at the map, go to Bogie’s. I’ve heard good things, albeit mostly about the one in North Houston. You can also Take Hwy 6 or jump on the Beltway and take 45 and hit Legends. That used to be a good place with players.

Silver Member
If there's a Clicks or Slick Willies nearby they're usually ok. Better spots in H-town for sure but they'll do.
K

Silver Member
There's nothing in your area

There's a little bar with bar with 7 Valley BB's and 5 Diamond BB's the place is called Jack's and its on HWY 59 & West Airport. The place looks like a dump from the outside but is got good Music and the crowd is a mix of APA and BCA players and theres some cheap Action.

Silver Member
Not too far, about 15 minutes from home so will have to try this one. I went to Trish Bida just now. They really take great care of their equipment. Glad I found some 9 foot gold crowns. Though wish someone had 9 foot diamonds, oh well. I was surprised that they have about twice as many billiards tables as pool tables, and a few Gabriel’s also. Never seen so many billiards tables in one place. Even saw a father teaching his soon how to play one rail... I must learn that game now!

Silver Member
What are the good places in Houston?

I sure miss Rochester though, there were two rooms with about 15-20 tables each. All of them were Diamonds in both sizes. But the kicker is $10 play all day at both places...

Gold Member
Silver Member
There are no real pool halls in Sugar Land [or southwest houston really]. I think the best place is over there is probably Q-ball snooker. They have a few pool tables.

Then Bogies west. Then Bogies/Big Tyme way up north. Then Legends down south. There are a few others like slicks and fast eddies around as well, but you are going to have to drive a little ways no matter what.

When I lived in Sugar Land, I would also play in a few of the 3-cushion pool halls with pool tables.
There are a few maybe 15 minutes away. Trish Bida is nice. There also used to be a few smaller places in that general direction as well.


Legends is the top pool room on that side

All the rest are up north on my side

Silver Member
There are a couple of places in your neck of the woods, but most of the halls are concentrated on the west/northwest of town.

It's a drive for you but Big Tyme is a good spot, good tournaments and you get a lot of pro's coming through there.

And to the person who mentioned Jeremy Jones playing out of Cue/Cushion in the early 90's - that's the same Jeremy who ended up playing on the Mosconi Cup team and in the One Pocket Hall of Fame - we're about the same age and he used to crush me just practicing back them, even with me getting huge spots!

Silver Member
Well I just decided to make the drive to Big Tyme. Worth every minute...

JohnDoe said:
Well I just decided to make the drive to Big Tyme. Worth every minute...
Click to expand...

they have a 10ball tournament tonight at 7 if your there that long
let me know if youd like to meet up next time, im just a few miles away from there

I’ll stick around for the tournament but no way I’m participating. I just started reading “Play Great Pool” and am relearning how to do this the right way from scratch. I look like such a noob right now shooting with an orthodox stance... it’s going to be a long haul.
You must log in or register to reply here.
Share:
Facebook Twitter Reddit Pinterest Tumblr WhatsApp Email Share Link
Top