A new cue from a new 2 u cuemaker from Germany

Silver Member
have fun (or not)

Meanwhile a really good buddy of Big Tattoo and me, has Cem (he is a turkish guy in Germany) reached a level which doesn´t stand behind.
He isn´t yet into elaborated inlaywork, but damn, he builds a hell of a player!

The most famous cue is probably the cue of Roman the Czech Attack Hybler. You could find it at http://cuetrader.wordpress.com/ to get an idea of what happens in Germany.

Second to none is his paint- job. Never- really never have seen a better one. Maybe same level (e.g. Tony at BB), but never better!

What´s special to Cem, is his way to work on develpment of the playability. I have never seen a guy, who experiments that much. When he gets a new stick in his fingers, you feel like on exam at the doctors. He also plays a really good Pool and knows, how a cue has to feel and work.

This cue features 6 cocobolo points in straight grained maple. Pin is a 3/8x11 and he uses the Allen weight bolt system (thanks to Big Tattoo).
The cue has a screw in extension (near to Mezz) and comes with two shafts in 12,5 mm (one made of a blank from the McDaniel stock, one made of bowling alley).
Weight is at 19 oz and forward balanced (to my specs).

He also has a really great hitting laminate- wood, he builds by hisself.

I´m not a dealer and probably won´t get one. But this guy and his cues are worth to get supported.

The sketch was made be me. I post it, to give you an idea, how perfect this guy met the sketch.

Silver Member
I used one of his break cues whilst I was in Munich a couple of weeks ago and I have to say it was one of the best I have ever tried. Mashes the balls up. Great cues.

Silver Member
What a pitty you hadn´t the chance to try some of his cues. His breakers are really great, but his players are nuts in my opinion.

I used to own different cues and played even more. There aren´t many top- cuemakers, I haven´t tried. But even if I seem a little bit euphhoric: All Cem- cues I played so far, had been outstanding (besides one prototype with a laminated core- that was heavy metal and for me not playable).

Silver Member
very nice Cue you get Buddy:bow-down::bow-down::bow-down::thumbup2:
as for Cem, he makes the BEST paint job I have ever seen and I seen alot in my Life. Wait when you will see my OLD 6 Pointer Mobley that needs a refinish (Randy not have any chance to do that after his accident,Cue was sitting over 6 Month in his Shop and I need this Cue for my last long Thailand trip) you will be very impressed:wink:
hopefully can pick it up this week with my NEW Cem Breaker:grin:
Si: waiting for a price on the big Szam:wink:
Ralf 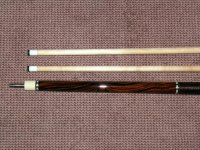 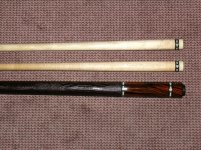 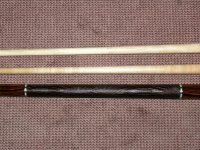 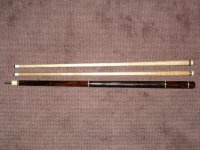 Silver Member
And here my 2nd great cue from cem. It was made from a prather blank, a McDaniel shaft and a laminated shaft. 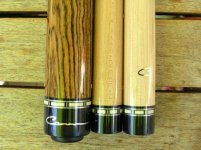 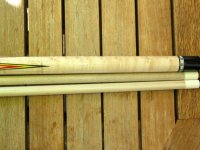 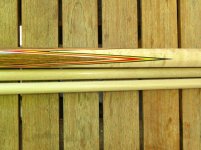 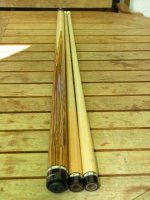 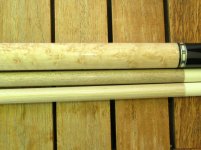 Silver Member
What prices do his cues start at .. I love the cocobolo plain jane..???

Silver Member
Depending on Ringwork an amount of shafts (and blank- type of the shafts), it starts in the $ 700 range. He uses hart maple shafts of very good canadian maple, blanks of the McDaniel- shop, bowling alley- wood or his own laminates (48 layers alltogether). If you keep your eyes closed, you won´t a difference between this laminate and real good solid shaft.

What you get, is a perfect executed piece of playability.

As you may see in the pics on top, he always is into perfection. The figures of the woods aren´t twisted after the ringwork- he cuts the wood and keeps the natural flow.

Silver Member
Fro those who are interested in- some better pics...

Cem also didn´t uses CNC, it´s all pure hand-made......the playability of his Cues is absolutly awesome......everyone who had tested one, loves it!!!

Silver Member
go and get him to the table. You´ll be surprised!

I just don´t know, how good his English is, but Pool doesn´t need a language
S

Silver Member
Cem is a very nice person, too. He really does a great job.

boombox, your cue is absolutely awesome.

let me know, if you travel 190 Miles to the west (Stuttgart, Karlsruhe). Big Tattoo and me would look forward to that visit!

If you need contacts in Munich for playing pool, boombox will surely help you- he is from Munich.

Another collector is Thomas Gollowitsch in the southwest of Munich. His "happy billard" in Martinsried is one of the nicest poolplaces I´ve been.
F

let me know, if you travel 190 Miles to the west (Stuttgart, Karlsruhe). Big Tattoo and me would look forward to that visit!

If you need contacts in Munich for playing pool, boombox will surely help you- he is from Munich.

Another collector is Thomas Gollowitsch in the southwest of Munich. His "happy billard" in Martinsried is one of the nicest poolplaces I´ve been.
Click to expand...

i mite be over that way in a couple days i'll let you know, thanks very much, i have my Boar with me, been playing some while i'm here.

Fatboy said:
i mite be over that way in a couple days i'll let you know, thanks very much, i have my Boar with me, been playing some while i'm here.
Click to expand...