Silver Member
I received my new case from Joe Whitten today, and just had to show it off.

I had ordered it just before SBE, after talking to Joe, and discussing a custom design I had in mind. Of course it was an idea NO ONE had ever approached him about, but after giving my input, he agreed to try to produce it as I requested.

After it was completed, he called me and asked if I had a MILLION $ BILL for the display window on the case.....he said it turned out great!! I think so too!!

2X4 Black Lizard with smooth black accents; small, and large pockets (with jump butt compartment); carry handle, and shoulder strap. Note the more rounded design of the body of the case, I liked that feature! This case is LIGHT! I've been using a Instroke 3x5, and carrying it around all day, was a chore! With 2 cues, 4 shafts, a jump butt, and all my junk, this feels about half as heavy as the Instroke when it was fully loaded.....I may try to find a scale for a definite weight later. 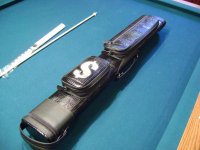 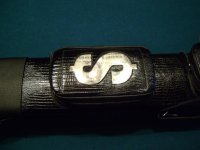 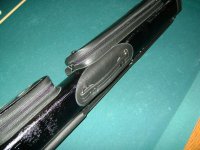 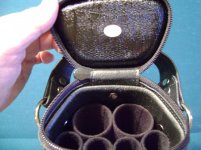 I think when I carry this in, I may need some more backup in the billfold....but at least I won't be $ short when I arrive!!!

By the way, Joe INCLUDED the dollar bill! Thanks, Joe! I'm sure that million dollar bill is just over the horizon!:thumbup:

Silver Member
That is one sweet case, love it!

Silver Member
Nice case, Charlie! I'll have to check it out on Thursday.