Memphis Open Wed July 23-27 - Details Including How to Watch

You gotta risk it to get the biscuit.

Gold Member
Silver Member
Updated bracket (without having to go to Facebook :smile?

DOPC and Terry Hanna have posted some brackets here from Facebook. All information is on the PoolActionTV Fan page on Facebook.


First match up is Joey Gray vs Justin Hall.

Did Archer really just put a 6 pack on Rubin? Silver Member
Up next we have Johnny Archer Vs Jason Klatt. Silver Member
The Finals are about to begin. We have Justin Bergman (Hotseat) Vs Jason Klatt (B-side). True double elimination race to 17. Silver Member
Can we get an updated picture of the chart? There's a lot of matches in the middle rounds that I'm curious who won.

Silver Member
Currently in the second set score is 8-8.

Congratulations to Jason Klatt for winning the 2014 Memphis Open 10-ball event. Jason was put on the B-side by none other than Justin Bergman for the hotseat match. As fate would have it, they faced one another yet again this time for all the cheese.

This was a true double elimination, race to 17 10-ball event. Jason had to and proceeded to double dip Justin Bergman to claim his victory in the late/early (depending on your perspective) hours of the morning.

Congratulations to Justin Bergman for winning the A-side of the brackets. Unfortunately for him the "Hotseat" proved to be the "Iceseat". In my opinion, Justin in the finals was not the same Justin we watched compete all week long. None the less, he put up an admirable fight against Jason and forced Jason to earn his victory.

Congratulations also go to Johnny Archer for taking third place after facing Jason Klatt. What more can you say about this guy, he's a legend in the sport and certainly no chump on the table. Jason was a tough competitor for Johnny and gave Johnny all he could handle.

Fatigue and exhaustion certainly had to be a factor for all competitors at this stage of the event. This event started on Wednesday with the One Pocket event and kept on "Trucking" all the way up until Sunday night/Monday morning nearing 5am CST.

A special thanks to Highpockets in Memphis (Click here). This establishment and it's owner who obviously love the sport and its people, provided a first class experience for everyone involved. A huge thanks to Highpockets for making this event a huge success and we all look forward to next years Memphis Open. 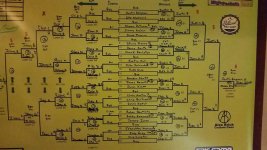 mike davis said:
can we get an updated picture of the chart? There's a lot of matches in the middle rounds that i'm curious who won.
Click to expand...