Many thanks for the interesting links and pictures, they're always much appreciated.

K2K: Do you have all the MLB and NFL team sets, sir?

Chuck: Aramith should seek permission for a Rolling Stones set, a guaranteed winner!

Many thanks for the interesting links and pictures, they're always much appreciated.

K2K: Do you have all the MLB and NFL team sets, sir?

Chuck: Aramith should seek permission for a Rolling Stones set, a guaranteed winner!

As for major league sports teams, I do not yet have ALL of the teams

What an amazing collection it would be to have every major sports team to set up matches and tournaments with. 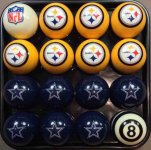 Silver Member
Back to one of the (relatively) unique sets still out there...with a little history tossed in for good reading and the generally curious. 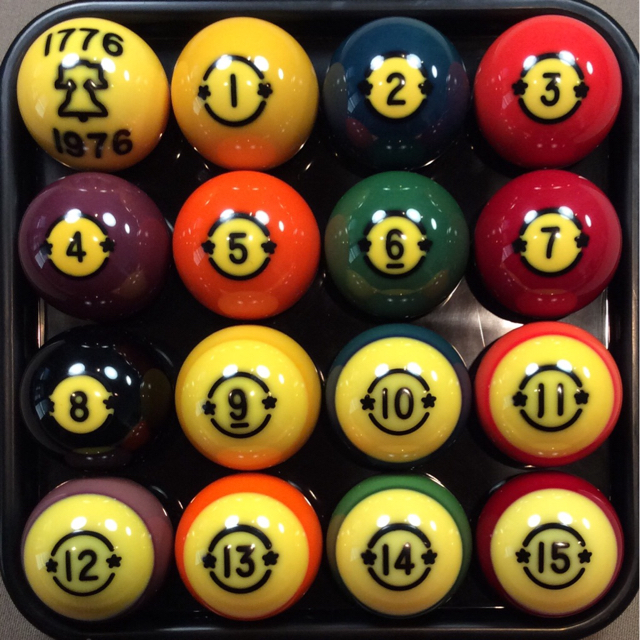 Made by the Albany Ball Company out of Albany, NY - makers of the somewhat famous Brunswick Centennial balls since 1945 - had realized an unfortunate decline in business that nearly put them "out of business" during a rough stretch of 3 consecutive years in the mid 1970's. They reorganized the company and decided to introduce this new set and design to not only celebrate our countries 200th anniversary, but revitalize their ball business.

Instead of the traditional darts or notches found on other balls, Hyatt put a star to help distinguish this set from the Brunswick sets, even though it was virtually the same ball composition-wise. Along with a truly unique Liberty Bell cue ball (that caught much criticism).

This was the last great ball and set made by this great company that eventually succumbed to the onslaught of cheap imports in the late 60's and 70's and closed their doors for good in 1986. The Hyatt balls were "the standard", and for nearly 2/3rd's of the 20th century, they really dominated.

They play and sound beautifully - reminiscent of the same era Centennials of course. Except for the star.

Interesting if it's about something we actually have an "interest" in

In the late 1930s before WW II, a brilliant German chemist named Doctor Koebner was working for a German chemical company that went by the name Raschig, and it's been documented that he developed the phenolic process.

A long story shortened, Dr. Koebner was Jewish and wanted to escape Hitler's Germany as well as the assured persecution of the Jewish People. It was miraculously "arranged" that he, along with his guarded formula, went to work for the England based Composition Billiard Ball Supply Co. Ltd until his death in 1949. Composition subsequently licensed the phenolic technology to the Hyatt Ball Co in Albany, N.Y. in the 1960s to produce balls using this process, which later became the Albany Billiard Ball Company. It's worth remembering (I believe) that Hyatt was the original manufacturing company responsible for creating the Brunswick Centennials. Hyatt, then Albany BBC, remained the only U.S. billiard ball manufacturer until it folded in 1986.

It gets more interesting - quickly.

When the German company Raschig went out of the ball business, Saluc (maker of Aramith balls since 1923) purchased its production equipment and their phenolic resin formulas - because Raschig's formulation was, in their opinion and testing, vastly superior to their own. And Saluc needed to be competitive with Composition and Hyatt or be faced with an untimely demise.

Fast forward a few decades..... Saluc was purchased by Simonis - yes, that Simonis (THE billiard table cloth/textiles manufacturer since 1660) in 2012.

Raschig had the best phenolic formula. Which Saluc acquired (think Aramith) when they (Raschig) folded.

That formula, along with it's creator, made its way to Hyatt/Albany BBC. Saluc's competitor.

They both - supposedly - had the same FORMULA.

The finishing processes of course were vastly different I presume, but it's still a somewhat fascinating story ----- and to own a set of Raschig balls as well as Hyatt's, Brunswick's and Aramith balls side by side and play them all while imagining Dr Koebner travels and travails, is a privilege not taken lightly, I assure you

Here are the Raschig balls I was fortunate enough to acquire recently from my friend Mark at Pool Table Magic. Thank you again, Mark. I will tend to them diligently until the next owner takes over in about 5 decades 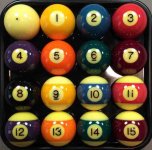 You are a gentleman and a scholar, sir. Many thanks indeed for all your contributions to this thread, they are particularly interesting to me both as a fellow collector and as an Englishman learning something about American billiard history.

Here is a Texas rivalry to get your game in the spirit.. 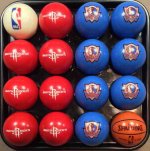 Those rules are (similar) to Point System Eight Ball if anyone is wondering :-D

Gold Member
Silver Member
Didn't want to let the cat out of the bag just yet but we are in the process of rebuilding the Chicago Billiard Museum website with over 30,000 documents and artifacts.

I ( and the public) would love to see your ball collections included in our database.( with full credit to you of course)

If you are interested, please shoot me a pm or email so we can arrange the details.

I would be glad to help if possible. I've sent my email via PM.

Silver Member
Playing ball with two other friends is almost the perfect arrangement allowing one to rest while the others play.

We draw pills to see who decides what game comprises the first set in a race to five wins. Then redraw to see which two players face off first.

The winner retains the table and the non-winner (or whiner in our case) gets to rest the next game. And so on. We repeat after the race to 5 wins crowns a king and we start over with some other game variation.

Sometime we'll play all three together using the set I have pictured here, with the exception of a solid black ball (or an eight ball) that we spot in the center of the table. Not cutthroat. Just simple 3-player Rotation eight ball.

Makes for some interesting runs and safety play. A small wager increases the whining I've noticed 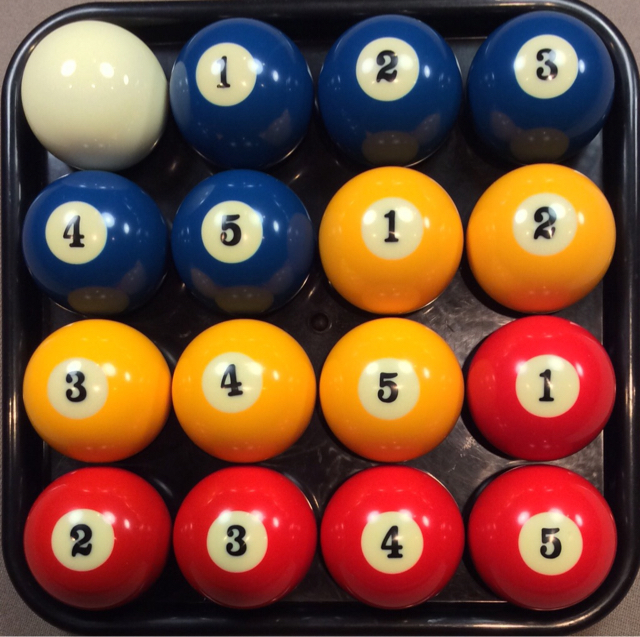 Silver Member
When I'm feeling like the other boys need a change of scenery - or can't handle the tougher rotation part of the 3-player 8 ball, I'll bring this set along in the mysterious visiting ball case 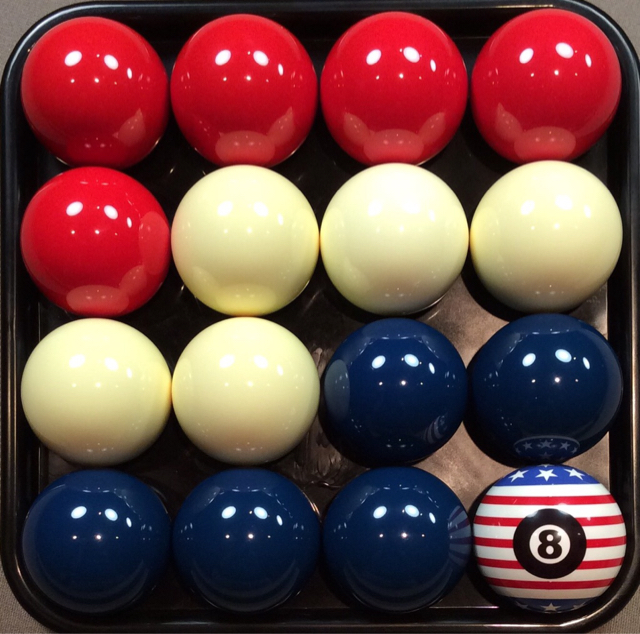 Silver Member
The VIGMA ball manufacturing company out of Hong Kong does put out a decent ball set. For over 50 years, they have been perfecting their Kobo resin formulation which they think in many ways is superior to phenolic resin. I know - that's debatable. Some of their sets have an incredible finish and detail to them that have stood up to regular use and cleaning in a Diamond ball polisher, such as the set I'm showing here.

This set gets used as a nice change and alternative to other poker sets - mostly seen and manufactured by Aramith or Crown Games (which I will share in the following days).

These are called the Heart warming European (with numbers) set... 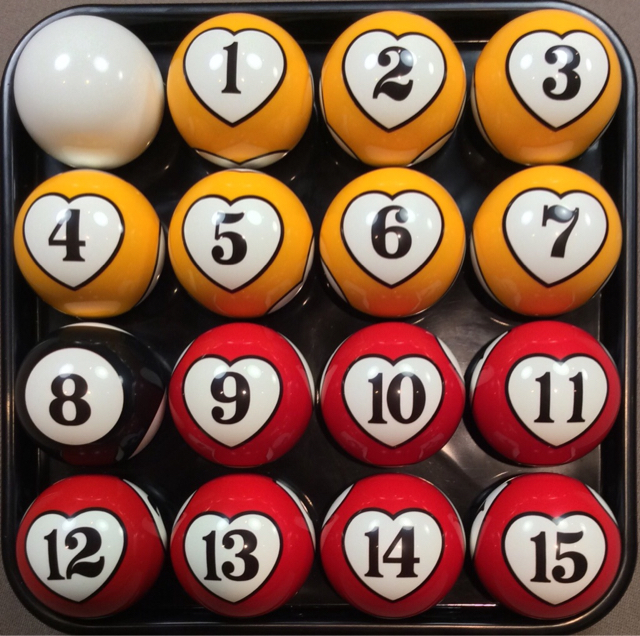 Silver Member
Here is the colorful poker set from Crown Games. They have a beautiful finish and play nicely. There are a lot of ways to use this ball set in other game alternatives or other fabulous games with 9+ versions they developed that come with the set when you purchase them. 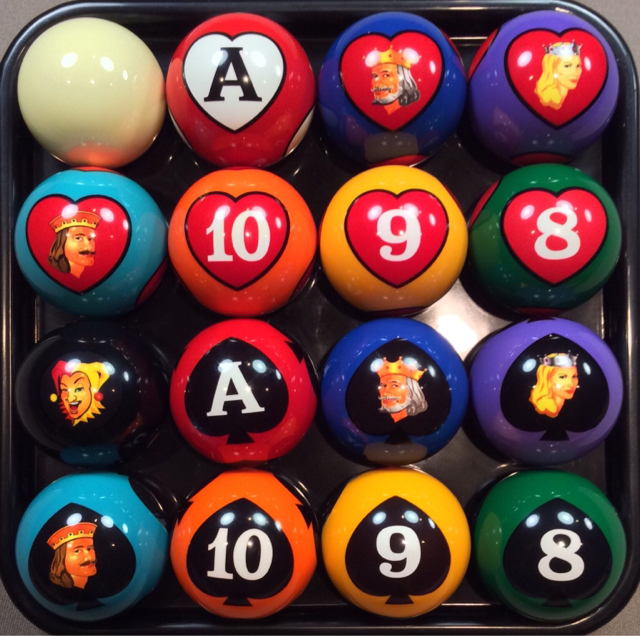 Sent from my iPad using Tapatalk

Silver Member
And no discussion of playing or collecting poker themed sets or balls would be complete without the venerable Aramith Poker offering. 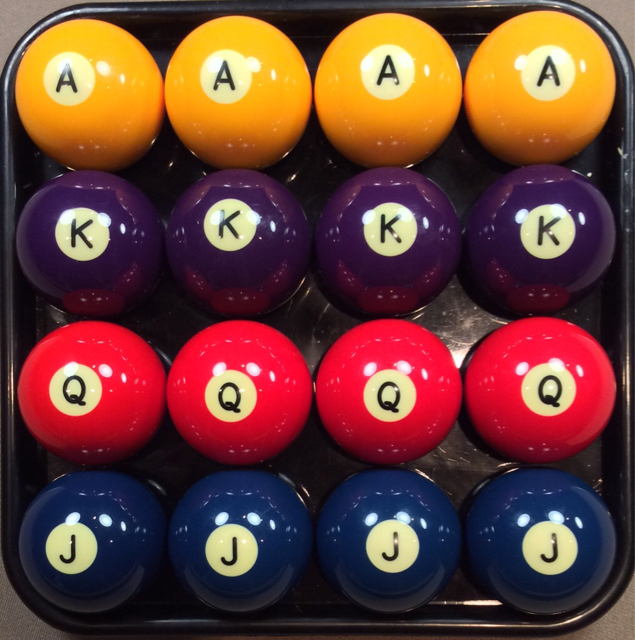 Known as Krōm Première (premium chrome) and designed by a gentleman called Pierre Deveaux from Belgium, they are regulation size and weight and seem to play quite well. I believe the plan was to crowd-fund the project but, alas, it was ultimately unsuccessful and the balls were never brought to a global market. Silver Member
I've only ever seen these balls as a photograph online. I presumed they were some sort of promotional idea for Shelby Cobra, but if anyone knows where I might purchase a set I'd be extremely grateful. Silver Member
Ah, apologies, I've been a fool. They're not pool balls at all, they're gear shift knobs.

Rubik's Cube said:
Ah, apologies, I've been a fool. They're not pool balls at all, they're gear shift knobs.
Click to expand...

If they didn't have drilled holes yet, they still may be fun to shoot around though