Who made this unmarked cue.....import?

Silver Member
Anyone know or have guesses on who made this? I feel I have seen this style bumper before but can't place it. There is a hex head bolt under bumper. 5/16 x 18 piloted joint. Sorry for the bad pics. 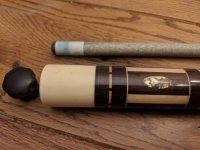 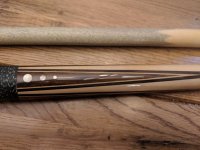 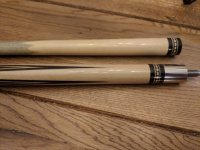 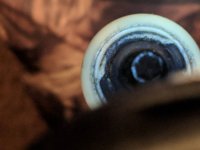 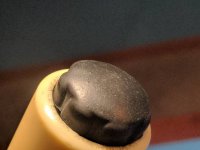 Sent from my Pixel 2 XL using Tapatalk
B

Silver Member
Actually...bumper probably isn't original........anyway, if anyone has any thoughts I would welcome them.

Silver Member
These cues have been sold under a variety of brand names. Same company that made Cobra Cues....Kao-Kao.


Some of the brand names:
Cobra
Cobra Professional
Slyfoxx
Mizerak
Mizerak Professional
Craftmaster
Competition
GW Collection (Dave Pearson) But not all of them, only the best ones.
Lishan
Pinnacle
Sierra

There have been more.

Without any markings, your guess is as good as mine as to which brand name this cue was originally sold under. If we are lucky we could find a catalog pic, but I am not holding my breath.


Some of them are quite good. Ferrule materials most often suck. Some kind of PVC I think. Many use synthetic wraps, the better ones use linen...yours is linen. From the shaft staining it looks like the cue has been played a lot. There is a pad under that tip and the ferrule material does not look original, so I think somebody seriously played this cue.

You have your hands on it, you can see and feel it isn't a bad cue.

Many are junky clunky cues sold through department stores. Some of the best were only sold through cue dealers and were not cheap. Some, at the top of what was made, rivaled the best cues Adam ever made in quality, construction, and materials.


Most were 5/16x18 piloted pin cues like yours, some flat faced, some 3/8x10 pin, and a few, like Sierra were 5/16x14 piloted. They did produce some cues with nylon inserts like Huebler as well.

In the 80's, 90's, and into the 2000's such cues were often bought by guys who couldn't quite afford a Meucci or McDermott. They were and are "value" cues. Often, especially among the better ones, just as good as their more expensive US made competitors.

It's a long shot, but the cue may have been sold by or distributed by Cue and Case here in St Augustine Florida.


And that's all I have off the top of my head.

Silver Member
Thanks for all the info ChopDoc!

With you pointing me in the right direction, I actually found this model on the kaokao website, and appears it is one of those newer Palmers.

Not an expensive cue, but the fit and finish seems shockingly good. 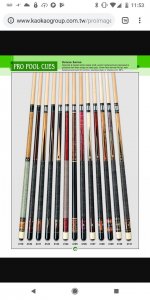 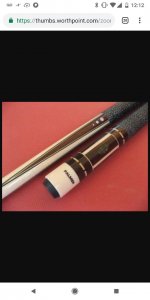 Glad I could help. :smile:

It is still possible it was sold as another brand since it does not say Palmer on it.

As an example, I have seen the exact same Kao-Kao cue (not this one) sold under seven different brand names, one of which is unmarked. That cue has been produced from 1991 when it was introduced in the first Cobra line by Harold Miller, until the present day under those seven different brand names. Some have been better, with better finish, real linen or leather, and some were more inexpensive versions with a thinner finish and synthetic wrap, but all the same design from the same maker. That's a darn long time for a single design to be continuously made. I have six of them because I was able to snag them cheap. The last one is still available new but the price is stupid high IMHO. I'll get one of those eventually. Why? I don't know, just a little project to get that cue from every brand that it was sold under. Cheap.

Beebop21 said:
Not an expensive cue, but the fit and finish seems shockingly good.
Click to expand...

As I said, you have it in your hands and can see and feel what it is.

Your statement sums it up nicely. :smile:

Silver Member
I looked at completed auctions on eBay, and found one just like mine, similarly unbranded although the seller referred to as a Palmer model 4131. I'm not clear on what has happened to the "new" Palmer Enterprise, but made me think there must have been a batch of these left over perhaps after whatever the agreement was with Palmer terminated, that might have been dumped wholesale or something......

Beebop21 said:
I looked at completed auctions on eBay, and found one just like mine, similarly unbranded although the seller referred to as a Palmer model 4131. I'm not clear on what has happened to the "new" Palmer Enterprise, but made me think there must have been a batch of these left over perhaps after whatever the agreement was with Palmer terminated, that might have been dumped wholesale or something......

Sent from my Pixel 2 XL using Tapatalk
Click to expand...

Not unlikely I would say.

What's funny is that the exact cues on Ebay with the Palmer logo will sell for substantially more than those without the logo. Because it's a "Palmer".


It's also possible it originally had a sticker on it that said Palmer and even one with the model number. I have seen that.

Silver Member
This is fun: