Silver Member
i didn'twin the money when i was 10,it was 20 or so years later when this episode took place
and i don't mean to leave you woith the idea that scores like this were ever common
nonethe less it was a lot in those days

lets face it pool is a grind, combine golf and poker and propositions and you might have a chance

not a real good one these days

It seems almost impossible to believe the stories about Titanic winning millions back in the 20s
these days in Dallas all i see is very cheap pool,it makes me know that it was time to call it quits
Ty said Daddy warbucks beat him for $200,000 or more,i forget the exact figure,playing pool
it was the largest score ever at the time

i think Archie won $1,000,000 from Bobby B on a bar table in the 90s
I spent a month trying to get Archie down ,but All i did was waste time and money
I didn't actually lose money gambling other than seed money,but that and the nut
or high cost of living takes its toll

Guys like Papa Glenn,Verl Horn,Eddie Oneil and their sort are not to be expected again
Maybe its for the best.

Combine that with old age,stiff bones,poor eye sight and diminished desire or stamina.

Poker still has money, just stop by Griffs and watch them play high,
It hurts to see that kind of action and to know it will never be right for me
I can't keep up.

There was a time when finding a poker game was the hardest part,
now its easy to find a game but the skill level has surpassed me and then some
Last edited: Nov 29, 2019

ShootingArts said:
I can't recall Terry's handle at the moment. He used to ride motorcycles in the big drums at the fair. Last I knew he still had a wall of death at his house. He could give us the skinny if he was so inclined.

I do remember there was a word that meant it was time to go to war. If you hear somebody yell that at a carnival or fair it is time to get out by the most direct route, the hell with fences gates and minor details.

I worked with or hired a few guys that had been carnies over the years. They had stories to tell but most of them were very closed mouthed with little to say to anyone that hadn't been in the life too or wasn't still in the life. 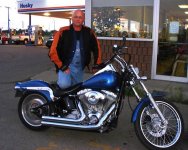 The gas station is husky....so is Terry
D

Silver Member
is this tery from las vegas?

deanoc said:
is this tery from las vegas?
Click to expand...

I believe he’s from Canada.

Silver Member
I too went to the Texas State Fair In the early 60’s traveling from my small East Texas town with my parents and sister. I learned the first time I shot the cork rifles that the fact you were shooting light weight corks that were not aerodynamic that I needed something to give me a better than even chance. The next year I brought some small tacks to insert in the end of the cork when the carnie wasn’t looking. Got my stuffed animals and stuffed it up the carnies keister.

deanoc said:
is this tery from las vegas?
Click to expand...

If Terry just faded out we need him back! One of the good guys.