"not bad,for a blind man"

Silver Member
Saw this on a wall at a pool room, didn't recognize it. It appears to be a seen from a movie but nothing I've ever seen. Anybody recognize the actors or movie? That's a pretty big pile of cash! Interesting chalking technique

Thanks in advance for any help

Pretty sure that's a still photo from "The Player", a movie with Minnesota Fats that I don't think was ever released...

Runner said:
Pretty sure that's a still photo from "The Player", a movie with Minnesota Fats that I don't think was ever released...
Click to expand...

I think you nailed it, Runner.
The guy chalking the cue looks like Como..
...but who uses a black ferrule?
....and you'll notice the sign about not sitting on the tables....
...but the guy puts his beer can on the rail?....

I have an extensive collection of photos and data about the movie if anyone is interested.

Now that would be a great "get", finding "The Player" and putting it on DVD!
It DOES look terrible... about that chalking...

BTW, I have the awesomely bad "Kiss Shot" with Whoopi Goldberg, and Dennis Franz from NYPD Blue as the road manager... I think it came out after C.O.M.
Meh...
3

I would have wagered that 'beer guy' was Robert De Niro....woulda lost again.
R

Silver Member
Judging by the way he's chalking his cue.....this guy has never played pool before. Must be an actor in the photo.
S

In the comments of the link listed above by klone:
http://www.billiardsmovies.com/billi...lliards-movie/

is this:
"Austin Holliday
September 20, 2015 at 8:48 am
My dad was in this movie (he’s in the middle of the promotional card shown on the page). We have a color copy of the poster, but I’ve always hoped to locate a copy of the film. It’s a complete long shot, but if anyone manages to track down any memorabilia or an actual copy of the film, I’d love to get my hands on it!!"

Was there something in particular that you wanted to find out...or see.....?

Since "The Hustler", a movie about pool and Minnesota Fats excited millions around the world, movie makers have been "bugging" the real Fats to make a movie.

Why hasn't he? "Nobody came up with a script I could believe in", said the 278 pound living legend. "But, 'The Player' was written by a pro....a pool man...he really tells it like it is in the world of pool. Its the greatest pool movie ever made"

"The Player", says Fats, the world's most famous pool hustler who claims 60 million fans, "Is truth and realism. Absolutely no trick photography was used...so each shot is authentic. The characters are real too."

Plot and story line is essential in any good motion picture. But "The Player" has vivid characterization...Damon Runyon types that explode on the screen.

"The Player", a Technicolor and Techniscope production opens Dec. 7 with a big Hollywood type mid-west area premiere at the Northwest Plaza Cinema, beginning its regular runs on Dec. 8 at the Northland Cinema, Northwest Plaza Cinema, Mark Twain and Loew's State Theatres. It was produced by International Cinema and is being distributed in the St. Louis and mid-west area by Academy Pictures

Jerry used to be the world's third kite flying champion. He has flown over dry land...a feat from which most professional kite flyers shy away. With no water underneath, you take a big chance.

In his role in "The Player" as Lou Marchesi, Jerry takes some big chances. Like cheating against Minnesota Fats in a game of showdown pool. And like falling for Syliva (Rae Phillips)...a girl who drags him down and then leaves him.

This talented newcomer to the screen holds great promise in his newfound career. Minnesota Fats, who plays himself in "The Player" says, "You'll be seeing a lot of this new Como boy because he's fantastic. He's a dynamic screen newcomer." Fats should know because, according to him, he has 60 million fans, and a person with that many fans knows what it takes to be "fantastic".

"The Player" is Rae Phillips' first picture, but it certainly won't be her last. In "The Player", featuring Minnesota Fats, Rae portrays Sylvia....a beautiful, heartless, phony who takes Lou (Jerry Como) for all he's worth and then drops him.

Her beauty and realistic portrayal of the character indicates that Rae is destined for stardom.

"The Player", however, is not Rae's first appearance before the public. She was Miss Louisiana, second runner-up, a rodeo queen, and she visited Austria and Paris in her capacity as a model.

"The Player"....... [premier dates] ...is a real film. It has everything: romance, pool, emotion, drama. It's the greatest pool movie since "The Hustler", the epic that thrilled millions. ....

But "The Player" has something else. It is jammed with Damon Runyon type characters. Characters like Phil the Peanut Butter Man (Rick Nelson). He's the guy who packs his peanut butter sandwiches with Marijuana. Like Jack Colavita (as himself) , one of the top four billiard players in the whole world. Like One-Pocket Joey (Tom DeMartini) who plays the toughest game in the world. Like the legendary Minnesota Fats who can run a table faster than you can chalk a cue. And like the railbird gamblers, Walsh and Ed...bad news from the word 'go'. ....

Minnesota Fats says, "To write a screenplay like "The Player" you need more than a casual knowledge of the game...a lot more."

De Martini was born and raised in pool country...New Jersey. While New Jersey may be the Garden State, it also has more than its share of pool rooms. Grand and glorious to the rough and grimy, Tom has played them all.

More Credentials? During his years as a top pool player, De Martini has been associated with many world tournaments. He has known, challenged and beaten some of the world's best players.

After knocking around the country in search of a "better game" De Martini decided to go to college where he quickly established himself as the Louisiana State University pool champ. In between studies he took enough time off to venture to the local pool halls to pick up more than enough money for his education.

"The Player" is a story about love, hate, violence, emotion. But mainly its a story about pool...and Tom De Martini knows it like it is...inside and out. .......

Written and directed by Tom De Martini who has been involved in every facet of pool.

Story: Tom brilliantly blends romance and action in his realistic sketch of Lou, a pool hustler, whose character disintegrates through his association with Sylvia who refused to understand or accept his way of life.

In the comments of the link listed above by klone:
http://www.billiardsmovies.com/billi...lliards-movie/
Click to expand...

thanks for the tip. I replied as well

"not bad,for a blind man"

You were exactly the person that I knew would have the answer! Thanks again:thumbup: 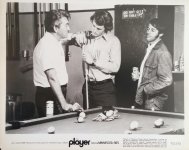