Gold Member
Silver Member
I received an e-mail from a gentleman referred to me by Brad Simpson, asking if Palmer made cues for Gandy.

Here is a link to his hosted pics of the cue:


This is a three point window cue with vinyl "veneers". The veneers are not actually veneers at all, but "L" shaped colored vinyl stacked into a milled groove.

I knew for sure that Palmer didn't make the cues. Palmer used some 4 point ebony and maple vinyl veneered forearms they bought directly from Bob Meucci, but abandoned the idea fearing that the vinyl would not last (it did).

Because of the vinyl veneers, and also because of what I had been told by some in the industry, I was under the impression that National made the cues for Gandy, which I had heard, using WICO forearms suplied by Bob Meucci.

Anyway I decided to run down this idea, but looking at the cue, it looked like a Viking to me, so I wrote Viking.

So, just for the record, Barry Hart said that Viking made cues for Gandy for about 10 years. My assumption is that most of the cues were made in the 1970's.

If anyone knows anything about this connection, or would like to add to the information, please feel free.

Gold Member
Silver Member
Just want to add that Ricco Cervantes also worked for Gandy designing and making cues for them in the early 1970's. My assumption is National made their cues before this time, and Viking afterward.

Does anybody else know anything about this operation?

Silver Member
How I always guessed the source of National cues was that the early ones had aluminum inserts in the shafts. Who built them from the afore mentioned group of makers is anyones guess. Sometimes in the 70's they started selling cues with brass inserts which suggests to me, that Viking was the source of the later cues.

I have been interested in National and Gandy for a while now. I have examples of National, Gandy by Cervantes, and Gandy by Viking.

I am always looking for cues and an really interested in more accurate history. I would love to track down more catalogs and brochures. I am especially interested in the early Gandy cues that we see in the known Gandy Ricco Cervantes catalog that has been posted numerous times in these forums and elsewhere.

I have an example of the cue linked in the first post, but in better condition, as well as what I think is an earlier version of the same design by National. Here they are together. The top one is National I believe. The bottom one is Gandy, I believe made by Viking. Both have vinyl veneers. The earlier cue is short four point, the later cue is long three point. I think the earlier forearm was actual "Wico" and the later Viking. I see the two cues as siblings as the design layout of the two is really the same. The later cue has a window and thee points, but the designs really are the same in principle IMHO. 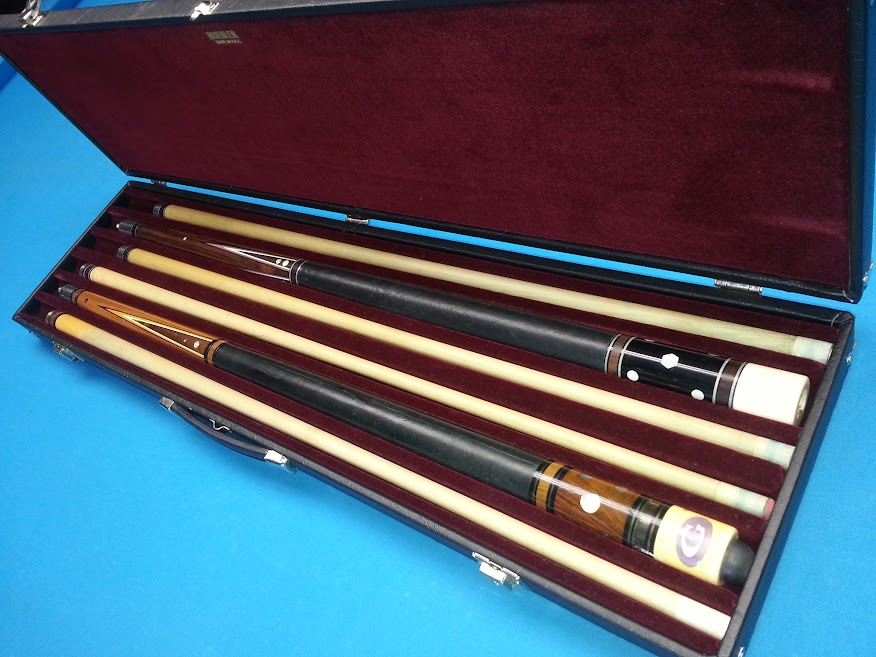 More pics of the top cue, National I believe. 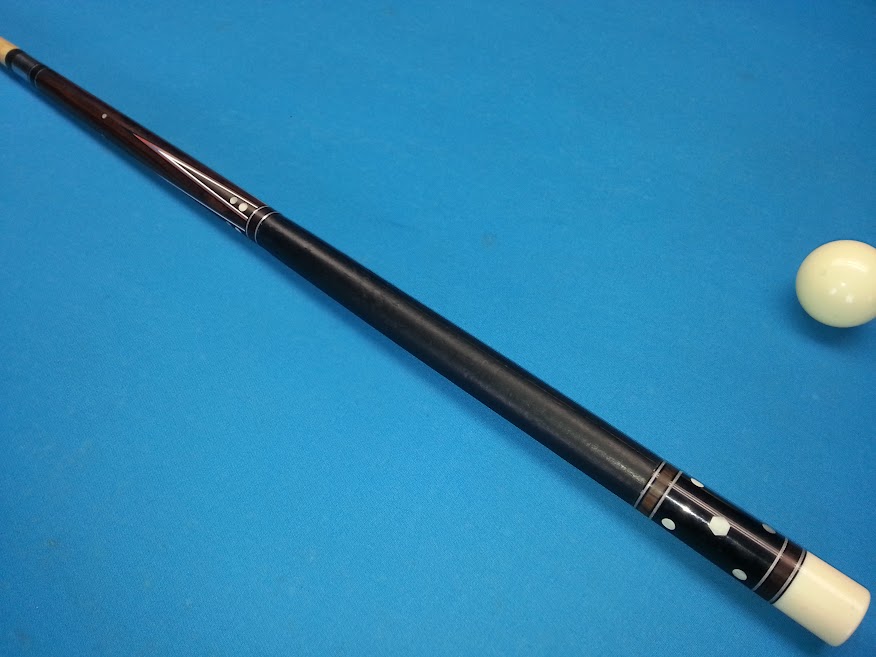 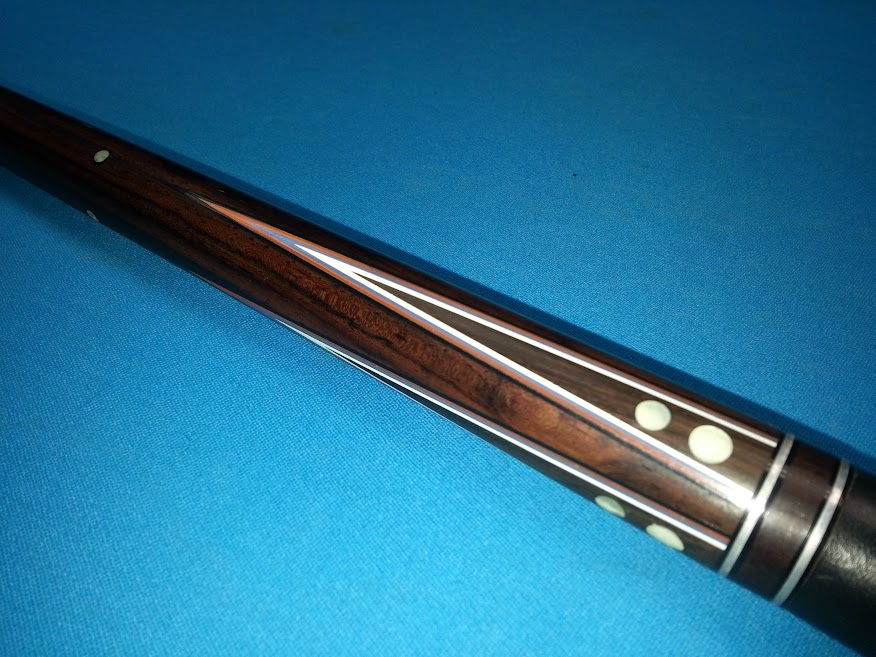 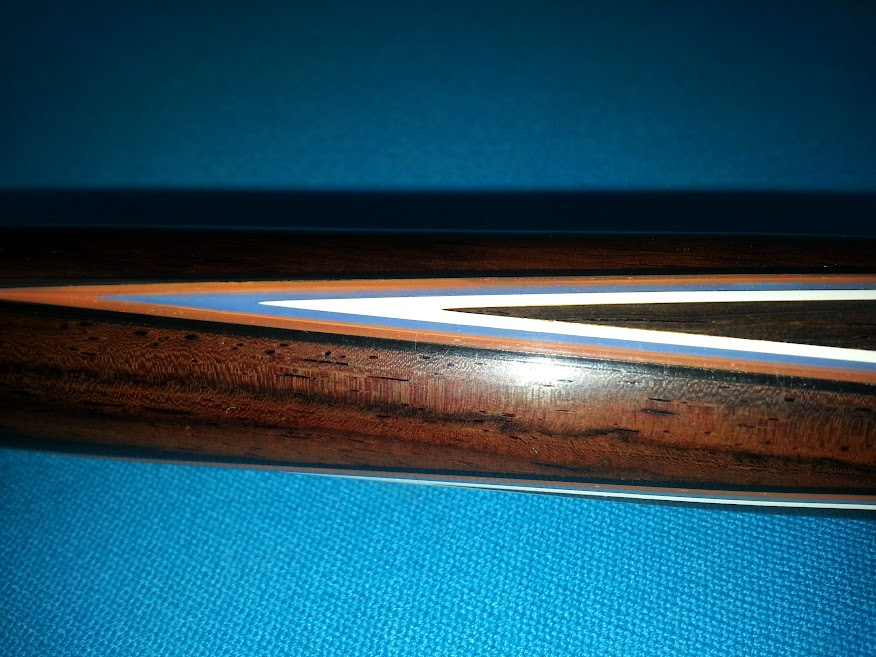 The fourth cue in this picture is a very rare ebony Titlist conversion Gandy by Ricco Cervantes. Identified and dated to 1969 by Dick Abbott. 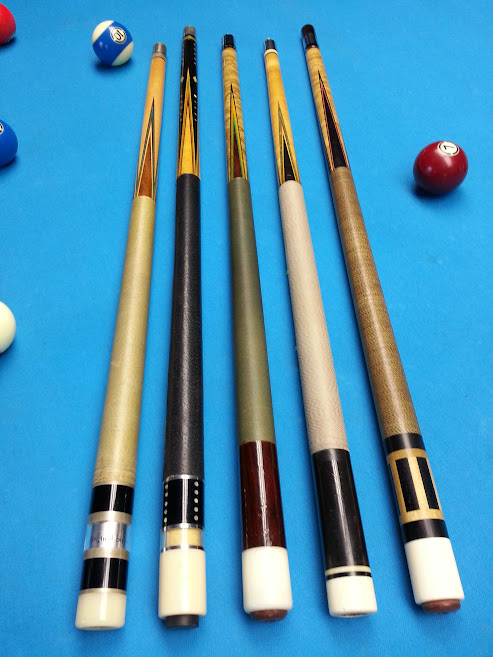 I have others but need to get pics of them.

Anybody have info? I would love to even just see more pics of these cues. :smile:

Here is an RG-1000 I bought off an AZB member. I am grateful he looked me up on this cue and offered me a nice deal. This is likely a Viking made cue I think. His pics. 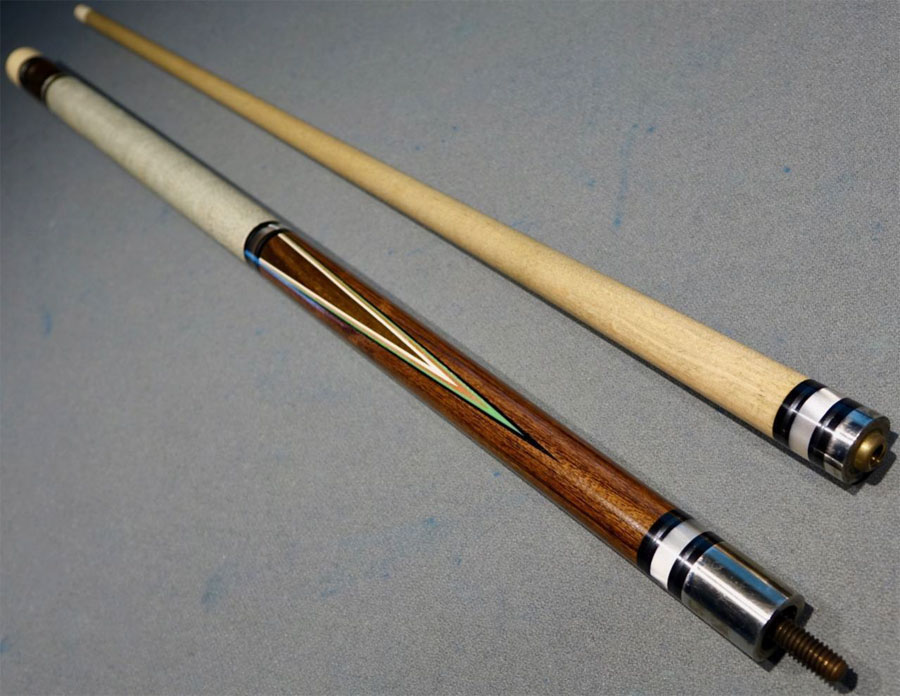 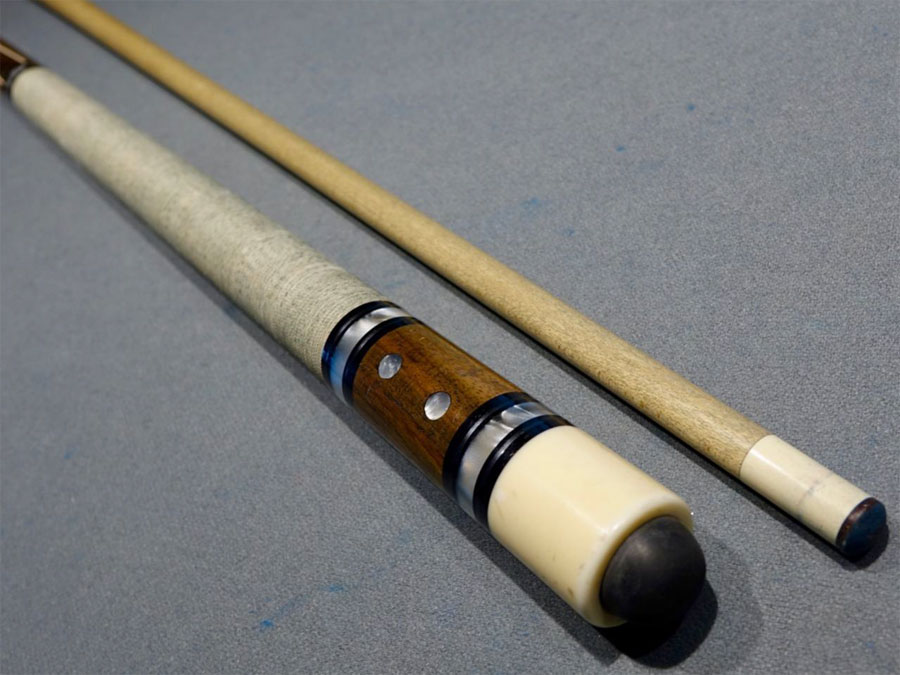 Silver Member
Nothing yet?

I'll add pics for a bump.

Gold Member
Silver Member
Gordon Hart once told me that he would not even sell a joint screw anymore as he had gotten out of the cue parts business. He went on to say he used to have a catalog and sold cue parts to cuemakers all over the place. I really feel this lost link would explain a lot of the vinyl point cues and clear windows that were so popular in the 70s among other brands. Bob Meucci told me he gave the plastic point system to Gordon when he decided to quit making them. So from what Bob and Gordon told me I am assuming Gordon expanded the cue parts business for a unknown period of time. I would love to see the catalog Gordon mentioned.

cueman said:
Gordon Hart once told me that he would not even sell a joint screw anymore as he had gotten out of the cue parts business. He went on to say he used to have a catalog and sold cue parts to cuemakers all over the place. I really feel this lost link would explain a lot of the vinyl point cues and clear windows that were so popular in the 70s among other brands. Bob Meucci told me he gave the plastic point system to Gordon when he decided to quit making them. So from what Bob and Gordon told me I am assuming Gordon expanded the cue parts business for a unknown period of time. I would love to see the catalog Gordon mentioned.
Click to expand...

I agree. That catalog would be a great find. I would love to know some dates on when who made what as far as these Gandy cues are concerned.

Viking did go on to make a lot of cues for different brands, as we see with Gandy. I am guess than is after they put the breaks on selling the parts.

They made a line of Lou Butera cues in the 80's, and they made some of the Excalibur cues, among numerous others. That's according to Viking recently.

I think few currently realize or remember it was a Viking that made Excalibur cues as many of the Excalibur cues were low end Asian imports and I think many just assume they all are.

I have a Viking Lou Butera cue with 9 vinyl veneers, the only one I know of with more is a Viking model with 11 vinyl veneers. I talked to Viking and they can't find the records of these old non-Viking branded cues. Same with what they did for Gandy. No records.

As for the vinyl points, I have both three point and four point Gandy vinyl veneer cues.

I posted a close up above of one of them that I actually think is a National, not a Gandy. They are white/blue/orange(red?)/black. Four points.

The RG-1000 I have is three points. White/orange/green/black. 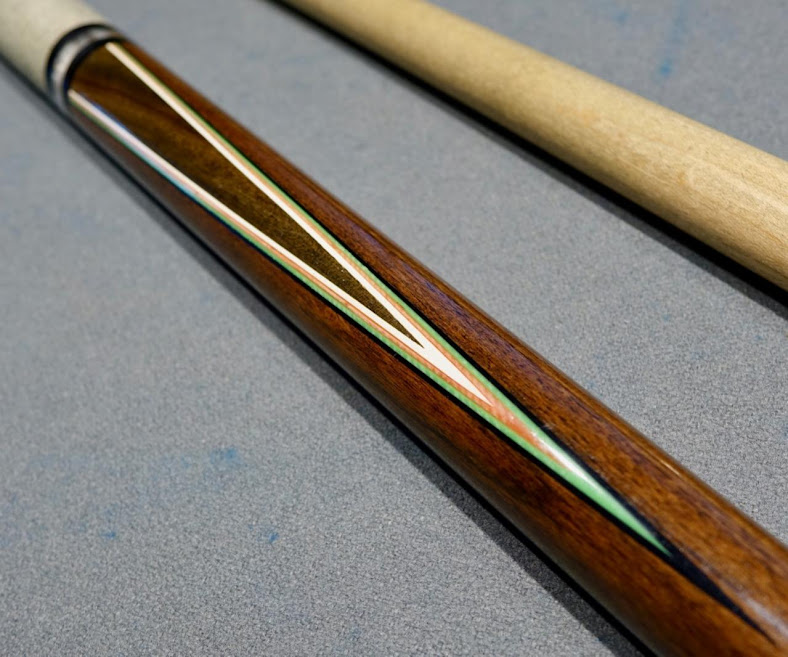 I also have picked up a few Gandy's over the years. I have one from the Ricco era and the rest are most likely made with Viking parts or directly by Viking..

Silver Member
Great. Thanks for posting. I have seen your pics before and enjoy seeing them again.

That early one has the aluminum pin, right?

But it is the gallery, so I'll bump with more pictures. Again, sorry for the quality.

The first is a 1987 Gandy HC120 purchased from the original owner. It still has the model sticker on the other side, not in this picture. Condition is nearly new.


The HC-110 was BRW and the HC-120 was BEM, that's the only difference originally, but as they evolved details changed while the woods remained consistent to the original models. I have an early HC-110 as well, with the aluminum insert. So I have evidence of the same model numbers stretching from about 1969 to at least 1987. 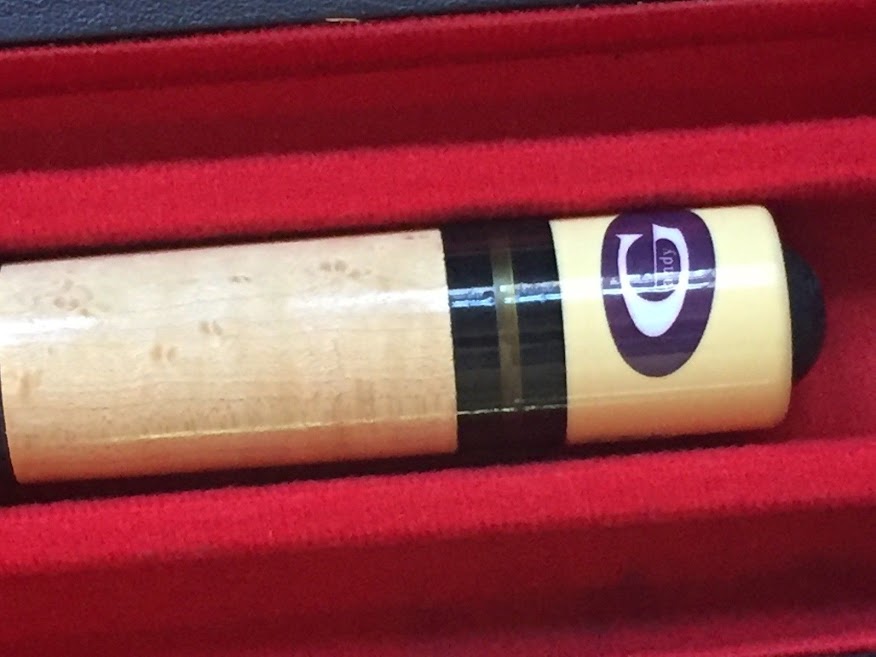 This is an early HC-110. I have two original shafts in nice shape. Obviously needs a re-wrap and a finish, but cue is sound and straight. 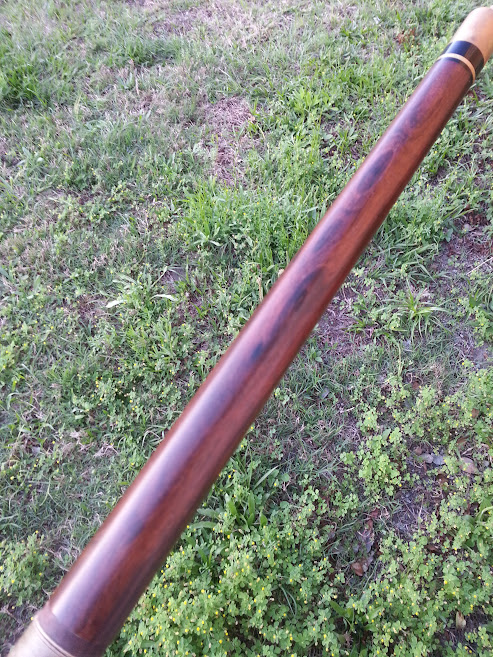 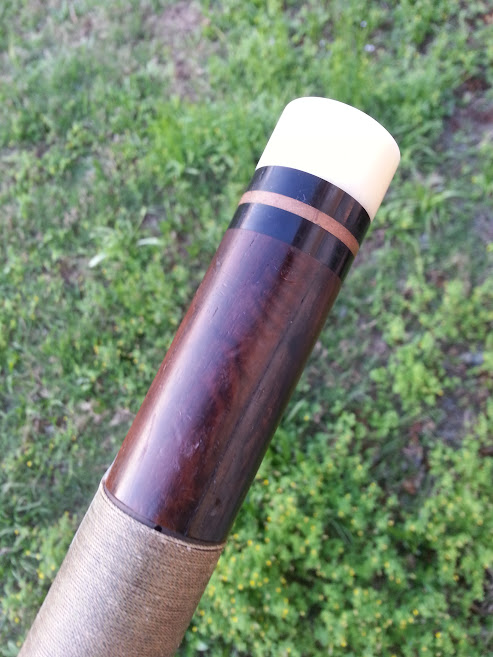 The earlier cue has what looks like brass rings in the joint, maybe copper, that match the one above the butt cap...we'll see how they look polished up, the joint collar is brass and the pin 5/16x18.

The later cue from 1987 has white rings in the joint. It has a white joint collar and 3/8x10 pin. Interestingly it retains the metal ring above the butt cap that is consistent with the original model long ago.

Just some interesting observations of the evolution of construction and design over a couple of decades.