Just for your information. 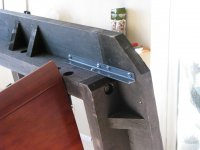 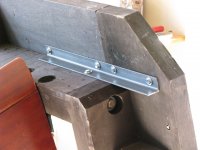 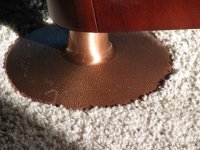 In this picture you can see I used a round cut piece of 3/8"ths plywood to drive 1 1/4" roofing nails through to give me the clearance over the carpeting that I wanted. It also allowed me to raise the playing surface of the table by 1 1/4" inch as well, to 30 1/4" overall. 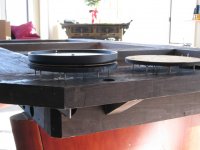 Now in this picture, you can see the foot of the table is well above the level of the carpeting, and yet the carpeting is not being smashed down either. This table could be moved at a later date, and you'd never know a table had ever been setting on the carpeting for years because there would never be any signs of it in the carpet from sitting there. 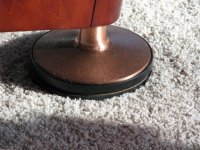 Taught 'em all I know

Silver Member
Glen, you are a rock star!

There's a new hall in my neck of the woods. Opened in December. I think there's 14 GCIV's. I brought your initial report of design flaw to his attention last week. He had already experienced the "droop", called on the original company that set it up, went round and round with them, no fix, hard feelings, and has since hired another mechanic.

This guy did something (lag bolts and ?, I didn't pay much attn) to correct it, although 2 tables apparently still roll off a bit. He's going to bring your information to his mechanic to ensure his investment is being properly taken care of. I am passing this latest info on.

Now if only all entities of this industry were as on the ball and forthright as you, then it would be on CBS live weekly, pro's would cash million dollar checks, sponsors would rush the gates, and even the ugliest players would get 4 star nookie!!!

Silver Member
I've got something comming for the pool playing world too, when I'm ready to release that information...I guarantee it'll rock this industry world wide

stop yelling at me

Taught 'em all I know

realkingcobra said:
I've got something comming for the pool playing world too, when I'm ready to release that information...I guarantee it'll rock this industry world wide

Did you invent the adjustable pocket Glen?


I may be on the right track.... just not sure to where

Silver Member
We have a place in Phoenix called Metro Sports Bar, they have been having fits with their GC IV's, and they are on the Second Expert from Brunswick trying to make their tables right.

CocoboloCowboy said:
We have a place in Phoenix called Metro Sports Bar, they have been having fits with their GC IV's, and they are on the Second Expert from Brunswick trying to make their tables right.
Click to expand...

Silver Member
I just figured I'd make a post that would at least pertain to all GC4 owners as to how to fix the frame problem permanently, as I know this is a common problem on all GC4's. I cut a 6' piece of 1 1/4" angle iron into 16" lenths and drilled each piece as you see in the pictures. Then mounted it with 1/4" x 1 1/4" lag screws. And to give ideas to home owners with a pool table, or a table on the way, and how to avoid the compressed dents in their thick carpeting/padding as I know quite a few homes have tables on carpeting like this carpet is in the pictures.


CocoboloCowboy said:
We have a place in Phoenix called Metro Sports Bar, they have been having fits with their GC IV's, and they are on the Second Expert from Brunswick trying to make their tables right.
Click to expand...

I have played on those table and this is the very problem they have. Maybe Glen can stop in and fix it for them.

He's not the cheapest, but his work is 1st rate, as you can see.

So this sagging problem only exists on GC IV's then ?

fsarfino said:
So this sagging problem only exists on GC IV's then ?
Click to expand...

Well, no....GC1's 2's and 3's have their own problems, but different than the 4's. The GC5's have no issues with the frame design that I'm aware of, as it's the best designed frame I've ever seen on a Brunswick.

How do those "feet" hold up to leaning on the table? Seems like the roofing nails, not being exact lengths, would create some leveling issues.

realkingcobra said:
I've got something comming for the pool playing world too, when I'm ready to release that information...I guarantee it'll rock this industry world wide

yes folks he is on to something big, I see more biz plans than JA does pool balls and 99.99999343% are junk or a weak attempt at gettong me to invest. What Glen has is the BEST idea I have seen in forever, it has nothing to do wit hthe foot thing here.

Glen is a greast person, a bit eccentric in a good way and thats why he is what he is, a innovator. a artest. no i'm not kissing ass, i dont need to or want to, its a complememt to him. Some of the time he gets ahead of himself but thats just passion, were going to make things happen-we already have for that matter.


At some point i'm going to need everyone who who has done biz with Glen to write/email me a short letter about their opinion of his innovitations and why or why not they are good or bad. the more i have the better. My goal is to make Glen $$$ for his retirement as his back cant take moving slates in snow forever, if he slipped and fell on that last job game over and I know a bit about back probs. Will I make $$??? yeah maybe and I will dump it back into pool an the promoting of pool. I done mind to keep open books on my side of the deal, As for Glen's $$ thats his biz. Why would I like to make a guy $$$??? youu might ask, I have changed-I did some bad stuff as Hu reminded us the other day and while I cant un-do the harm of the past I can do good deeds in the future. So thanks Hu for the friendly reminder-keeps me in check. No I'm not a sucker or soft looking to make everyone $$$, I chose Glen because he brought something to the table I believe I can make work-its not a guarantee, but i'm going to do my best.
Last edited: Feb 26, 2009
F

when i had installed by Ernest the first time it was perfect and played perfect for 7 years, no rolls. Ernesto did a PERFECT job and is a great friend and table guy and I recommend him to anyone!!!

i took the table down and it sat in a climate controlled storage, properly packed for around 3 years.


Glen comes to town and set it up, had Glen not been here, Ernesto would have done the work. not knocking Glen, Ernesto was in the PI or something so Glen got the job. Point is they are both great, think I said that before. back to my thing here. Glen sets up the table with 860HR and it was PERFECT for the first 2-3 weeks and then we noticed a ball picking up speed playing 1P, it was on the foot end of the table it should have stopped 12"-14" short of the hole It was approaching at a 45 degree angle, by the time it got to the hole it was rolling faster. Over the next 2 weeks it got worse on both ends of the table. We ouldnt figure it out. Table settle and rolls happen woth climate changes but this box has been here 10 years!!!


I come in after Glen has the slates off and he said "look at this" the long rail of the frame-that board dosent run the whole length the short rail cuts it off from rnning the whole length of the frame(sorry for the poor description here im in a hurry) What ends up happening is the 2 wood triangles on the head and foot of the frame hold up the end of the table, the slate bolts are dependant on those triangles as they hold up the slate bolts, the metal extensions that Glen put in solve the problem 100%. The Gold Crown 5 has addressed this by making the long rail frame board run the length of the frame, we will get pics of both to show the difference, later.


i believe the reason it played perfect for all those years is the table was set up and acclimitazed to the dry air and "fell into place just right" when we moved it the wood triangles had shrank up a bit and were not as big so they wernt able to support the whole end of the table. Its a disaster for sure-a VERY bad design flaw. Easily fixed. point is ANYONE installing a GC4 or similar frame MUST put the angle iron in there.


were going to get pics from 1,2,3,4,5 and Centannial's I have all tables and want to see the frames for each. But the frame on the 5 is MUCH better than the 4, the Centennial is good too.

How do those "feet" hold up to leaning on the table? Seems like the roofing nails, not being exact lengths, would create some leveling issues.

Naaa, the nails are all the same 1 1/4" lengths, and they all pass though the carpet/padding perfectly. The table is as stable as it wood be setting on a wood floor, it all depends on how many nails you nail into the plywood, for sure 10 nails won't be as stable as 20 or 30 nails:grin:

Silver Member
You took that "feet" idea right out of my head! I thought about that a few years ago and always wondered why that wasn't done on carpet.

I will admit your roofing nail solution is much more simple than the way I was thinking of doing it.

md5key said:
You took that "feet" idea right out of my head! I thought about that a few years ago and always wondered why that wasn't done on carpet.

I will admit your roofing nail solution is much more simple than the way I was thinking of doing it.
Click to expand...

The GC4 in the pictures with the frame and carpet mods is mine. It has been close to a year now since the table was set up and I have had no setup related problems whatsoever. These mods are solid and they work. Period.

Re: Glen not being the cheapest...I can't imagine anyone else even thinking about collecting this table in Las Vegas, making sure all the parts were there, converting it from gulley to drop, trucking it in winter 650 miles to my home in Colorado at 8250' elevation, doing the mods, buying and installing new Simonis 860, blueprinting the table, doing a dead triple nutz perfect job and gauranteeing it...for anything near what I paid Glen.

In my book Glen is the "Michaelangelo of Mechanics". Thanks for making an awesome table the BEST!