JolietJames said:
How much does predator pay to get them to use that abortion of a ball set?
I'm sick of that 4ball-colored 5 ball.
I'd like to set up a GoFundMe to raise the same amount of money to pay them to use a non-tarded ball set.
The cloth is stupid too imo.
Still fun to watch.
Click to expand...

Those aren’t the Predator balls. It’s the Aramith Black set. They are terrible. The Predator Arcos have standard colors.
B

Albin up to break, makes a ball in the side pocket with an open shot on the 1, though the 2 is tied up and requires good position play from Kaci. He gets there for the shot on the 2, cue ball on the rail, only option seemingly is to slow roll it forward to leave a long shot on the 3. He instead plays top and goes two rails for position on the 3. Only issue is the 4 ball on the rail near the side pocket, and after a good shot by Kaci, looks like a runout for Europe if Albin can shoot the 4 straight down the rail past the side pocket. He makes it, Kaci down on the 5, leaves Albin relatively straight on the 6. And we get our first warning from the ref to the crowd—who had the under 2 completed matches for that?

Silver Member
BTW, Here is the strong jump shot Styer made in rack one (pic only): 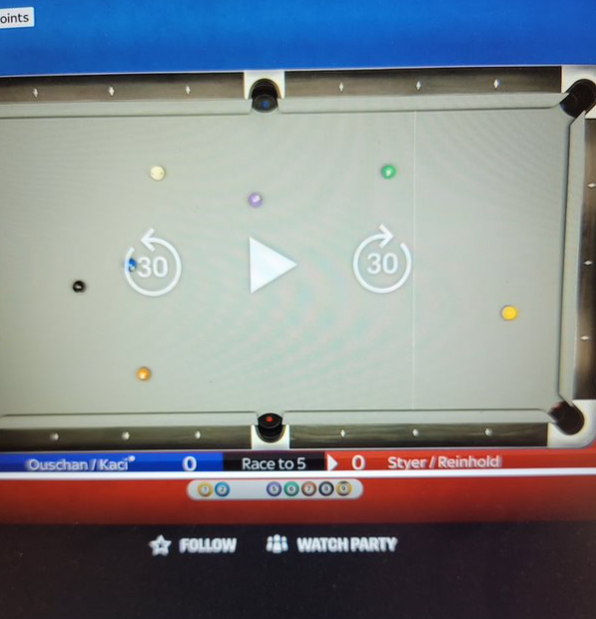 Followed immediately by this miss on the 2 in the side from reinhold: 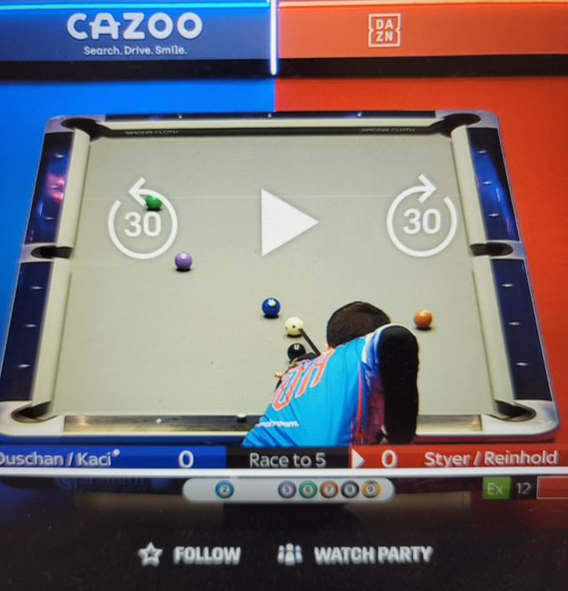 Silver Member
Sorry for the play icons, just trying to give those that can't watch a sense of what's going on...

Both are thinking of something but I don't know what.........any1 got caption for this one? they also look kind of sad.
Click to expand...

"I wish Earl was here"
B

jokrswylde said:
BTW, Here is the strong jump shot Styer made in rack one (pic only):
View attachment 619011

Followed immediately by this miss on the 2 in the side from reinhold:

Styer came to play today. Unfortunately, his partner Reinhold looks like an APA 6 out there. That 2 wasn’t easy but on the biggest stage in pool it’s a shot you have to make. Styer needs more help here to overcome the talent disparity against the world-class pairing of Albin and Kaci.

mikeyfrost said:
I had to so it through the Google play store. I think they're sick of us using them for 2 or 3 months. I'm thinking about keeping it this time.
Click to expand...

Thanks for tip. I used the DAZN app on my phone and it worked.

Both are thinking of something but I don't know what.........any1 got caption for this one? they also look kind of sad.
Click to expand...

"Why couldn't they have just let earl play"...

Silver Member
Styer pushes out to a straight in shot on the one...

Silver Member
Kaci leaves oushan a tough shot and he misses. US gonna knot this one up at 2!
B

Reinhold breaks, balls seem to be congregating at the bottom end of the table on a lot of these breaks, and we see that here. Poor push out by Styer, and Europes happily take their turn on the easy 1 in the corner towards a 2 shot in the side. Albin slides it down to the end rail for the 3 ball and Kaci navigates the cue ball through a cluster of balls for position on the 4. 6 is hanging in the pocket and only semi difficult shot left is the 7 ball.

Albin stuck with the cue ball on the rail for a shot on the 7 into the opposite bottom corner…and he misses! Great opportunity for USA to steal a win. Reinhold makes the 7 but displays zero confidence in his cue control, leaving a long shot on the 8 for Styer. Luckily it’s a straight end stop shot and USA takes care of business. 2-2
B

And if you had Margaret over Pia on first significant other to be mentioned by commentators, you win!
O

Silver Member
I like the jerseys for USA this year: 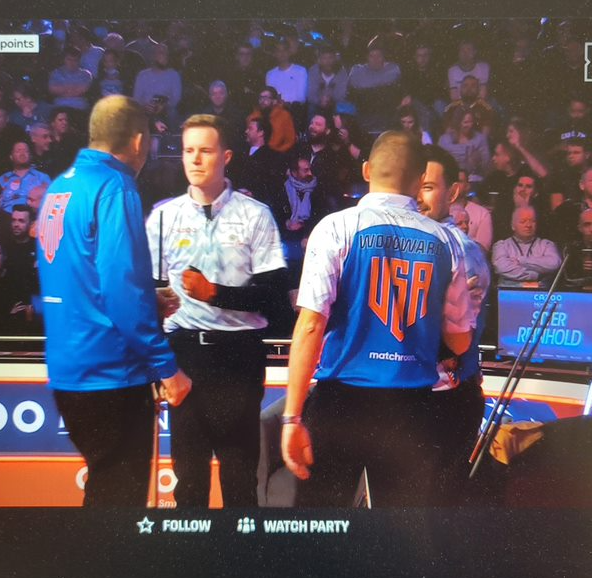 And the shark cloth is really growing on me...
B

Kaci dry breaks, looking very shaky out there thus far, reminiscent of his first MC appearance. Styer with a blind cut on the 1, gets Reinhold close to his work on the 2. Best shot by Chris thus far to make contact on the 3 and push it towards the open side pocket. Styer makes the pot and slides the ball three rails through a window of balls towards the corner shot on the 4. Open table now and should be an easy runout for USA, and they get it done after an impeccable shot by Styer on the 7 to get position on the 8 in the side. USA with the advantage, 3-2.

Silver Member
Thanks for the play by play guys. Much better than I can offer!

Silver Member
Chris and Tyler up 3-2 over Albin-Klenti. This might go 11-0 USA.

Silver Member
Fans are giving the 'BOOOORING" shout to both teams following a push out!
S

jokrswylde said:
Fans are giving the 'BOOOORING" shout to both teams following a push out!
Click to expand...