My Trip to ChrisinNC' Place

ChrisinNC said:
When he told me he was headed to a bike race in South Carolina, I asked him if he was a better biker or pool player? He said probably pool player, but it was close. Based on his calves (he was wearing shorts) I figured he had to be a competitive level biker as well!
Click to expand...

There was a day I might have been fast, but it was long ago.

Black-Balled said:
Hahaha. Many experiments involving intoxication have been made historically!

The ride I did had a party group who yelled and drank and jeered and cheered, and a race group that like I, only had a beer or 3 during the race.
Click to expand...

Party group, who would’ve known.? One time we rode our bikes to downtown Dunedin to have a few beers. We thought we were being responsible since we didn’t drive. When we got pulled over on the way back because one of us didn’t have a light I almost got a dang dui. On a bike for Christ’s sake! But he lets us go thank god.

Silver Member
Party stop at a brewery...check out the upgraded Smart car. They call it Socartes.

other pic is where the party group paused for a race stage in the woods. 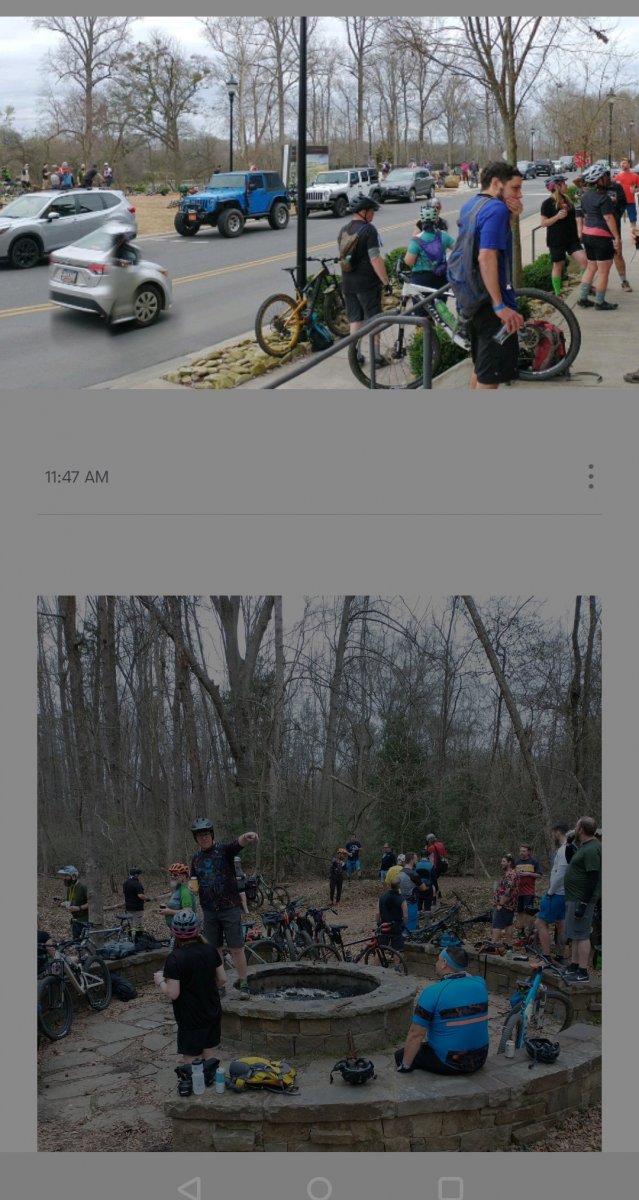 Black-Balled said:
Only my dogs think more of me.

And the first pool room was a 4 hr detour, plus playing time (well worth it).

Silver Member
BB your my hero. Drinks a few, takes top 3 in a cycle race, then wins the tournament. With a good family to boot! You got it all my man.

Black-Balled said:
How about the rest of the weekend, ya say?

After leaving Chris' spot, drive to buddy's house and got there late and had to chug a few brews to get to sleep. Went to bed around 3 and got up at 7 for bike race. Not to be attempted by amateurs.

Got to the race with -1 minute to spare but the gang waited for me and friend to put funny pants on. We each had our own pants, for the record.

It was a very cool ride in a town in SC (rock hill?) and the group ride to trails, did a mini race, rode to other trails and did another mini race and repeated that for 5 stages in various areas around town. Fine times were had by many and there were many beers consumed- I only had 2 all day but my buddy had 10+. I did have whiskey before 10 am, if that counts.

So, points were awarded for the top finishers each stage and at the end of the day, I was 3rd overall. Entry was free and the prize was nothing! We did finish at a cool restaurant and I had a chicken and waffle sandwich that was awesome. I should have ordered 2 though.

The Tesla drive us home and that was bizarre. My buddy suggested I drive and I passed. Good thing too coz there was more passed too. After riding all day and 2 beers with dinner...I fell asleep like 3x on the way home and it was it a 50min drive.

Got up the next day and split to hit a tournament on the way home. I won that for a couple hundred+.

Had a good dinner in a restaurant solo after and missed my girls pretty bad, watching the other families. Hit the road and home by 11:30...with more money than I left with.

Some people have all the fun. Damn! I think Break Time was one of my good buddies Frank Tullos' place for many years. Correct me if I am wrong about that. Frank was a helluva player!
T

Silver Member
Different Break Time. Frank didn’t have anything to do with the Raleigh Break Time. He owned the ones in Winston-Salem, Greensboro and Wilmington. Eventually selling his ownership in them.

crazysnake said:
Where's this at?

Sent from my motorola one zoom using Tapatalk
Click to expand...

Looks like a place I've played in Foscoe, NC. Great room, tables are maintained to perfection.