brought to my attention from a friend in the area

Gold Member
Silver Member
Are all/most of those 10-foot tables?


The cosmos in the bottom corner first pic might be 10ft
But looking at the 3rd pic you see it at the end and it looks smaller than the pool table
Last edited: Aug 8, 2018
M

Silver Member
all those carom tables ! Is that really a room in the USA ??? lol

Gold Member
Silver Member
Do you have an address? I did a google search for “hat nang billiard Atlanta” and no relevant hits.

Texas Carom Club said:
He sent me this map with only coordinates
Thats all i got hope this helps
Click to expand...

That would put it in the Pleasant Hill Plaza Mall in Duluth, GA near the intersection of I-85 and Pleasant Hill Road. Maybe near the new Vietnamese restaurant.

The US Nationals were held in Chamblee/Tucker just south west of there back around 1995??? I think that room lasted only a couple of years.

Gold Member
Silver Member
Thank you. I might check it out.
K

Silver Member
Did a bit of online sleuthing and found a business registered in Jan. 2018 as HAT NANG located at 1630 PLEASANT HILL ROAD STE 100A, DULUTH, GA. which matches with the OP’s map screenshot.

Go check it out, Atlanta folks!

klone said:
Did a bit of online sleuthing and found a business registered in Jan. 2018 as HAT NANG located at 1630 PLEASANT HILL ROAD STE 100A, DULUTH, GA. which matches with the OP’s map screenshot.

Go check it out, Atlanta folks!
Click to expand...

Thats very helpful of you
Thank you
D

Wish that place had been around in the 70s. Back then the only place to play 3 Cushion was the Georgia Tech Student Center. Off course that is where i spent a good time of my undergraduate days. :wink:

Gold Member
Silver Member
I was able to make it out here tonight. The address posted earlier is correct: 1630 PLEASANT HILL ROAD STE 100A, DULUTH, GA

I got there late, about 10:00 PM Monday night. There were two tables going. One guy was practicing on his own, and he told me not to play on the table I was about to go on, he said its not good (The Cosmos). So I used that opportunity to ask if I could play a game with him. He said sure. He was playing free ball (if I understood him correctly, we had a slight language barrier), which means no rails required. I asked if we could play 3 cushion. He said yes. He went back to the counter and got the measels set of balls. The ones he had before were the non-measles set. IDK if they save the measles for 3C? Or maybe since it was obvious it was my first time there, he wanted me to have the better set.


I asked him about the tables, he said they are all 9', and none of them were heated. He had just watched the McCreary tournament, so we had that in common. I asked if the place was mostly Korean, he said no, Vietnamese. He said the prime time is the morning and afternoon, and if you go during that time, you can find someone to play you any game, either "free ball" or 3 cushion.


We played about half an hour of 3 cushion, and I held my own. I then asked him to play the free ball game, as I never played it before. He quickly ran an 18 on me, then a couple of more teens. ha ha. I asked if he was low, medium, or high skill level in this room. He said at that game, he is the best, and has a run of 200. I had a great time, and we stayed until closing. The staff did not charge me, and I told them I'd be back.

I think there were 7 carom table, and one pocket billiard table. All of the tables had a small whiteboard, marker, and eraser to keep score. There was also a small tray for master chalk on each table area. I didn't take a lot of pictures as I did not want to seem obnoxious, ha ha. 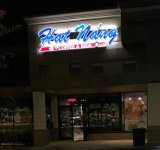 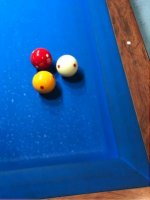 its called free game aka straight rail, and some also call it libre fyi

here is a caudron video showing how you want to play it
https://www.youtube.com/watch?v=r-sJiAjnUaE


the dotted balls lol some how this myth got around that cant play 3c on old style balls, when ceulemans won all of his 3c titles on the regular de lux set, unreal! explain that lol

even bert himself said on the stream that the dotts are purely for the audience to see the spin, ohhh ahhhh

very happy you played straight rail its a real fun challenge, some times not so fun

net time try to get him or someone playing 1 cushion with you,


a 200 high run isnt really a super high level player, a really good one will have a run of 600 or so and can run out the game in a single turn, get them to the rail and nurse the 400 points or however many in a single inning
my buddy who sent me those photos has played 5-600 in a inning, and a high of 70 something 1 cushion
Last edited: Aug 21, 2018

Silver Member
In my experience, the free games are played with a larger ball set that the 3c set...so I'd surmise the trade in sets was due to that.

Not that they dont make non-spotted of the 3c size.

some time they use the r w y set in balkline, sometimes the de lux

they are just carom ball sets,

its all the same, just a marketing tool

but i suppose its also a style thing too, want to play with what you see your favorite players playing with
i like the de lux
Classic ,simple,cheap, like my cue