jalapus logan said:
You are correct. I'll never move my table ever again...heavy as hell. During a tornado, I'll hide under my diamond for safety.
Click to expand...

Thats funny, I told my wife we have to lay on top of my table to protect it during tornado warnings.
G

jalapus logan said:
The answer to that is everyone who shops at Walmart, orders from Amazon, etc etc etc.
Click to expand...

On a lot of day-to-day items you really have no choice but to by Chinese stuff. On a pool table you do.

be all. and supports it to

garczar said:
On a lot of day-to-day items you really have no choice but to by Chinese stuff. On a pool table you do.
Click to expand...

LWD said:
I love Diamond tables, and wish I could afford one for my home table (I have an older Connelly—which is fine). And I have never had the opportunity to play on a Rasson table. HOWEVER . . . I am starting to wonder whether Diamond is the best of the past but Rasson may be the best of the future.

Diamond has, IMO, perfected the traditional wood-based pool table. But just as carbon fiber shafts are an innovation that is taking pool tech beyond its wood traditions (wood dead-heads notwithstanding) it is looking to me that maybe Rasson is doing the same thing with table tech. Their use of an aluminum subframe strikes me as an important innovation. And while Diamond’s shim-based leveling system has been the state of the art for several years now, Rasson’s leveling system strikes me as more modern and sophisticated and more likely to remain reliable longer.

Not sure, but I am starting to think Rasson is the new technology leader in pool tables.View attachment 577052
Click to expand...

LWD said:
You are right - Rasson has changed pool table leveling technology. I have a new 9 ft Rasson Victory II and I am in pool player heaven. I have been playing for over 50 years so I have played on every table you can think of and this is the best table I have ever played on. Diamond make great tables and for playability they are almost as good as the Rasson. However, for new technology, quality of materials and quality of construction Rasson is the best. And when it comes to looks the Diamond looks like a cheap entry level table and the Rasson tables look amazing. I have owned 3 Brunswick tables over the years and never thought I would own a table made in China but it is simply the best pro table in the world. I have had some of the top local players play on my table and they have all agreed. Just wanted to give an honest review from someone who owns a Rasson. I have attached some photos of my man cave.
Click to expand...

Gold Member
Diamonds are awesome, majestic almost, really look and feel like a tank
fair to say though, they could use some updates, website too

Silver Member
I'm not an american (nor Chinese) so I have no nationalistic stake in this game (though I do dislike supporting the oppressive Chinese Goverment). To be honest I'm not a fan of how either table plays. The Diamonds I have played on have, for lack of better words, a sort of "home table" feel to them. It's the rail shape, I think. Makes them seem lower than they actually are. Now both tables are exceptionally solid from a levelling standpoint, but really, the quality of play on a pool table mostly rest on the rail rubber and the pocket cut. Even a primitive wood shim table can be perfectly level and stay that way from one cloth change to the next.

The Diamonds overall seems to have faster rail rebounds. They both seem to have a very unnatural bounce to them. Pocket cuts I think are better in the Diamonds. I mean, I really hate the Diamond pockets which seems to suck down all slow shots along the rail and reject everything at speed, but the Rassoon pockets are just strange to me. The side pockets are especially weird. I thought the pocket at times rejected good shots, which is always annoying.

Looks like I'll be playing on Diamonds from now on due to changes in my closest venue, so I'll better get used to the idea, but frankly, it's making me want to quit and going back to other cue games. I just can't stand the punting gameplay that is forced by Diamond tables. That's coming from a guy that plays blackball, the puntingest game in the history of billiards. It's just not why I play American pool. When I play straight pool or 8 ball or even 9 ball, I want to stroke the ball now and then. The constant poking and rolling sucks all the fun out of the games.
M 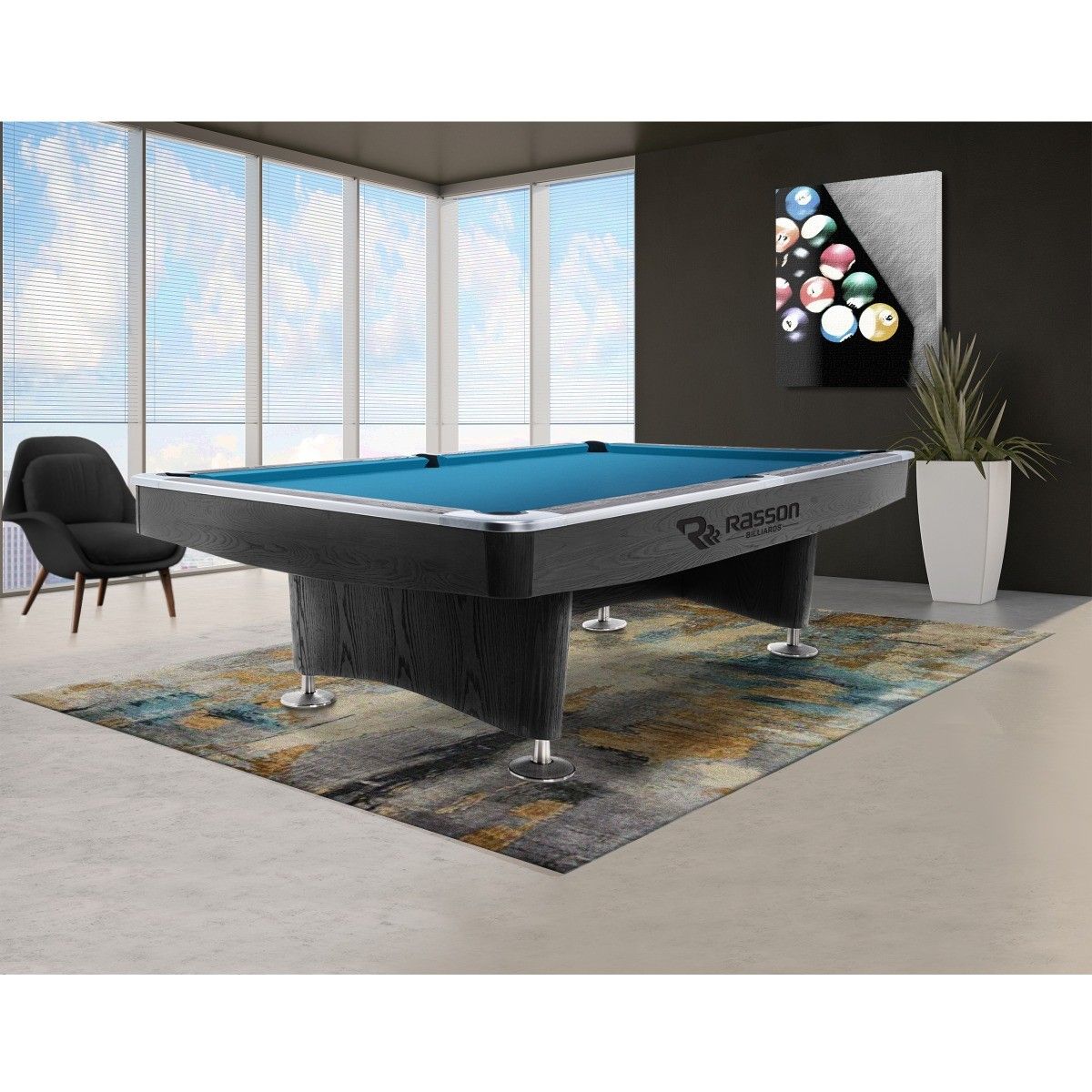 jalapus logan said:
You are correct. I'll never move my table ever again...heavy as hell. During a tornado, I'll hide under my diamond for safety.
Click to expand...

My brother had a friend who did this in Kissimmee FL in 1998. Although it was a bar box, most likely a Valley.

From the Orlando Sentinel:

Ten people were still in the bar on Boggy Creek Road after 1 a.m. when roofing tiles began crashing in the parking lot outside. When the sound stopped, two of the 10 were dead or dying, Osceola County Fire Rescue paramedics said.

"It was just like the movie Twister. It was 'boom' and the glass shattered and it was like a gray mist everywhere," said Ayers Gonzalez, 23, of Buenaventura Lakes. "I dove under the pool table."
Click to expand...

Gold Member
problem at the moment is lack of alternate options
I myself have a Canadian made Black Crown 2, the table has been in production at least 25 years and plays as about as well as anything, half the price of Diamond/Rasson, not the greatest fit and finish but again, excellent playability

back to the topic at hand, I've not known heard of many pros to complain about Diamond playability, pretty much from day one, definetley not the care with Rasson

haystj said:
Put me in the column for Diamond. ✔

I also think Ford is better than Chevy. ✔

Blue is the best color. ✔

You have a few correct

I disagree about the pocket cut - that is why I like the Rasson better. The Diamonds will reject certain shots when hit at speed - even if hit correctly - while it will go in on the Rasson even though they are tight pockets. I think there is a problem with the angle of the corner pockets on the Diamond.

Silver Member
I’ve been playing on rasson tables for the last few months. I like them a lot. They seem easier to play on than a Diamond, even with the same sized pockets. But I have whiffed more than one hanging ball when trying to go rail first on rasson...they can get way up in there.

Maybe if I had a row with a GC, Diamond, and rasson I could tell some real differences, but basically I’m happy with any of those three. I’ve never gotten on one and not thoroughly enjoyed it, but I hang more balls on a Diamond that I do know.

If I worked on tables or had to setup my own that may sway me one way or another.

Not sure which one I’d take brand new for free. Probably a

That is a good looking table. Looks a lot like a Gold Crown. color and finish look sharp.
T

CanadianGuy said:
Diamonds are awesome, majestic almost, really look and feel like a tank
fair to say though, they could use some updates, website too
Click to expand...

They look a lot better in person. In pictures the sawed off corners look like something you would do If you lacked woodworking technique. I'n person, the quality is more visible.

tomatoshooter said:
That is a good looking table. Looks a lot like a Gold Crown. color and finish look sharp.
Click to expand...

So I have been playing occasionally for the past 3 years on a Rasson Ox. The table plays fairly well overall. But I am not a fan of the pocket castings (the tables I play on have sharp edges). The casting to rail fit is just not seamless. Also the rails are showing a lot of wear after just 3 years.

So a good table for sure, but not in the league of the Diamonds.

Silver Member
Rasson is a tough table to play on.

Silver Member
Where does Diamond source their slate from? I think its Brazilian but where is it ground?

dfaulkner said:
I disagree about the pocket cut - that is why I like the Rasson better. The Diamonds will reject certain shots when hit at speed - even if hit correctly - while it will go in on the Rasson even though they are tight pockets. I think there is a problem with the angle of the corner pockets on the Diamond.
Click to expand...

I disagree with your statement, "The Diamonds will reject certain shots when hit at speed - even if hit correctly." I've never had a correctly hit ball, nor seen a correctly hit ball not pocketed on a Diamond. Perhaps you mistake it with Olhausen. It's fine if you prefer Rasson for as the saying goes, you are entitled to your own opinion. The saying goes on to say that you are NOT entitled to your own facts.
Last edited: Feb 19, 2022
M

My poor self would be honored to have an 8ft. from either company! Please feel free to do a home reno TV show at my house and "Max My Man Cave!"

This is gonna hurt

Silver Member
I find the pocket cut on the Rasson "gaffy". Easy when cloth is slick and new but goofy down the rail at pace when worn in. The Diamonds play more "linear". Yes all tables get tougher with age but the Rassons start to play strange and bank SUPER SHORT when warn in. Overall I prefer Diamonds but prefer a Gold Crown for banking.

Also as mentioned the Rassons come with a million pieces of hardware. Think Ikea on steroids.