Exclusive Ronnie O'Sullivan interview: 'I don't want to play in the World Championship next year, it's overrated' :

I wonder why the sponsor or the tour or someone doesn't have a seamstress/tailor drop by the event and make sure all the logos are properly and permanently affixed to the shirts. You often see them coming detached and even falling off.

Silver Member
Sponsors logos on cue cases would be good....kept by their chairs. 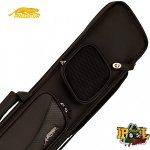 These cases could be adapted to hold three quarter and one piece cues.

The golf bags on the PGA tour use this.

Silver Member
Any chance someone can post the text of the original article? I am at work, and the proxy blocks that page.


ShortBusRuss said:
Any chance someone can post the text of the original article? I am at work, and the proxy blocks that page.
Click to expand...

Staff member
Gold Member
Silver Member
Here's Ronnie in the UK Championship apparently trying for another 146 by refusing an easy play for black.

Sadly he missed the final pink.

I think Barry Hawkins already had his 147 at that point in the event.


Bob Jewett said:
Here's Ronnie in the UK Championship apparently trying for another 146 by refusing an easy play for black.

Sadly he missed the final pink.

I think Barry Hawkins already had his 147 at that point in the event.
Click to expand...

Ronnie rather quiet recently so what has he been saying ?

Pretty much calling out PM Boris 'Bonkers' Johnson for what a fraud he really is but our PM Boris .Bonkers' Johnson is probably good friends with Emperor Barry Hearn so what chance have we got ?

Take my word for it until there is more news on the world of Billiards and Snooker etc I will do my best to fill up the pages ! :wink::grin::thumbup:

Ronnie being Ronnie maybe should'nt have made the post .

Silver Member
“I’d rather play Peter Ebdon over four days at The Crucible!”

Ronnie O'Sullivan says he has "had the best three months" of his life during the coronavirus lockdown.

The 44-year-old made the comments on a day which saw him knocked out of the Championship League event following a 3-0 defeat by Stuart Bingham.

"Talking about snooker and talking about this and that, I want the lockdown to go on for another five years if it can."

The non-ranking tournament at the Marshall Arena in Milton Keynes is being played without fans and, as there is an on-site hotel, players and staff can be contained on the complex without having to leave.

Despite saying he had been enjoying lockdown, he seemed to have a different view of the Championship League venue. He said that he has "struggled" in the "bubble" surrounding it.

"Got to be off my head coming here, haven't I? I've been sat in my room for 24 hours," he told Eurosport during the event.

"I've done 16 hours in a cell once, and it was better because I got to choose my own food."

Bingham needed to beat O'Sullivan 3-0 to top their group and duly did so to eliminate the five-time world champion and make it to the final four-player group.

Ben Woollaston also progressed after a 3-0 win over Liang Wenbo.