Ronnie O'Sullivan is adamant that Judd Trump's bid to dominate snooker won't be decided on how he fares against this generation of green baize icons.
www.eurosport.co.uk

After racing through his opening match at the UK Championship, Ronnie O'Sullivan reflected on the death of Argentina legend Diego Maradona. The Rocket compared Maradona to Muhammad Ali and Ayrton Senna, saying he "had the world in his hands" and was one of the greatest sportsmen of all time. :​

SNOOKER STAR MARK ALLEN HAS PAID HIS RESPECTS TO FOOTBALL LEGEND DIEGO MARADONA. MARADONA DIED AT HOME ON WEDNESDAY FOLLOWING A HEART ATTACK, AFTER BATTLING A SERIES OF HEALTH PROBLEMS. TRIBUTES HAVE FLOODED IN FROM ACROSS THE SPORTING WORLD WITH PELE, RAFAEL NADAL AND RONNIE O’SULLIVAN AMONG THOSE TO SALUTE A FOOTBALL GREAT. :
https://www.eurosport.co.uk/snooker...lute-genius-mark-allen_vid1385476/video.shtml


'ALL I COULD SEE WAS NANDO'S BAGS': RONNIE O'SULLIVAN ON LIFE IN SNOOKER'S MILTON KEYNES BUBBLE​

RONNIE O'SULLIVAN DISCUSSES WHAT IT'S LIKE BEING A PLAYER IN THE BUBBLE AT MILTON KEYNES DURING THE CORONAVIRUS-IMPACTED SEASON. THE ROCKET DROPS IN THAT MANY PLAYERS ARE FAVOURING NANDOS OVER THE HOTEL FOOD!

'All I could see was Nando's bags': Ronnie O'Sullivan on life in snooker's Milton Keynes bubble

Ronnie O'Sullivan discusses what it's like being a player in the bubble at Milton Keynes during the coronavirus-impacted season. The Rocket drops in that many players are favouring Nandos over the hotel food!
www.eurosport.co.uk

UK CHAMPIONSHIP 2020: 'I FEEL LIKE I’M KING OF MY CASTLE' – RONNIE O'SULLIVAN ON EPIC RETURN TO TOP​

A revitalised Ronnie O’Sullivan has found a fresh passion for potting and is performing better than ever in his fourth decade at the snooker summit. The six-times defending world champion tells Desmond Kane how he potted and plotted his return to glory in the year of the pandemic. His year could yet get better as he targets an eighth UK Championship at the Marshall Arena in Milton Keynes. :​

Ronnie 'Rocket' O'Sullivan .
The gift that keeps giving in more ways than one .
I don't know about anyone else but if he's not displaying outrageous talent on the table , he's speaking outrageous comments .

Either way he always makes me smile and there's not a lot else on offer so enjoy him while he's still playing , commentating !

RONNIE O'SULLIVAN ON SHORTLIST FOR BBC SPORTS PERSONALITY OF THE YEAR FOR FIRST TIME :​

Ronnie O'Sullivan and Tyson Fury are on the shortlist of nominees for BBC Sports Personality of the Year, with O'Sullivan nominated for the first time.

Who you do think will win Sports Personality of the Year?
#SPOTY

Who you do think will win Sports Personality of the Year?
#SPOTY
Click to expand...

Good to see Ronnie finally on that list. But the favorite gets paid 40 million a year to drive a car. No wonder taxi cabs in London are so expensive.

Bob Jewett said:
Good to see Ronnie finally on that list. But the favorite gets paid 40 million a year to drive a car. No wonder taxi cabs in London are so expensive.
Click to expand...

You need a lot of money to live in London , the price of a pint is about treble of what it costs here, when the pubs are opened that is . Londoners get a few pounds an hour more that everywhere else but I wouldn't like to live there, way too expensive, I bet a buck Ronnie could afford to live there !

Tyson Fury sent the BBC a message demanding the BBC take him off the list as they had a dispute about five years ago but the BBC never listened to him and kept him on the list : 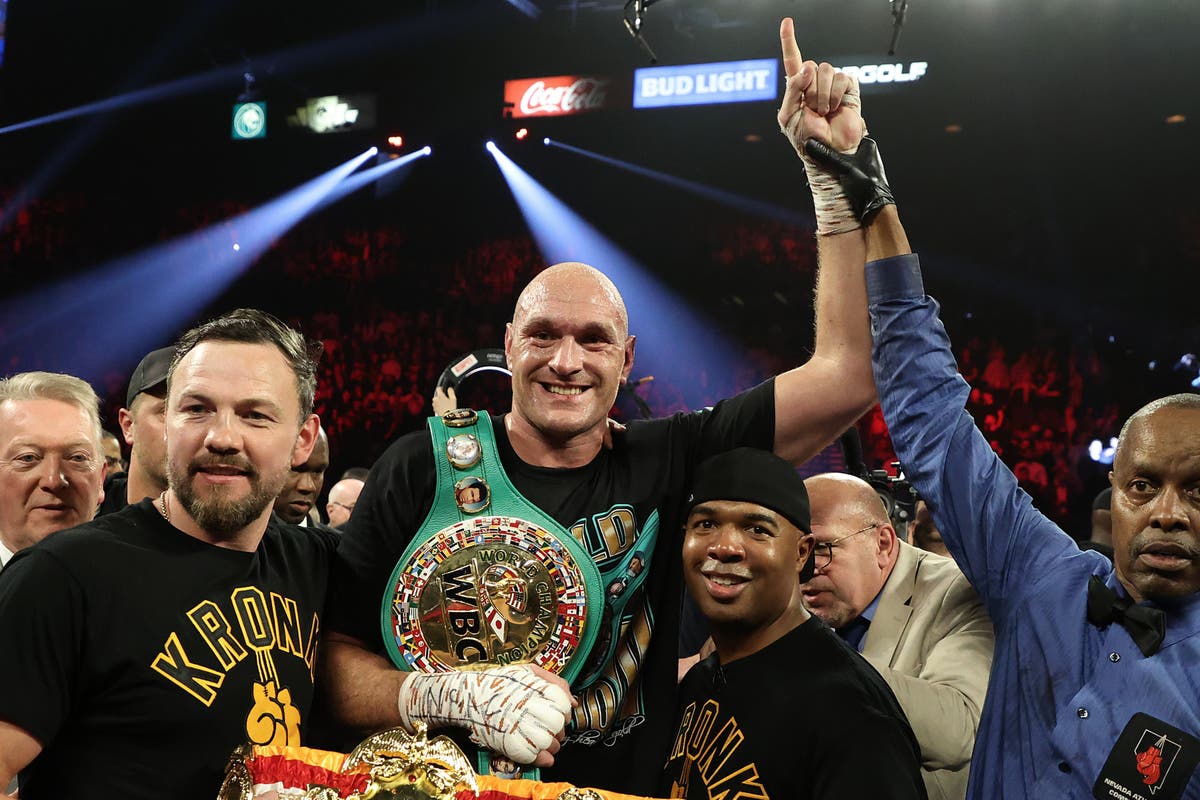 Tyson Fury has asked for the BBC to remove him from the running for the 2020 Sports Personality of the Year (SPOTY) award.

Who you do think will win Sports Personality of the Year?
#SPOTY
Click to expand...

Da' Bookie calls it right yet again . I gave up watching the Sports Personality of the Year a long time ago .

Silver Member
Ronnie O’Sullivan will spend Christmas Day at a food bank: ‘All you can do is do your bit’

RONNIE O'SULLIVAN | THE JOY OF SIX :​

Ronnie O'Sullivan | The Joy of Six

Ronnie O'Sullivan exclusive interview ahead of the Masters snooker 2021 :​

Quote .
"
Ronnie O'Sullivan has piled the pressure on Judd Trump and told the world No.1 – if you don’t win 70 ranking event titles, you’ve underachieved.

The six-time world champion has watched from the sidelines this season as Trump romped to English Open, Northern Ireland Open and World Grand Prix glory.

That 2020-21 hat-trick took the ‘Juddernaut’ to 20 ranking event titles but O’Sullivan, who is yet to taste silverware this term, still stands tall on a record 37.

Trump will face world No.13 David Gilbert in the first round of the Masters on Sunday and the Rocket, who will shoot for an eighth tournament title in Milton Keynes, told Trump it’s time to cash in on the Buckinghamshire baize. "

RONNIE O’SULLIVAN AHEAD OF 2021 MASTERS: JUDD TRUMP IS ONE OF MY THREE TOUGHEST OPPONENTS :​

MASTERS 2021 EXCLUSIVE: WHO DOES RONNIE O’SULLIVAN THINK WILL DOMINATE SNOOKER IN 2021? :​

Distraught Ronnie O’Sullivan fed up as Covid-19 forces Masters back to Milton Keynes :

World champion Ronnie O'Sullivan and John Higgins meet for only the fourth time at the Masters since the green baize giants turned professional in 1992. O'Sullivan has won twice in the 1995 and 2005 finals with Higgins emerging triumphant to lift his second Masters title in 2006. Ahead of their quarter-final live on Eurosport at 7pm, O'Sullivan explains why Higgins makes his top five of all time. :​

Ahead of a fascinating Masters quarter-final with John Higgins, world champion Ronnie O'Sullivan has named his top five snooker players of all time.
www.eurosport.co.uk

MASTERS 2021 SNOOKER: ‘I'D HAVE BEEN HAPPY PLAYING ON BIG BREAK!’ – RONNIE O’SULLIVAN ON AMBITIONS​

Ronnie O’Sullivan, winner of six world titles, told Rachel Casey that he would have been content if the highlight of his career was partaking in popular British TV programme Big Break. The Rocket made the claim ahead of his Masters quarter-final against John Higgins at the Marshall Arena in Milton Keynes. :​

Masters 2021 snooker: ‘I'd have been happy playing on Big Break!’ – Ronnie O’Sullivan on ambitions

Ronnie O’Sullivan says that his ambition as a 15-year-old was playing on popular British TV programme Big Break.
www.eurosport.co.uk

John Higgins leads Yan Bingtao 5-3 heading into the evening session of the Masters at the Marshall Arena in Milton Keynes. The Scot ran to the final on the back of some brilliant play that has come with a cue that he began using shortly after Christmas, and it has helped him rediscover some of his best form. :​

Ronnie O’Sullivan has compared John Higgins to his namesake Alex Higgins with their penchant for changing cues.
www.eurosport.co.uk

Yan Bingtao saw off John Higgins to win his first major title at the Masters, prompting Ronnie O’Sullivan and John Higgins to back him for glory at the World Championship in the future. Aged just 20, Bingtao clearly has a very bright future in the game as a lot of snooker’s famous faces creep towards retirement. :​

Ronnie O’Sullivan has backed Yan Bingtao to win “at least one or two world titles” after the 20-year-old’s triumph at the Masters on Sunday.
www.eurosport.co.uk

RONNIE O'SULLIVAN EXCLUSIVE: 'CAN YOU JUSTIFY FEELING LIKE S***?' – WHY DEPRESSION STALKS SNOOKER​

World champion Ronnie O’Sullivan is keen to help snooker confront its mental health malady during the UK’s third national lockdown. O’Sullivan has battled depression throughout his life and is not surprised to discover a number of players opening up about their own experiences of the illness during such a bleak time for society. :​

Ronnie O'Sullivan exclusive: 'Can you justify feeling like s***?' – Why depression stalks snooker

World champion Ronnie O'Sullivan discusses the importance of good mental health on the snooker table and off it during deeply unsettling times.
www.eurosport.co.uk

World champion Ronnie O'Sullivan is out to emulate British entertainment icon Sir Ken Dodd by playing snooker around the world until he keels over. Liverpool's legendary comedian and singer Dodd continued to tour the UK right up until his sad death at the age of 90 in March 2018. At 45, Rocket Ronnie would only be halfway through his career if he emulates the Knotty Ash idol's life and times. :​

Ronnie O’Sullivan: ‘I want to do a Ken Dodd, he toured until the day he died’