All this talk about tight pockets.

Silver Member
Would someone please post the Diamond table 4 1/2" pocket measurements from the factory?

Silver Member
I think the edit I made to use +.75 makes more sense than using +1.1 as the tables with lower rail height and less angle play harder as far as pocketing balls (pocket rattle).


MAJOR edit: since we know about the Olhausen death rattle using +.75 or less for the constant seems to work out
Last edited: Jun 8, 2009

Tbeaux said:
I think the edit I made to use +.75 makes more sense than using +1.1 as the tables with lower rail height and less angle play harder as far as pocketing balls (pocket rattle).


MAJOR edit: since we know about the Olhausen death rattle using +.75 or less for the constant seems to work out
Click to expand...

Thanks Tbeaux. The measurement I came up with using your instructions for the Olhausen verticle pocket angle was 5/16".

chevybob20 said:
Thanks Tbeaux. The measurement I came up with using your instructions for the Olhausen verticle pocket angle was 5/16".
Click to expand...

Yep...with the low rails that would make sense. With the 5/16" use .75 as the constant. The final number 10.9.... would make it seem tight by Rogers scale and explain the corner rattle when the pocket opening is actually fairly wide.

Silver Member
The problem with Olhausens to me is that while they play "tight" for lack of a better term, it is an unfair kind of tight where well struck shots don't go in, not because of any inaccuracy, but because of the face angle and anything else you want to throw into the mix. A shot hit with speed along a rail needs to be well aimed for sure, but it shouldn't be virtually impossible to make. In my experience, this shot is basically not available to any skill level player, at least not on the Olhausens in my pool room, and I just don't think that's right.

When faced with having a shot down the corner on an 8 ball near a rail and having to get to the other end of the table for the 9, it's a matter of deciding if you should go ahead and shoot the shot you are supposed to shoot knowing the 8 will rattle, or choosing some other play like playing safe on the 8 or hitting it softly and playing a bank on the 9. I don't think that's correct. Yes, you should have to be more precise on these shots, but the pocket should accept a well played shot.

Silver Member
From chevybob20s measurement it looks like the Olhausen has a couple of problems
The face angle appears to be 12 degrees. Re-cutting the face drop angle (vertical drop angle) to 15 degrees would make the pocket opening even larger, thicker facings could help here but there would still be a tendency for balls to "launch" because of the low rail height. The pocket cut angle appears to be right (without actually doing the math to find out for sure) at close to 142 degrees. My guess would be recutting the face angle and using thicker facings alone would just make it a loose table instead of a difficult table. To actually get it as fair and tight as possible the faces would need to be recut and shims installed. RKC is "THE" expert on the repair possibilities though.

Is there any way we could incorporate that additional information into the formula to get more accurate pocket ratings?

Hi Roger, I read your formula but have to bring a thought to you to think about, then see what you do with it. Instead of your formula, how about this. Take the mouth of the pocket measurement from point to point, then measure back 2" from the points on both sides, then measure across the back of the pocket for the cross distance...say 4 1/2 and 4"...now subtract that and you end up with 1/2". This change between the front of the pocket and the back is determined by the pocket angle opening, the greater the change the wider the angles of the pocket, the more the balls are going to reject from the pockets when they're coming down the rails. A corner pocket with 53 degree angles are far more likely to reject the object balls into the opposite facing than a pocket with 51 degree angles. Pockets change by 1/8" per angle degree change. When I extend the rails on a Gold Crown for example by 3/16" of an inch and use 3/16" facings, at a pocket angle of 51 degrees I have a pocket opening of 4 3/8", but at 52 degrees it's 4 1/2"

Silver Member
stil having trouble figuring out how to measure the downward angle. right now i have this for my Brunswick century 4.5 x 3.875 / 1.25 gives me 13.5 right? what about the cut of the plastic pockets? i think i have balls get spit out because the guys didn't cut the plastic right will leather pockets help?

DawgAndy said:
stil having trouble figuring out how to measure the downward angle. right now i have this for my Brunswick century 4.5 x 3.875 / 1.25 gives me 13.5 right? what about the cut of the plastic pockets? i think i have balls get spit out because the guys didn't cut the plastic right will leather pockets help?

It would be 13.95 or round to 14 on Rogers scale. I think that rates as tight. If you use the constant it's probably going to be the same since Brunswick seems to have used the upper angle limits(15 degrees) of the vertical pocket angle for quite awhile.

Don't know nothing about cutting the buckets. RKC or other mechs would be able to advise you on that.

Did you have to the pockets recut any on that century or was that the origional dimensions?
Last edited: Jun 8, 2009

Silver Member
OK, off the phone now now back to where we were. The greater the change between the pocket opening and the back of the pocket means the greater the chance of rejecting the balls from the pocket. Keep in mind there's a difference between a tight pocket and a tuff pocket. A tight pocket is small in the opening, but will take anything fired down the middle, the offset is that you also loose cue ball angle for position when you don't have the room to angle the object ball into the pocket. The farther away from the pocket the less you can play off angle for position. Now on the other hand, a tuff pocket is one that the object balls are going in the pockets by first coming off the facings, then into the pocket, such as shooting a ball down the rails into the corner pocket. A 4" corner pocket with 46 degree angles will accept the balls much easier coming down the rails, than say a 4 1/2" corner pocket with 53 degree angles, because these kind of angles have a tendency to force the object balls across the pocket to the opposing facing then back out again, short or deep shelf, it don't really matter.

With Brunswick Gold Crowns, starting with the GC1's all the way up to the GC5's the pocket castings all have the same width across the back of the corner pockets, so how did they have some corner pockets with 5" opening, and some with 4 3/4"....by changing the pocket angles that's how, from 55 degrees down to 53 degrees. The GC5's with the "PRO" pockets are 4 9/16" and use a 52 degree pocket angle. So take the pocket opening and subtract the throat 2" back, the greater the number the more rejective the pocket is going to be.

Facings play a major role in rejecting balls from pockets as do cushions. Take the Olhausen tables for example. The cushions are very...very soft, the facings are 1/8" and very soft. What happens on an Olhausen table is that when you're attempting to pocket a ball in the corner pocket coming down the rails, you're shooting the ball right into the outer have of the pocket facing with no rail wood support behind the cushion. When you do this, what happens is that when the ball being pocketed hits the facing, instead of deflecting to-wards the back of the pocket, it compresses the facing and cushion kind of like creating a flat spot at the end of the cushion, which in turn kicks the ball across the pocket to the opposite facing and back out again, and you don't even have to shoot the shot hard to get this "rejection" to happen. So, now comes in the role of the facings. If the soft 1/8" facings are replaced with harder 3/16" neoprene facings, these facings don't compress nearly as much when you shoot a ball into them, so the balls that would normally reject....go in because they deflect off the facings deeper into the back of the pocket.

Silver Member
I'll work on this some more tomorrow, heading to bed now, got an early start in the morning heading to IL, WI, IA then back to Diamond.

ykndoit said:
and the 'down angle' increases/decreases the pocketing of balls as well,yes?

I have a 7' diamond and my brother has a 7' dynamo. His table plays tighter than mine, especially the side pockets. Both tables have simonis cloth, both pocket openings the same. I haven't measured the pocket angle or the down angle, but I'm guessing that both of these are affecting the tightness.

Also, his cushions are alot more active than mine(actually they are TOO ACTIVE). I haven't measured the nose height on them, but I'm guessing that it has more to do w/ the composition of the rubber than the nose height as his rails has to be real close to the standard(1 1/8th"?).
Click to expand...

I'll get back to you on this one, you're not off the hook yet

I can see THAT didn't work! I've been trying to figure out a way to get a sketch into my post. Oh well, back to work. Roger

Roger Long said:
I can see THAT didn't work! I've been trying to figure out a way to get a sketch into my post. Oh well, back to work. Roger
Click to expand... 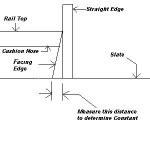 Smart aleck. One of these days I'm going to learn how to use a computer.

Yes, that's the angle I thought you was talking about. Now I want to study that angle to get it in my mind how significant it is in how tough a pocket plays. Thanks.

realkingcobra said:
Real close but you missed the down angles and what's the difference between a Valley and a Diamond bar box, not counting the slate shelf

Don't the Diamond tables have "springier" cushions which makes balls that hit the rail first hard to pocket?

realkingcobra said:
I'll work on this some more tomorrow, heading to bed now, got an early start in the morning heading to IL, WI, IA then back to Diamond.

Hey Glen, When does Dallas fall in there?:thumbup:

In the diagram, I don't understand how the "rail top" is extending further out over the slate than the cushion nose. If you put a straight edge vertically from the slate bed it is going to hit the cushion nose, right? That's not what the diagram shows, so I'm confused.
Show hidden low quality content
You must log in or register to reply here.
Share:
Facebook Twitter Reddit Pinterest Tumblr WhatsApp Email Share Link
Top