Silver Member
Hi all,
My name is Tony, I live in Italy and am not a pro rather I’m an amateur pool player. Since I’ve been playing, I am obsessed to find an universal aiming system: simple and automatic.
So I bought DVD of the most famous systems: TOE, PRO ONE, 90/90, SAMBA. But IMHO they are either too complex to learn or introduce a kind of personal judgement (such as left/right pivot, find the angle for 90/90,…). I need an unbiased system: OBJECTIVENESS!!!
So I develop this aiming system which gets rid of throw and angles!! Let’s start…

ACKNOWLEDGEMENTS
First of all I want to thank my inspirators and virtual mentors:
1. Stan Shuffet: “It’s a visual game”
2. CJ Wiley: “The game is the teacher”
3. Ekkes: Your system is too difficult for me
4. Vitello: 90/90 - simple and effective

OBJECTIVE
Create an universal potting system as automatic and simple as possible.

POT A BALL
The system is composed by phase A which is stand alone and I called “Spot”. You can use it without the phase B – Visual, but as you’ll see the B develops naturally after a lots of potting with the “Spot”. 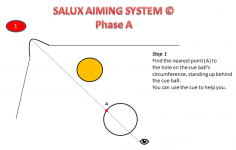 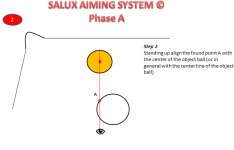 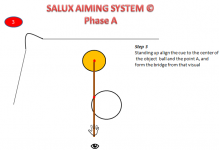 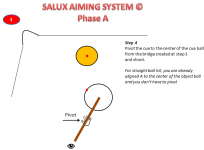 After you practice more than 50 shoots with this method, you brain develops an automatic feel for the shoot and so you can apply the second phase B of the system - Visual: 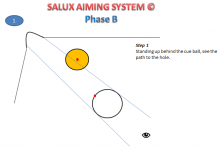 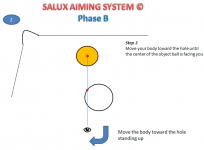 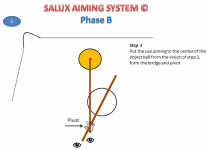 In my tests I hadn’t compensate for the throw occurred. Let me know.

WORK IN PROGRESS
Touching balls or very near balls

I hope to hear comments from you and maybe we can improve this wonderful and simple aiming system together.
Enjoy,
Tony
T

Silver Member
I will try it out tomorrow. Seems like an interesting idea
L 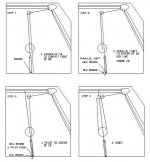 Silver Member
Thanks but I prefer mine: it's simpler and you don't change the bridge
L

salux said:
Thanks but I prefer mine: it's simpler and you don't change the bridge
Click to expand...

Good for you. Parsimony is good.
Does it work the same at 1 diamond separation as 7 diamonds separation?
S

Silver Member
Yes I can confirm that the system works in both cases.

Useful tip
In order to find the point "A" in the first step, you can put the cue in the center of the cueball and the tip towards the hole. The intersection of the cue with the circumference is point A.

SALUX, I use CTE Pro one and 90/90 . Your system does work. I hit may balls using your system and after i find the spot closest to the pocket and then put it to the OB center i have noticed that it lines you up for CTE A,B,C method. This would be great for people trying to learn CTE and if they are not sure what to use before the visual sweep ,your method puts you on the correct spot A,B or C. Thanks for sharing this and ill share any other findings.
S

Silver Member
Thank you very much for your appreciation to my aiming system.
Please consider that I followed what CJ Wiley says:"The game is the teacher". And on Friday I'll go to my pool room to take some pics to show you why my simple system works great. Maybe I'll shoot a brief video to show you my new enhancement of the Salux System: the Salux Revolution!

I intend to show you that a visual variant to this system is as good as the most sofisticated one. I really respect all the work of Stan first of all (I consider him a really genius and a mentor for me) and also Ron for his simple but effective pivoting system. But I think imho my new Revolution will be appreciated as well.
The Samba and CTE are too difficult for me. Maybe I should attend a lesson in person. What I want is a simple universal aiming system for pool based on concrete visualization properties at the table.

The Salux Revolution is based on the first Salux but the new aiming consists in a central perception on the object ball combined with a pivot. The characteristic is that you must visualize the object ball in its square face from your stand up perspective. I'll give you a simple video this weekend. I should need a camera on my head

Bye for now and looking forward to hearing your comments.

salux said:
Yes I can confirm that the system works in both cases.

Useful tip
In order to find the point "A" in the first step, you can put the cue in the center of the cueball and the tip towards the hole. The intersection of the cue with the circumference is point A.

Hope to hear your comments.
Cheers
Tony
Click to expand...

The distance of the bridge to the CB is say 12 inches.

Now let's put the OB on the center of the far rail and the target pocket is the left corner or another 90 degree cut and the CB still just to the right of the spot. So we aim the left edge of the CB at the center of the OB, pivot and shoot and miss the OB altogether

The bridge is also 12 inches behind the CB.

Perhaps this is just me or plane geometry.:smile:

Silver Member
Thank you all.
I haven’t got your remarks, LAMAS …. but if you meant that you have to change your aiming at different object ball distances, the answer is YES. Because if the cue ball remains on the same spot (and so point A is the same), the pivoting changes due to different locations of the OB’s centers.
Stated that, in this thread I would like to share some pictures to better understand the “set-up” of my SALUX system.
But first of all, I want to illustrate the concept behind this simple method in which you aim to pocket the cue ball not the object ball!!
As CJ Wiley says: “The game Is the teacher” I observed that there are some invariants in the aiming process irrespective of the angles. Indeed as you can see in the figure below (the 8-ball is the object ball, the 7-ball is the ghost ball and the 15-ball is the cue ball) you have always two lines that are invariants: 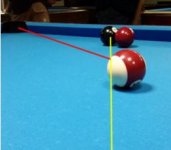 1 – Red line is the line from the cue ball towards the pocket, used to find the point A in the SALUX aiming system
2 - Yellow line is the line of the cue and also the aiming line. (It will be used as “central perception” reference line in my SALUX REVOLUTION system, which is an enhancement of this one; see my other thread) .
The intersection of the two lines is the point A: so it can be considered the nearest point on the cue ball’s circumference to the pocket.
SALUX SYSTEM:
STEP 1-Identify the spot A on the cue ball 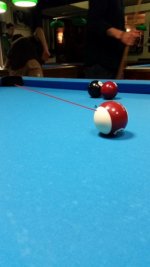 To do so, you can use the cue to help you: for instance you can align the pocket to the center of the CB as in below pic finding A: 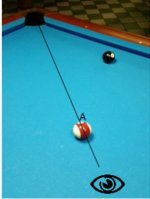 STEP 2: Having found A, align A to the center of the object ball while stand-up: 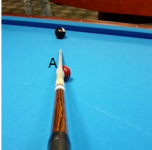 STEP 3: Form the bridge and pivot the cue to the center of the CB. 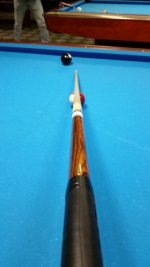 Silver Member
A simple SALUX variant helping to pocket balls and finding A, is the following:
STEP A: Align the CB to the pocket and put the cue below the inner edge (respect at the shoot) of the CB: 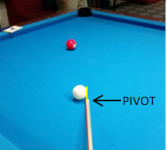 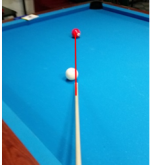 STEP C: Form the bridge and pivot to the center of the CB: 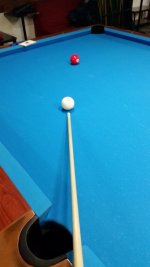 This method doesn’t work for straight shoots!!
Hope these pics to help with this system even if I prefer to do all the SALUX steps visually.
Let me know your tries.
Cheers,
Tony

Silver Member
How is this simple?
L

Sorry I misunderstood what was in front of my eyes - the pictures help.

As the OB moves down table from the CB the included angle between the target pocket to the CB (leg a) and the line from the center of the OB to the CB (leg b) gets more narrow. This narrowing at separation results in a more narrow post pivot angle of the shot line.

The genius of your system is that the aim point (A) on the CB changes with the separation from the target/pocket to the CB and the center of the OB wherever it is down table and thus the post pivot angle also changes respectively - thus, one never misses the OB.

Unlike most other systems that associate the target/pocket to the OB (what you want to accomplish), yours does not - you only need the center of the OB wherever it may be.

Aiming center of the CB (stun) requires compensation for CIT as always.

Kudos for offering your parsimonious aiming system here for free.:smile:

Gold Member
Silver Member
Hal Houle, the person I will call the father of all this, had many many many variations and systems. These were all results of his own thought experiments and practical applications on the table.

Without having tried this method on the table I want to acknowledge the spirit of innovation that exists that motivates players to run with concept of objective aiming that Hal pioneered and brought to us all.

Hal worked for free to help anyone who asked or whom he felt was deserving of his attention. I feel fortunate to be one of those who didn't ask him for help but whom he chose to give the gift of objective aiming.

So with that I applaud every effort to create, refine, and simplify ways to aim.

Silver Member
Many thanks Lamas
L

salux said:
Excuse me, do you mean my system is connected to Houle's? Because I cannot see the link ��
Cheers
Tony
Click to expand...

JB Cases was complementing you on your contribution that you offered here for free like Hal, JB, myself and others.

You are welcome and thanks for your unique system. After decades of systems taught and bought, yours, to me, is a fresh parsimonious pivoting system.