benny-the-blade said:
Help Desk emailed me to say the passes are being fixed. It will be a few minutes.
Click to expand...

Some how when all the passes got extended for the extra day it caused an issue.

Working on reauthorizing all of them now.

Should be fixed any minute guys

Sorry guys for the inconvenience.

Silver Member
Its definitely not all good yet 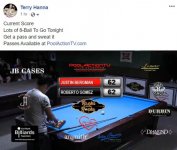 Silver Member
Then gomez loses 10 out of the next 13 games. I really think Gomez shouldn't play more than 4 hours at a time.

Silver Member
Roberto has yet to stop the bleeding...hes lost...Bergman gonna run out of games....if they finished tonight he'd win by well over 20 games

Silver Member
Thanks for the update Mikey.

Silver Member
Done for the night. Bergman up 80-72. 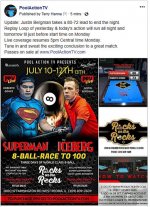 Gold Member
Silver Member
Game 140, the 10th of Bergman's 12 wins in a row, was rather unusual.

Good thing it's not a race to 1000 or we really might see something weird.

I've never seen anything like it in my life watching/playin 8 ball. I knew the moment Justin shot the stripe in the side, he was in the wrong. I was very confused as to why Gomez didn't take ball in hand at that point, but I also didn't notice that he was shooting at the wrong balls! Crazy game for sure

This was strange deal for sure.

I can't remember ever seeing this happen before.

Roberto after realizing what had happened when Justin asked about it just conceded the game.

At the end i am pretty sure Justin said he was not going to call it on Roberto after he shot all of the wrong balls.
Last edited: Jul 13, 2020

Tune in and sweat the exciting conclusion to a GREAT match. 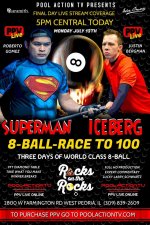 Silver Member
Are you crazy?

A- you should have called in sick.

2: 'Work treated you poorly' is bullshit. You called in last minute to play a game. see A, above.


Tin Man said:
Incidentally I was in a goofy spot once. I played a guy a 15 ahead 10 ball session. The other player and I were supposed to play straight through, i.e. if someone wears down they concede. We had arranged with the pool room owner to allow us to stay through the night if needed.

Well, play began and we played until 2am (I was +7 at this point). Unfortunately so many people had stayed around to watch that it attracted the attention of the police. They ticketed the owner of the poolhall for being open past bar close curfew and forced him to close and for everyone to leave. So the pool game got suspended until noon the next day.

Play began at noon but it changed things up a little. My opponent made a comeback and it was a grueling day two, see-sawing most of the afternoon. Finally I made a run and got a lead again but just as I was stringing some wins together at the end they had to shut down again. I finished day two +9.

Now, keep in mind I was a sales manager at a corporate job and was supposed to report back for work at 8AM Monday. But I was also in the middle of a match that was supposed to have finished well before this point. What to do? I called my boss and told them I couldn't come in. I explained the situation. This was a rare event, my track record was spotless. This match had become very important to me and there were other people involved betting and depending on me. My boss was pretty upset I called in and basically said "I'll see you TOMORROW".

Unfortunately I couldn't put it away. I ended day three just +13. Two games away. But I couldn't call in another day without literally risking my job or future prospects. I have a family that comes before pool. This lead to quite a controversy.

In the end I agreed to play after work from 6PM-2AM each day until the match was completed. If I was prohibitively exhausted due to working in the morning that was too bad, it was that or forfeit the match. This had to be negotiated between a number of involved parties.

I was SO tired when I showed up to play that night. I have never felt more pressure. I was two racks away from victory, yet if I lost a game or two and let my opponent rally back at all it could turn into further back and forth. Given the schedule we'd agreed to I knew this was as good as losing. How would you feel if you had played for 3 days to get 13 ahead and now feel like if you can't close it out immediately you almost lose by default?!?

Fortunately for me I won the first two games that night. I can't believe it. Too good to be true. It was very anti-climactic. Everyone showed up again to see round four and it was over immediately.

The point is that all of this was due to an unforeseen event with the place being shut down. It disrupted the entire plan and caused added complication. There was no way that working Monday should've been a factor in a set that was never supposed to last beyond a little into Sunday. Looking back, as tacky as it may seem to a boss to call in over a pool game, with my track record and what I did for the company I feel I was treated a little poorly. My boss probably should've told me to take off until the match finished. I mean, 5 years of being either a top sales person, a super star trainer, and then years of management blowing the doors off my goals and paving way to expand into new products, and never any drama. I think I just caught my boss on a bad day when the VP was busting their chops or something. Bad call on their part I think and just another bad roll about the deal.

Sorry this got long. I haven't thought about that for a while (blocked it out I'd say!) and it all came back as I started typing. Those were the longest four days of my life. I like to say I had three phases of my life: My childhood, my adult life, and that match. Seriously. That was the last 'ahead' set I played. Now I play sets and tournaments.
Click to expand...