Gold Member
Silver Member
While we are preparing to release our updated database with search and filter options, we have the privilege of LIVE scoring the Mosconi Cup 2016 in December, once again!
Do press on the link and you have options to:
Enter to win (no purchase necessary)
Vote for your favorite team
Learn more about the teams and The Mosconi Cup history
and don't forget to check us out when the time comes: December 6-9 for the LIVE scoring!

I hope Im wrong though and US gets more then 2.
D

Silver Member
Like both of our doubles. Was really hoping Shane would match up with Niels. C'mon Dechaine, would be a huge point if he could pull the upset.

Silver Member
Looking at the schedule on ESPN 3, it seems it's only on for 60 minutes. Hope that isn't right.
C

Silver Member
Except for the Doubles match with Shane and Rodney, have a tough time seeing a win for USA come out of these matches. I do see a possible upset for Sky and Justin, but that still seems like a long shot. Hope USA proves me wrong and shows the Euros how the game is played!

I'd say Woodward and Berg-stein are a favorite whenever they play doubles.

I'd say Woodward and Berg-stein are a favorite whenever they play doubles.
Click to expand...

That's what I was thinking.....they're already partners...and they've won.
B

Silver Member
I think Shane n Rodney r favs obviously I like Shane In singles n I think we have a shot to steal at least one more not to mention the team match is a total crapshoot I believe if team USA can start out winning the team match it could be huge cuz then Shane n Rodney could make them 2-0 n then if Mike or skyler/Bergman can pull out a win they'll be 3-1 heading into Shane's individual match which could potentially put them up 4-1 after day 1 which would be hugeeee!!!!! Any combination of things can happen In a race to 5 I'd gladly bet the underdog with odds the entire week but I look for team USA to come out of the gate with a 3 point lead after day 1-------

Silver Member
I just hope they can win the lag more than not!

Then, they need to figure out the break, short races REQUIRE both of these skills.

I hope they don't tense up, big underdogs, etc. Got to be loose to win.

USA all the way!

daylate$short said:
I just hope they can win the lag more than not!

Then, they need to figure out the break, short races REQUIRE both of these skills.

I hope they don't tense up, big underdogs, etc. Got to be loose to win.

USA all the way! 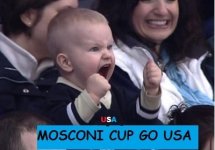 Silver Member
Hopefully 3-2 or better on the first day.

I feel good about 3-2. Shane needs to take care of business.

I'd say Woodward and Berg-stein are a favorite whenever they play doubles.
Click to expand...

Green to you, I like what you did there.
Political/modern day pool humor - nice!
A

Silver Member
I seem to post the same thing every year, but we've never had any trouble with doubles. Any path to winning the Mosconi involves turning the corner in singles.

I'll be watching the two singles matches with greater interest than the others.

Dechaine needs to find a way to stop Feijen, who may be the greatest player in the history of the Mosconi and who beat Bergman twice and SVB in last year's Mosconi in singles. Perhaps Dechaine can succeed where Justin and SVB failed.

SVB needs to beat his nemesis Appleton in the day's final match, especially to set the right tone for this Mosconi. If America's best player is, once again, unable to lead by example, it will be a bad sign indeed.

No matter how you slice it, though, Mark Wilson made the right move to play his top two players (by both 2016 Mosconi point ranking and by current Fargo rating) in singles on day one.

Surprised that Europe is not playing Shaw in singles on day one.

The Mosconi Cup is just about twelve hours away, so the time is past for predictions, but time to sit back and enjoy. Let's see who catches a stroke.

Gold Member
Silver Member
I won't make any predictions other than saying that Day One will set the tone for the rest of the MC. No question Team USA are the underdogs but how they perform on Day One will be very telling as to whether they have a chance for an upset this year.
P

Silver Member
interresting line up for day 1! guess they put jayson into the doubles to get used to the stage first and with daz the right partner for sure........ daz is the key me thinks, if he catches a gear we win it easily!
for today i think we win the team......first doubles could get very close, but i also see the edge for europe, albin and mark are rrrrrrrrocksolid and no matter how good shane will perform, i see rodney making the one or two keymistakes there......first singles also should be europes (we all know niels mosconi numbers), tho i think a upset is possible here.......2nd doubles will be the clearest euro win tonight, jayson is red hot and they will cruise to the win......and last singles is hard to say, daz is a questionmark but recently he owned shane who still has to have a good run at mosconi!
so i see a range from 3 2 europe to a very dark day for team USA which could end the cup already on day 1! lets hope for a 3 2 and a great event!
S

Working from home today and then taking the rest of the week off, yay for a surplus of unused vacation days I need to use up before the end of the year.
M