realkingcobra said:
I predict Shaws high run to be around 318, but no higher than that. He moves to many balls un-needlesy because he don't see his way through the pattern layouts well.
Click to expand...

realkingcobra said:
Wrong again midget, I explained what Jason would have to do in his game to get past that, and he did make the change after getting stuck in the 200's for so long, so eat shit and bark at the moon

There are no rules. JS proved that beyond a doubt. Gimmicked everything involved. Been given a 2-1/2 year free pass. Same professors of
faith for one player, but not for any others, who just went to a venue and played what was there.
Just saying!...
I've said my piece. Call me whomever you wish.
Click to expand...

Explain what was gimmicked??

The_JV said:
Oh excellent... you have seen proof that that particular table had 'stock' pockets...? This could put some things to bed on John's efforts
Click to expand...

I've seen pictures of those pockets, do you really believe after working on pool tables for 40 years, I can't look at a picture of a corner pocket an tell if something is off or not????

The_JV said:
Oh excellent... you have seen proof that that particular table had 'stock' pockets...? This could put some things to bed on John's efforts
Click to expand...

Here's what I know about you, your free library of getting knowledge from me just closed!

realkingcobra said:
Why, were you feeling kind of small

I only asked because you were laughing more than Fatboy was!
Click to expand...

Small throats for a small Fatboy.

Toxictom said:
I've noticed that every thread he is in he spends more time arguing and defending himself more than he does contributing anything of value to the conversations.
Click to expand...

think it's called distortion. He knows now, that Jayson can shoot 320+ . He believes it when he thinks, he would never have said otherwise. His self reflection abilities are on the level of a 7 year old, but so is the way he comes up with arguments or his level of reading comprehension.

and if he can perform a calculation, that would be difficult for some 7 year old like 142 - 135 = 7 then he really thinks he is the smartest guy in the world.
A

iusedtoberich said:
... For years, even the specs had huge typos on them, and no one even cared from their specs department. The typo had to do with the tolerance. It was something like 5" +/- 1/8", and got retyped years later as 5" +1/8". That typo was in all the dimensions that had tolerances, and was around for a good 20 years, probably longer. ...
Click to expand...

Yes. Supposed to be +/- I think Bob or someone rewrote it about 5 years ago (correctly). There might be a newer version floating around.

Edit, and I couldn’t recall if the typo was also on the WPA spec, which was probably copied from the BCA spec in the 90s.
B

Patrick Johnson said:
Where's the proof of that?

realkingcobra said:
The Brunswick gold Crown 3 uses the same miter angles and same 5" corner pocket opening that the centennial and anniversaries used in the forties
Click to expand...

Well son of a bitch!

Why didn’t you tell everyone this earlier dammit.

This is the answer everyone has been looking for including yourself.

Can anyone measure the angle on a GC 3 and put this to rest.

God dam…all this bullshit and you had the answer the whole time you salty bastard.

middleofnowhere said:
This is not to add any controversy but I just went on YouTube and I watched one of John's 400 plus runs. There is no doubt he plays beautifully and the table he was playing on the balls didn't break exceptionally easy they just looked like playing pool in a pool room.

Here's the thing I noticed though that I found a little odd. There's people in the room watching The run and they're talking and John's talking.

At points they actually discuss what to do on the table. In other words at one point John got too long and had a long straight in shot and they were discussing the possibility of different balls that might be dead in the rack.

I don't know about this, I know if you catch a record-breaking fish nobody else better touch that rod. The run I'm talking about on YouTube is something like 426 or 436 but there's points in the run where there's like collaboration on how to get out of rack.

I don't really know what to think about that. Set a records playing with coaching? Is his 600+ ball run up anywhere to watch?
Click to expand...

realkingcobra said:
Here's what I know about you, your free library of getting knowledge from me just closed!
Click to expand...

Oh... thought that happened a while back...lol.

Frankly if asking a question in a polite manner is all it takes to burn your willingness to provide insight. I got to wonder how much I should trust the advice I've been blessed with. Fortunately I've managed despite it thus far.

You are a weird bird.

I’ll pass on that. Lol
T 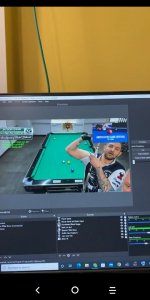 I actually ventured to it earlier. He pulled a RKC and made a back hand comment that stirred his own pot.
7

Unfortunately, they miscounted somehow: Jayson was only at 625 there. When you start a rack, there are 15 balls on the table. When someone told him he had beaten 626, and he celebrated by showing his bicep to the camera, there were 6 object balls left on the table, i.e. there were 9 balls in the pockets. There is no amount of racks plus 9 that adds up to 627 balls:

If he had missed the next shot, which he shot by stretching out diagonally on the table with a 30" bridge and poked at the ball, I think he would have been pretty disappointed.
Last edited: Jan 18, 2022

wayne said:
BUT NO HIGHER THAN THAT!"
Click to expand...

I never said that, YOU did to try and make yourself look better you dumbass!!!

Straightpool_99 said:
The process was to my knowledge as you described, though I haven't done a whole lot of research.

The fact that the organizations are completely incompetent is not an unavoidable thing, but a result of lazyness, corruption, greed and general idiocy. In pool we are so used to this, that we believe that is how everyone operates. The lack of respect for the guidelines is not from any inherent problem with governing bodies, but the fact that the governing bodies have had the above qualities for so long that any respect has been eroded away. Other sports have governing bodies that actually do their job, so people do in fact listen to them. We could have had that in pool as well, but we'd probably need a firing-squad type of solution and start all over again.

My proposal would be as follows: Elected representatives from the pro players would agree on the specs and have a template made. For leagues a similar system. Testing period one year, if needed an adjustment, then a five year moratorium on changes (to benefit manufacturers). The template would be such that every angle of the pocket would be locked in, along with shelf depth.
Click to expand...

Why would you rely on pool players to decide the pocket geometry, shit, 99% of all of you posting here don't know shit about the pocket geometry, so why not just leave that up to the table manufacturers, at least most of them know what they're doing!!!
Show hidden low quality content
You must log in or register to reply here.
Share:
Facebook Twitter Reddit Pinterest Tumblr WhatsApp Email Share Link
Top