I had a fun time at the IPT

Silver Member
I want to thank everyone for all the kind words on the forum, and in emails that I've received. Last night was a really fun time sitting in the booth for an hour or so.
I had only done pool commentary once before, and that was way back in 1995 or 96 I believe. It was at one of CJ Willey's events in LA, and I got to do a little commentary with Tony Annigoni.

I had a good time doing it last night, and it was fun working with Mike Sigel. I know he got on a lot of people's nerves, and Sigel says a lot of egotistical stuff, but to me it's mostly a part of his shtick. He said most of it with a big smile on his face. He has a huge ego, which is what made him such a great player in his day, and now he enjoys bragging. It didn't bother me, in fact I actually enjoyed it. Maybe that's because I was there, and because I have a pretty high tolerance for people like that.

Grady's commentary was and always is excellent.
It was great to finally meet him after all the years I've listened to his commentary on Accu Stats. We even made plans to get together and practice a little the next time he comes to LA which I look forward to very much.
Congrats to Tony Robles! He's a great player, and a really nice guy. I've known Tony for over 15 years now, and he's one of the nicest guys in the game and a credit to his profession.

Silver Member
Fun at the IPT

Were you surprised when Mike beat John? Although a very short race it at least (to me) showed Mike could still play very well.

Gold Member
Silver Member
Joe, you're a stand up guy all the way!

Silver Member
Deno Andrews from the IPT had been telling me that Mike had been playing really well lately. He ran 200 balls last week, and he had been practicing a lot. I wasn't surprised, but John was certainly the favorite coming in.
It would be really nice to see Mike competing again. I hope he continues to do well.

jay helfert said:
Joe, you're a stand up guy all the way!
Click to expand...

I asked him one time who was the best player he had aver seen? He said it was Mike Sigel when he was in his prime.

Mike showed he can still play with the best of em.

you heard the man

Silver Member
the only thing that would make that picture cooler would be if you had Grady in an armbar :grin: :grin: :grin:
M

Silver Member
Others have said it, but I really enjoyed the broadcast last night and your participation was a big part of the reason.

I have to deduct 1 point because I thought I heard you ask if Tony could play safe by shooting Karl's ball in.

Silver Member
Yeah, I didn't think he could do that, but I figured if I even had a question about it, other people might be watching that weren't sure either.

Silver Member
Your commentating was the high-light of the match,you asked alot of imformative questions.A job very well done and I hope to see you in the booth again.Thx Joe.

Joe Rogan said:
Yeah, I didn't think he could do that, but I figured if I even had a question about it, other people might be watching that weren't sure either.
Click to expand...

YOu owned mike when you called that one shot, the ball hitting the rail then hitting the back of the stripe and going in. That was pretty sick, and they didnt give you any credit for it! 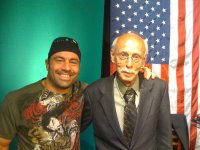 I can't believe how different you look in a suit.

Gold Member
Kick ass job Joe. I really liked your questions to John about low deflection shafts and his thoughts on them....and the TAR plugs....those were pretty cool. Thanks. You and John were very solid together.

One of these days we have to get you either in the booth or in action in a TAR match.

JCIN said:
Kick ass job Joe. I really liked your questions to John about low deflection shafts and his thoughts on them....and the TAR plugs....those were pretty cool. Thanks. You and John were very solid together.

One of these days we have to get you either in the booth or in action in a TAR match.
Click to expand...

I would love to either be in the booth for you guys or do a match.
Hopefully someday we'll work it out.
H

Was the intention to have you stay in the booth for the entire time, or did it just happen?

Silver Member
I missed it!

Damn! I missed Grady's commentary, then I went to bed before I heard Joe or John commentating. I think Mike's an interesting personality, but I don't learn as much from him unless there is someone else there to pry the information out of him. Grady and Billy I. are much better at informing the viewers IMHO.

Silver Member
Wouldn't have been the same w/o Joe in the booth. I would have had to turn the sound off.

How much do you owe for the "lessons"?

HI2AZ said:
Was the intention to have you stay in the booth for the entire time, or did it just happen?
Click to expand...