Snooker Theory said:
I am guessing it rhymes with either Dustin or Jean, :thumbup:
Click to expand...

It was Justin. He sealed his fate with the PA pool hall comment. He’d made it before under several different aliases.

Shawn Armstrong said:
It was Justin. He sealed his fate with the PA pool hall comment. He’d made it before under several different aliases.
Click to expand...

OK that was some serious trolling. I hope he doesn't find IP masking software.
S

TATE said:
OK that was some serious trolling. I hope he doesn't find IP masking software.
Click to expand...

A hyena can dress up as a tiger and fool people for a little while. Eventually, the laugh gives them away. He can’t help himself. He breaks character for one second, we will pick up on it.

I can’t, for the life of me, imagine being so desperate for acceptance, that I am consumed by being on this group. I’ve taken months away from the board, and was ok with the break.

Silver Member
Apparently it's just a suggested rule. I assume that's what the red means? 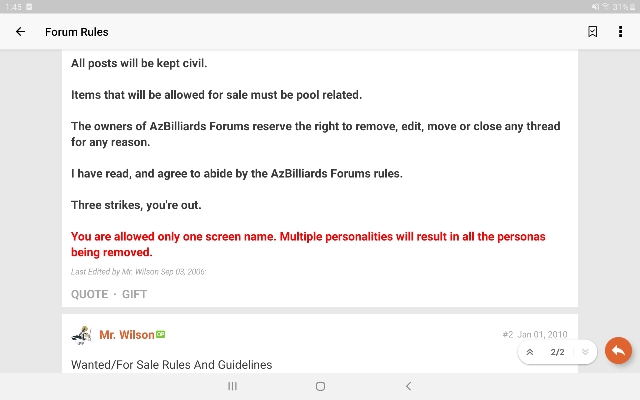 Staff member
Admin
Moderator
Basically it is meant for people who try to skirt a ban by creating multiple accounts, or someone who creates another account for scamming purposes. There have been those who had multiple accounts for completely innocent reasons and when I find out about it, I let them decide with account will stay and which will be folded into the other account.


logical said:
Apparently it's just a suggested rule. I assume that's what the red means?

Silver Member
What if a poster was diagnosed with multiple personalities.
Could they then have several screen names?

garczar said:
Read enough of his s^*t and you'll see he's either delusional or just plain ignorant.
Click to expand...

measureman said:
What if a poster was diagnosed with multiple personalities.
Could they then have several screen names?
Click to expand...

Yes, but then shouldn't each personality take on a different tone?

Sent from my Pixel 3 using Tapatalk

There was another shootingarts account for awhile when this one quit working. However, the name itself made it obvious that I wasn't trying to sneak around with a second account as did my first post.

Often the clowns that think they are clever don't realize that Admin and Mod's can see more than standard users. A person thinks they are hidden when they might as well have a brass band behind them!

One guy that was particularly annoying on my forum worked for a huge aircraft company and often logged in through their servers. After months and repeated warnings that I would, I called the IT department where he worked and told them to take care of the problem for me. They did. A hint, if you are going to engage in illegal activity, don't go through your work server!