Silver Member
Has anyone tried out the new cue holders made by Ellen Van Buren? Basically, they are a piece of that grippy material we used to use on the shelves of our RV so things wouldn't slide around.

I passed by some at the dollar store and one was a really pretty salmon color so I bought it to try out. I cut off a piece and stuffed it into my already full case pocket. I brought it out and tried it first on a round table and it worked dandy! I just draped it over the side.

One side seemed grippier than the other, so I put that on the table side so it wouldn't slide around. Of course, if someone were to run into your cues, they would fall over, but for holding them upright, it's just fine, doesn't take up any room and is very low tech (as opposed to my other one that folds into a little puzzle, but holds 2 jump cues off the floor).

Ellen's version is prettier, with a band of logoed ribbon across the top, but I can't remember what she calls them. I saw her original one in Seattle but no one told me where to find them. Anyway, it is a nice, cheap, lighter alternative to everything else.

Silver Member
Do you have pictures or a website link for her product?
1

Silver Member
do you have pictures of your little puzzle one?

I know that I have seen several of them at the OB Cues Ladies 9 Ball Tour stops. All the girls that have them really like them.

It's basically a piece of the non slip shelf liner material that you are talking about, but the back edge of it is wrapped around a weight of some kind to make it stay in place. It works on friction, and does a great job!

No, otherwise I would have given her the credit. Found it, here it is: http://www.strokinstyle.com/
Last edited: Aug 19, 2009

100kbet said:
do you have pictures of your little puzzle one?
Click to expand...

I will take some pics and post. I got it from a guy in Canada that makes them. Someone here wanted one and was able to get one too. They are nifty and I use it for longer tournaments.

This is how much room it takes up in the pocket of my Talisman case. 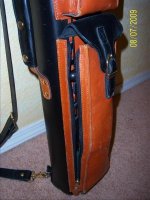 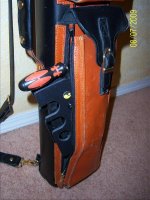 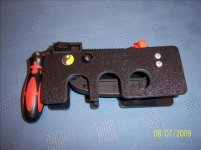 Turned over on its back 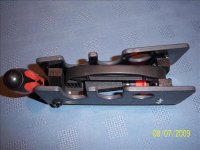 The other side. He engraved Wonder Woman on it, but not too great. 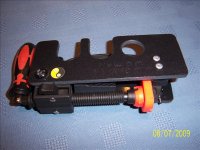 Silver Member
The other side 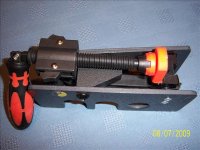 With the wings extended 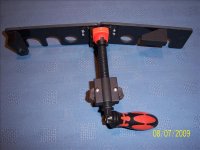 If you squeeze these releases, the handle lowers and reveals the space you will clamp onto the table 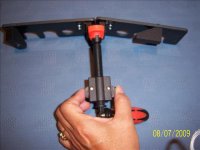 Here it is after I lowered the handle. 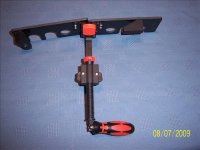 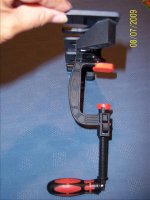 Silver Member
Clamped to a table surface. Just push up on the handle then twirl it around a couple times with one finger to tighten it to the table. Cushions are still unextended here. 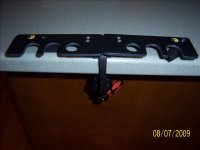 Looking down from the top with the cushions extended. Works on a round table too. 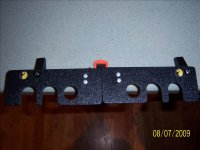 With 2 cues, jump cue and bridge supported. Still room for another cue and another jump cue 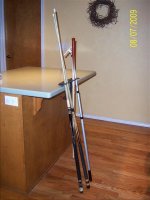 Man, I better get my cue cleaned up! 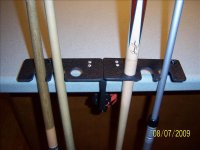 To detach, simply unscrew the handle a couple of turns (can be done with one finger) and then squeeze the release triggers which drops the handle, then slide toward you 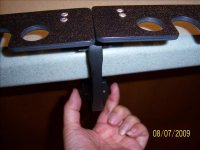 Silver Member
Here it is detached from table 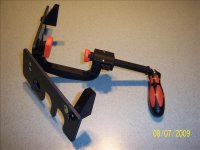 Putting it back together is the tricky part. Here it is closed with no adjustments yet. 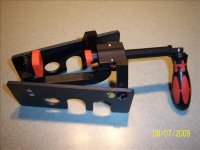 Same, but from another view 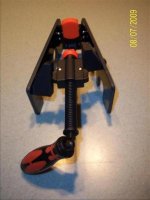 And another view. I am not squeezing, merely holding it together for the picture, otherwise, the wings would flop down 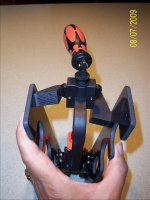 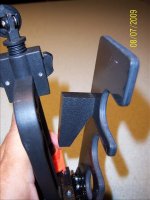 Silver Member
Now I have closed that side to show how it collapses and fits in the hole. 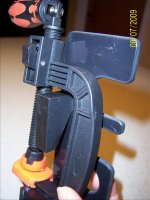 The other side before twisting the little piece. It has its own little hidey hole. 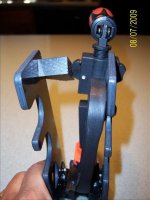 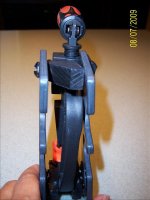 Twist the handle in the same direction and shove it down and it is ready to go back into my case. 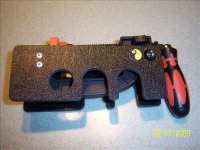 Aren't you sorry you asked???

Silver Member
That is some contraption. I like gadegts and that one took some thinkin.

My favorite cue holder is: a think piece of leather, THICK, piece of leather and cut a 3/4 round hole in the edge for the cue to rest in. Get some reusable putty at Lowes and stick a piece on the bottom of the leather. It'lll hold real well for several uses and then the putty will need be replaced. Probably 25 or 30 uses before a whole new package of the putty is needed. It's sort of like silly putty in consistancy.

Silver Member
Most guys use the mats to line their toolboxes with.
Won't keep the cues from getting knocked over but it will grip them enuff to keep them against the table and protect them as well. A small square rolled up won't take up much real estate in your case either. Good idea.

Silver Member
For those that want one of these folding contraptions, I am getting the contact info from a friend that I referred to another friend to get it. They will get me the info when they get off work and I will post here.

The Canadian maker also has a great chalk holder. It clips onto your pocket or waistband and is like the magnetic ones except it clicks on like a cell phone holder so it doesn't get knocked off.

Hmmm, speaking of a knock off, I noticed the dollar store had a bunch of cell phone clips too. Wonder if I could convert them, lol.

Addicted to the Sport

rackmsuckr said:
No, otherwise I would have given her the credit. Found it, here it is: http://www.strokinstyle.com/
Click to expand...

Cute. Simple. Easy to roll up and carry. Cute.

Silver Member
I bought one and then got to thinking about the idea.

I had some tool drawer liner that was almost the same material as this stuff. I folded it over at the top and left enough room in the folded over part to hold a plastic bag with my tip tool, a file and some other stuff all rolled up in a plastic bag. Then I rolled up the cue holder section and staped it in 2 places so that the partitions held a cue snugly. I'll get a photo.

wow, that holder is tricky it seems, if you are looking for something less bulky, yet still sturdy and holds 4 cues check out the cue-it-up cue holder. It is reversible from 8ball to 9ball, holds 4 cues and an extra cue ball, it easily clips to any surface, extremely lightweight and comes in 6 colors. PM if interested

Gold Member
Silver Member
Along the lines of DIY cue holders that aren't bulky a bean bag also works. I have used the shelf liners, and also the rubber cell phone pads for dashboards.

I have designed a combo bean bag and sticky rubber cue holder but not made one yet so anyone who wants that idea feel free to run with it.

I also seem to recall that someone was already making a bean bag type cue holder and selling them at Valley Forge a few years ago.

We do also sell a version of the lead weighted rubber one that works well and fits in most cue cases. The Slippy Grippy -